SYNOPSIS:  Jared Stevens, the newest incarnation of Fate, is sitting around and getting an earfull from his ex-wife about how she is tired of him.  As he goes to answer the door, suddenly, he finds himself immersed in a vision of what he describes as "ancient Egypt," but just as quickly the vision is gone.  Jered's friend Burnsteel and his ex argue even more than she and Jared did. Jared begins to wish to be anywhere else and encounters a man in a trench coat who causes him to transform into his Fate costume then whisks him away to a magical limbo realm.

While in this realm, Fate is confronted by representatives of magic--Bloodwynd, Felix Faust, Strega, Sentinel, Doctor Occult, Qbala, and Master Ashram, among others.  They seek to learn how Jared acquired the powers of Fate, where he stands on his approach to Order and Chaos, and the overall state of magic.  They quickly determine that if Jared has managed to alter the artifacts of Fate then perhaps Order and Chaos are in a state of flux (or no longer exist at all).  Jared overpowers them by figuring out that none of them are physically there and shatters the magical plane where they are battling.  He is encountered again by the man in the trench coat, who reveals himself to the Phantom Stranger.  They decide that the best approach is to be wary of others, for now.

Back in reality, Jared's ex-wife has called an ambulance for him. He awakens and makes a call to Burnsteel.  Meanwhile, someone named Chet is chatting via computer with Burnsteel. Cut to a big reveal that Chet is some form of undead who can't wait to have an encounter with Mr. Stevens. 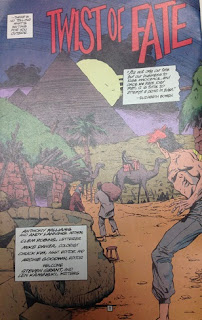 MY THOUGHTS:  Considering the reputation this series has, this actually isn't a terrible issue. The cover is an immediate attention grabber, showcasing the multiple guests in the issue.  As a huge Alan Scott fan, I knew I'd want to give this one a try, despite the overall negative reviews of the series as a whole.

Grant and Kaminski took over writing duties from John Francis Moore starting with this issue and it seems like they were trying to take the book in a slightly different direction.  By bringing in both established and newly created magical characters in their first story, it shows an attempt to more firmly ground Jared Stevens in the overall DCU and form a connection to some of these magical characters.  Bloodwynd is an interesting choice, as he was revealed to be a magical character a few years earlier but relatively unused between then and this point. 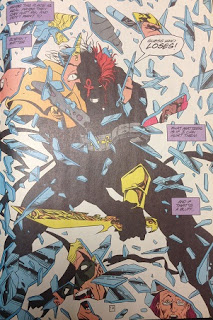 As for how the plot connects to the Fate series overall, I'm really not sure. I never followed this series enough to see how it played out.  However, just taking this issue by itself we can see that Jared still wants no part of the magical world outside of how it can benefit him. Even then, he would probably rather do without the powers of Fate.  With that in mind, he does manage to hold his own pretty well on the magical plan against the likes of Sentinel and Felix Faust. 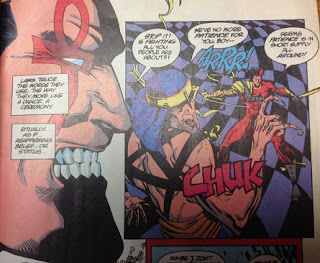 The art team does a pretty good job with most of this issue.  The art style isn't exactly DC's house style of the time, but it's not unique enough to stand out on its own.  This isn't necessarily a bad thing, though.  It gives the appearance of making Jared's feelings come across in what the reader can see.  He just wants to be left alone and be allowed to be his own man but instead gets drawn into this larger magical world.  The art becomes a blend of personal style and status quo that brings to life a portion of the comic world of the DCU. 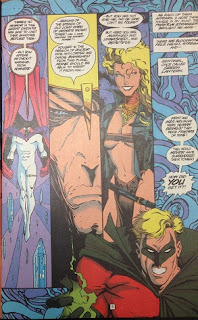 A few things of note do happen.  Alan Scott is going by Sentinel at this point, but his costume has neither the classic Green Lantern symbol nor his later Starheart symbol.  I'm not sure if this was common or if it lasted for long, but it does stand out.  Also, his cape is drawn differently from the normal way during this time as the sides near his head are lower and less pronounced.  Felix Faust's costume design is a mix of his classic evil sorcerer outfit and something more akin to a dark fantasy horror movie.  Again, I am unsure if this look was common, but it is interesting and draws the reader's attention toward him.  Phantom Stranger's look is also different from his traditional outfit, which wouldn't bad but with both him and Doctor Occult in the same story, with this design it is hard to tell the two apart at a glance.  Reading the story doesn't make it difficult, but if someone were to just skim through without paying attention it might lead to confusion.  However, on retrospect, the differences in design may be something related to the plot.  Fate determines they are in a magical limbo where the others may not actually be.  These may be magical constructs that appear just similar enough to the real thing to be mistaken for them, but not actually any real representation thereof.  Or I could just be trying to win a No Prize by explaining something that really doesn't need to be.

Strega and Qabala both first appear here and may have shown up again later on, but the other characters seem to act as if they have been around for years.  Strega is obviously eye candy, but she also seems to be a chance for the artists to play around and have a little fun with the issue. 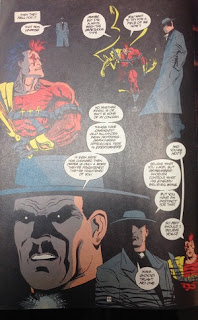 Overall this is actually a mostly strong issue for this very 90's series.  The plot and art both are pretty solid, with a few exceptions along the way.  When Jared turns the whole magical inquiry thing on its head and shatters the magical reality it takes a well-plotted (although obviously intended to be short) encounter and turns it into a chance to demonstrate just how much better the title character is and how much his angst and 90's extremism will benefit him.  As for the art goofs, I get that not adding style to Phantom Stranger's face is a good thing.  However, if nobody is familiar with who the Phantom Stranger is, how are they going to get this reference? Instead they are more likely to assume the artists got lazy or have a sloppy style for a few pages.  Otherwise, lines, colors and shading are all well done.  No, this comic isn't a shining jewel in a crown of DC greats, but it tries very hard to prove that Fate was something fans should consider as a legitimate 90's successor to the magical world of DC.  I'm not entirely certain it succeeded in its attempt, but this is still an issue worthy of being read if you are a fan of any of the characters that appear within.  It may not fill your day with excitement and thrills, but it's not an issue you'll want to discard mere moments after opening either.  As Professor Alan would say on his Quarter Bin Podcast
, "Is it worth twenty-five cents?"  Certainly.  In other words, if you are interested, give it a shot. After all, it could be you fate.
Posted by Clinton Robson at 2:52 AM