SUMMARY:  Spider-man has been on the trail of the Red Skull, who he believes has information related to the sudden appearance of his previously-dead parents.  Along the way Spider-man has noticed somebody following him, who turns out to be the mercenary/vigilante known as Solo.  The two agree to work together as they have a similar goal. Entering the nearby fortress the encounter not the Red Skull but instead Taskmaster, who has been training new soldiers for the Red Skull.  These soldiers are known as Death-Shield, the Jagged Bow, and the Blood Spider--evil analogs of Captain America (or USAgent), Hawkeye, and Spider-man, respectively.  Solo and Spidey make quick work of the knock-offs while Taskmaster escapes.

Spider-man and Solo come across more information about a terrorist plot and aim to shut it down before it can be carried out.  A firefight ensues but the terrorists are defeated. Peter tries to access information about his parents on one of the computers but the computer gets shot before he can find out much. Spidey and Solo part ways and as he swings away Spider-man has a faint tingle of spider-sense (which he ignores) concerning a small spider-like spybot. 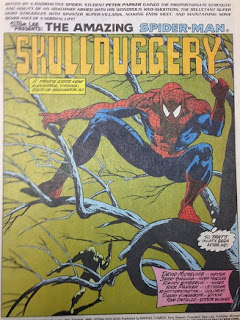 MY THOUGHTS:  I remember buying this issues off the rack.  The cover easily grabbed me, even with the inconsistencies between the way the villains appear on the cover and the way they look inside the issue.

Michelinie's story is pretty straightforward.  It's a typical superhero team-up tale of two conflicting ideologies coming together by happenstance and working together to try and accomplish a more or less mutual goal.  Solo is pretty much the Diet Pepsi version of the Punisher.  Wait, that's not accurate to my true thoughts.  He's really more of the Diet RC Cola.  Just a tiny step up from store brand.  Seriously, it feels like "Oh, editorial said I can't use Punisher this month. Guess I will change it to Solo."  But that's just me. I'm sure some people might be big fans of Solo.  I have no room to judge that opinion.  (Trust me, I still like Thunderstrike. I have zero room to judge.) 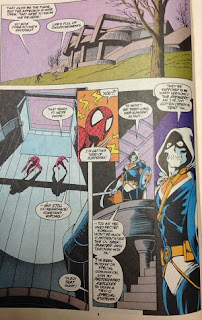 The story doesn't tell you anything about who Taskmaster is or what he does. Honestly, as a pre-teen I thought he was the Red Skull's kid who had a flare for the dramatic, despite his hoodlum dialogue.  Two skull-faced villains in one issue? How was I to know differently? And the names of the new villains--Death-Shield and Blood Spider could only be more 90's if they have random Y's or some sort of technological reference like "cyber" or something.  The designs, however, aren't that bad at all.  As I mentioned there are color differences between the interior and the cover, but the overall designs are the same.  Death-Shield looks much more like a gladiator inside, Jagged Bow just has a palette swap and Blood Spider stops looking like the symbiote costume and more like a skewed Spider-man 2099 color design. 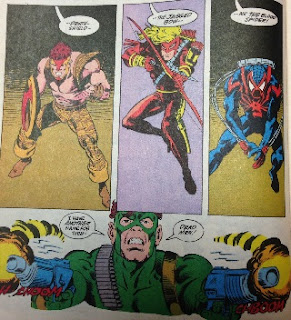 I found a few things particularly interesting about the story.  For starters, Spidey convinces Solo to be non-lethal throughout the adventure. That's a pretty big undertaking in and of itself.  This guy almost gets a jolly out of plugging the bad guys.  Second, we get to see Peter at the Bugle without Jameson yelling at him, as well as Red Skull and Viper actually contributing to the story instead of just bringing in readers because they got name-dropped.  And then we get left with a hook at the end which teases the coming of the Spider Slayers.  You can stop at the end, but do you really want to? This serves as a good one-and-done story in the middle of a larger arc. The art is pretty much Marvel standard for the early 90's, which is not bad at all.  Bingham does an excellent job of bringing all the characters to life. I am curious if the colors and designs for Taskmaster's team were a collaborative effort or just something that one member of the creative team came up with.  Considering that I am pretty sure none of these characters ever showed back up, I'm willing to bet that is wasn't a huge discussion point in meetings.  It would have been interesting for those three to have formed a team similar to the Wrecking Crew. 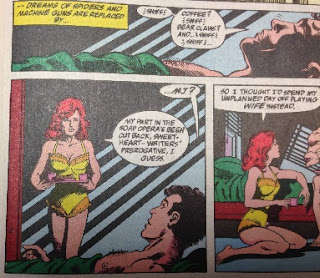 My main complaint is that we have the Mary Jane cheescake panels that were very typical of the time.  She appears in her yellow lingerie, which readers of the time will recognize as something rather commonplace.  It isn't drawn quite so detailed as other artists around the time had drawn and will draw after this issue, so it isn't obviously pin-up material, but the point of making her only appearance in the issue be in her lingerie and then draw it as undetailed as possible seems like a failure on both approaches. Is it necessary for her to look this way or is it to entice young pubescent readers into buying the book?  Is this scene any less deserving of the otherwise fantastic art skills?  Was this a last minute edit because another scene fell short a page?  The mystery is almost as vexing as Spidey's parents being alive. (SPOILER: They are clones.)

Another complaint is that the fight with the terrorists lasts longer than the fight with Taskmaster's team.  If these guys are supposed to be mimicking the Avengers, shouldn't they fight at least half as well as them? 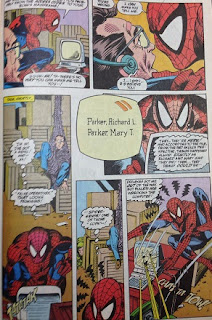 Overall this is actually a really good issue.  If it weren't for the inclusion of the Parker Parents story arc, it could honestly function as an issue of Marvel Team-Up.  Not sure how well "featuring Spider-man and Solo" would sell, but considering I bought this issue I guess the cover could make up for the poor character choice. The issue has actually aged fairly well, but it's not something to pay high price for.  If it pops up in a cheap bin, I say go for it, especially if you have any interest at all in knock-off versions of superheroes.  It's worth the read for kitch value alone. 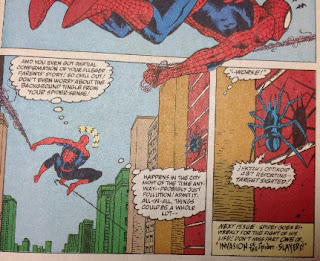 Posted by Clinton Robson at 2:34 AM