This week I have decided to take a look at three short mini-comics that were included in the earlier waves of the Super Powers figures released by Kenner in the early 1980s.

CREDITS:  All issues uncredited but Sean Kleefeld puts forth that "an ad agency hired out by Kenner. Although some of José Luis García-López's [praised be his name] and Dick Giordano's work was used throughout the Super Powers line, these comics don't seem to bear any of their artistic hallmarks."

Across the world power is being drained away from large buildings and vehicles.  The culprit? Mantis, the energy vampire, loyal servant of Darkseid.  His goal? Drain the world's energy and transfer it all to Darkseid on Apokalips.

Mantis detects the approach of the heroes and has had time to prepare a plan.  As Martian Manhunter and Red Tornado attack, Mantis uses his energy powers to somehow manipulated the android Red Tornado into attacking his friend.  Reddy and J'onn use their powers to move and counter each other.  Meanwhile, outside the fortress, Aquaman is summoning whales to help him assault the base. 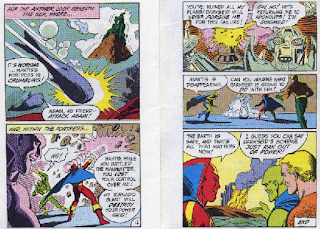 Inside, Mantis knocks J'onn prone.  However, Aquaman's plan has worked. The whales have been ramming the island's frail underwater supports, causing earthquakes inside the fortress.  The earthquakes cause Mantis to lose controll over Red Tornado, who in turn uses his control over wind to destroy Mantis's power grid.  With his plans ruined, Mantis is recalled by Darkseid to face a fate far worse that what the heroes had in store for him.

One night, inside the Hall of Justice, headquarters of the Justice League, Dr. Fate meditates upon his duty to guard mystic artifacts of power from the forces of evil.  Fate's crystal ball begins to glow and show him images of his friends Superman and Martian Manhunter approaching his inner sanctum for what appears to be a friendly visit.  As Dr. Fate begins to show the two some of his artifacts, Superman turns and strikes the mighty wizard.  Superman and Martian Manhunter begin to steal the mystic artifacts for their new master.


On the floor, a stunned and shaken Dr. Fate can not believe his friends could have turned against him.  Again his crystal ball glows and shows him the source of his friends' malady.  It seems Darkseid, ruler of Apokalips, and his servant Desaad managed to brainwash the two heroes in order to steal mystic artifacts, because Fate's sanctum only allows friends.

Superman and Martian Manhunter, realizing Fate has regained his composure, turn to attack their former ally.  Fate quickly dodges their assault and turns his magic powers upon Superman, causing the Man of Steel to remember who his friends truly are.  Martian Manhunter, seeing that Superman no longer serves Darkseid, vows to take out Superman as well.  Superman sets that parchment that Martian Manhunter is holding on fire, momentarily weakening the Martian, allowing Dr. Fate enough time to free Manhunter's mind as well.

On Apokalips, Darkseid is enraged over his loss while the heroes all enjoy a hearty laugh over the whole affair. 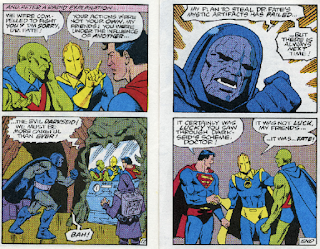 High above the skies of New York, Firestorm is creating rings of fire for his friend Green Arrow.  Green Arrow is attempting to test a new flying vehicle called the Delta Probe.  As he easily navigates the fire rings, Green Arrow receives a distress signal but doesn't know who sent it as it cut off in the middle.  Firestorm uses his powers to remake what remains of the signal into a trail the pair can follow.


The trail leads them past the Brooklyn Bridge to see that the Statue of Liberty has been changed into a statue of the evil Darkseid.  Out of nowhere a figure swoops down and assaults Firestorm and the Delta Probe.  It is Mantis, the energy vampire!  Mantis's attack casuses Green Arrow to lose control of the Delta.  Despite being in pain, Firestorm manages to focus his powers enough to transform some of the water below into a rubber raft to cushion the Delta's fall.  Firestorm also transforms some of the air around Mantis into steel chains, but Mantis easily breaks free! 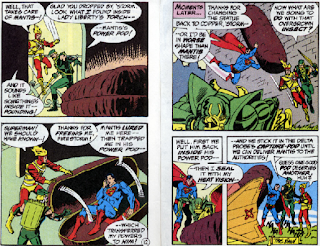 Mantis reveals that he has powers that mimic all of Superman's abilities, proving to be more than a match for Firestorm in one-on-one combat.  A timely flash arrow from Green Arrow distracts Mantis enough for Firestorm to put some distance between himself and the energy vampire.  Reasoning that Mantis might also have Superman's weaknesses, Firestorm transforms the entire statue into kryptonite, causing Mantis to weaken drastically.  Green Arrow discovers Mantis's power pod within the torch of the Statue of Liberty.  Inside the power pod is Superman, which is how Mantis gained those abilities.  Firestorm returns Lady Liberty back to normal while Superman and Green Arrow place Mantis back in his pod, seal it shut, and place the pod in the Delta Probe's capture pod to be dealt with afterward.

MY THOUGHTS:  These stories are absolutely, without a doubt, wonderful!  Simplistic? Yeah, but they are mini-comics packaged with action figures aimed at children.  They aren't going to be overly complex or delve deep into a character's backstory.  There's no real time or room for that.  Plus the kids might not necessarily have the needed experience with the characters to understand a ton of references.  Instead, the plots of these stories focus more on the kinds of scenarios a child (or some "adults," like myself) might act out while playing with these heroes and villains. 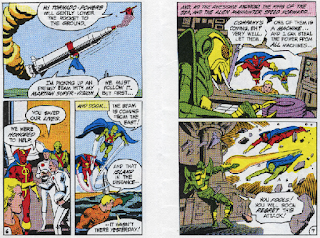 Most characters and vehicles featured in the Super Powers stories were additional products available for purchase, so they were easy advertising for more of the product line.  However, this was fairly common for toys in the 1980's.  Masters of the Universe, G. I. Joe, and Transformers all had similar premises.  MotU had both mini-comics and a cartoon series while the other two examples had cartoons and licensed comic book adaptations, although the latter were less of an advertising shill than a marketing strategy.

With writing and artist credits unknown it is difficult to really review compared to other works by the same creators.  However, as I said before, the stories are wonderful.  They are the kind of fun that one might see featured in a Saturday morning cartoon like Super Friends.  In fact, later seasons of Super Friends were marketed in conjunction with the Super Powers line. 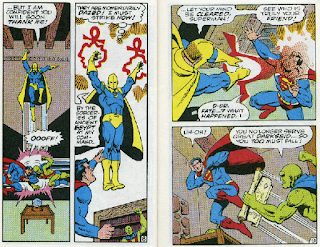 As for the art, there are obvious JLGL influences, as most of the characters are modeled after his style guides that were done for DC around the same time.  In other words, most everything is a pretty decent copy of DC house style.  Some characters were redesigned either relatively recently to  the release of the Super Powers line (Brainiac, Lex Luthor) or specifically for the line (New Gods characters).  Mantis, as he figured prominently into two of these stories, got the most drastic redesign, switching from a humanoid appearance to a purely robotic one.  This is the version of Mantis I was first introduced to  as a kid and it influenced my understanding of the character.  He only appeared this way in Super Powers-related stories and in Who's Who.  I have always wished he stayed this way in the main continuity.

A few nitpicks here and there, but nothing major.  A few times the writers took a little bit of liberty with some of the characters' powers or the artists didn't draw things quite the same as they appeared in the mainstream comics.  This really can't be too harshly examined, though.  First, I must reiterate that these were intended to help stimulate play, so really imagination was the only limitation.  Second, if the artists were not associated with DC then they probably did not have all the reference materials handy to be able to reference every detail.  Besides all that, in a 12 or 13 page story with generally 2-3 panels per page it's hard to be able to get everything in anyway, so smaller details were probably not very important to the staff at hand. 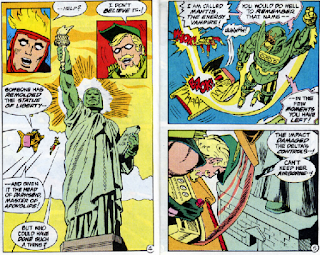 Overall, I must say that these are absolute gems!  For whatever reason, these comics have never been collected and released as a trade.  With Dark Horse having released a collection of the Masters of the Universe mini-comics I would like to believe there is hope for DC to somehow work out a deal with Kenner to be able to collect all the Super Powers related comics into a larger trade, but unfortunately it doesn't seem to be in DC's plans at the moment. These comics go for a fairly hefty price online ($10 minimum by my quick search), but to a staunch collector that might be a drop in the bucket in order to get those few missing stories.  However, if you ever come across them somewhere for cheap, I HIGHLY suggest snatching them up.  They are all incredibly fun stories and an amazing time capsule for this family friendly era of superhero comics.
Posted by Clinton Robson at 2:10 AM