SYNOPSIS: "Batman comes to New York City in his search for an arsenal of high-tech weapons and robots that use decapitated human heads as their brains. Antagonistic, confrontational and suspicious of each other, Spawn and Batman engage in violent battles before realizing they are both after the same villain. Grudgingly, they decide to work together. The person they seek has been kidnapping and decapitating the homeless for use in the robots, but that’s only part of the plan: There is also a nuclear arsenal ready to be deployed."
--Wikipedia

NOTE:  The Batman presented here is considered part of Miller's overall Batman continuity which includes Batman: Year One, All-Star Batman and Robin the Boy Wonder,  and the Dark Knight Returns series of books.

First off, the only time I like Frank Miller writing Batman is in the Year One storyline.  Dark Knight Returns, All-Star Batman and Robin...this, I have to dislike.  I can't accept Miller's overall Batman design as this single-minded, soulless, punishment machine.  It feels like Miller understands Batman mission, but not his motivations.  This Batman is just the non-lethal version of Marvel's Punisher with more resources and a need to hide his identity.  Meanwhile, McFarlane's Spawn (who was no stranger to other writer's interpretations in his less than two year history at this point) is presented as much more jovial.  Let me say that again.  Spawn, the undead Al Simmons who has returned from Hell and has a face that looks like somebody put rotten fruit in an ashtray, comes across as much more friendly and less annoying than the human guy whose parents were murdered over a decade earlier and has taken a vow to fight crime so it never happens to another family.  Please, reread that last sentence as many times as needed to let it all sink in before we move along.  Trust me, this will wait. 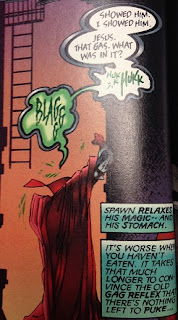 Pictured: Possible reaction after reading this book and/or review.

All mentally prepared for what lies ahead?  OK.
Now we come to the actual plot.  In the overall scheme of things, this is actually about what you would expect from the merging of a plot from Batman and Spawn.  Although, since this is the more Image influenced of the two crossovers (yes, there is another one and I hear it is equally bad), there is a little bit more emphasis on the graphic aspects of the story.  Having heads cut off wasn't exactly forbidden at DC in the early 90s, it just wasn't the best idea to be showing those heads sans body all over the place.  But, being early 90s Image, of course we see them plenty. 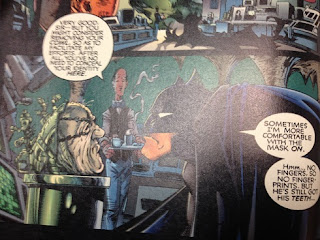 Robots abound in this tale, but again I have to remind everybody that this is early 90s Image, specifically Spawn.  Spawn was known to battle several cybernetic villains back in the day.  Really, this is just Batman hanging around in Spawn's world for a couple days.  The book is really just several altercations between Batman and Spawn until they eventually figure out they are both after the same bad guy, have a ceasefire to team up and then try to part ways.  Spawn even offers a possible team up again so they can "bury the hatchet."  Batman responds with the only thing people really remember from this book--a batarang lodged in Spawn's rotting face.

Still with me? It's time to look at the art.  Deep breath....aaaaaaaand go!
McFarlane is 100% in McFarlane mode in this book.  Capes, capes and ludicrous amounts of capes!  And you thought 70s and 80s Batman had a long cape. HA!  McFarlane's Batman has capes for miles! 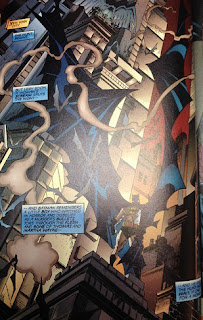 Honestly, I'm being a little harsh on McFarlane.  His city looks amazing. He has a take on Alfred that is definitely unique. I'm not saying it's great, but it's different enough to be appealing.  A lot of the time many characters are drawn as shadowy figures, regardless of whether they need to be in shadow.  It could be taken as an artistic slant on the issue, but a lot of them time it feels like laziness and a need to get the issue rushed to stands. Also, there are instances where Spawn has his mask on in one panel, off the next and back on again in the third.  A little bit of editorial gaffing perhaps? So there is some give and take in here.  Muscled figures are here with flowing capes, but at the same time there are distorted and mostly-undrawn figures who fight for the sake of hitting things.  It's a mixed bag. The colors, however, are hard to complain about.  They don't necessarily pop off the page, nor should they.  Most of the story takes place in dark locations like caves and alleyways.  Batman and Spawn have colors that blend into these environs somewhat and Oliff does this while still giving them prominence in the scenes.  If anything if the true hero of this story, it's the colors. 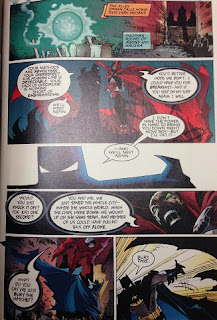 Overall, I have to admit, I have read this twice.  That is at least once more than any person probably should.  However, if you are the opposite of me and Miller's Batman is your favorite, this needs to be in your collection.  If you are a Spawn completist, you probably already have this.  If you are a casual fan of either or just comics in general, it might be best to avoid this unless you find it in a very cheap bin or given to you for free.  I'm not saying it's a terrible thing, but it's probably not worth putting out real effort to track down and buy. 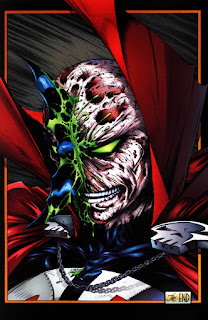 Posted by Clinton Robson at 2:24 AM