SYNOPSIS:  Cobra has been smuggling large crates of unknown items using shipping planes.  A misplaced crate leads to a member of a work crew discovering that it contains a robotic replica of the President of the United States. After alerting the G.I. Joe team, the Joes decide to put a plan into action.  A homing beacon allows them to determine that there are two main facilities for this operation--a remote island and the Cobra Embassy in New York.  A tactical strike against the island is planned while Snake-Eyes, Scarlet and Storm Shadow will infiltrate the embassy and place a homing signal so that Wild Bill can launch a smartbomb to blow it sky high.  While inside the embassy the three encounter a robot duplicate of Snake-Eyes.  After making their way through the battle, the three manage to turn the odds against Cobra Commander, forcing him to flee the embassy before it and the remote island are both destroyed. 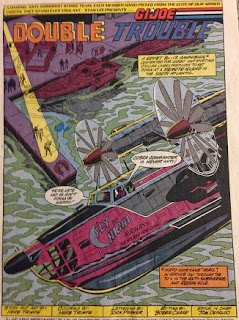 MY THOUGHTS:  This is a filler issue.  It's a one-and-done made to fit in between storylines.  Larry Hama had just finished up the "Desto:  Search and Destroy" story and was just about to take the first big steps into G.I. Joe slowly becoming a ninja-focused book.  Nothing wrong with with having a filler story like this once in a while, right?  Well, the theory is sound but this story is lacking. 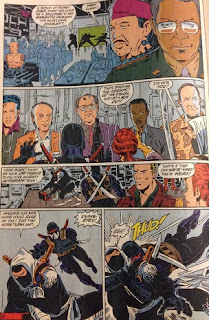 The plot of the story itself is great.  It's actually a wonderful G.I. Joe story. The robot duplicates, the three-member stroke force, Cobra Commander turning tail when his plans are foiled--all perfect aspects of the Joe book.  The problem comes in how Trimpe wrote it!  Trimpe seems way too focused on being able to drop in random military trivia and Joe-esque acronyms than telling the actual story.

It doesn't end there, either.  Trimpe fails to get Storm Shadow's "voice" as a character right.  Storm Shadow seems to waver between the honorable Arashikage ninja and an extra in the movie Surf Ninjas.  And speaking of voice, who in the world left Snake-Eyes have a speaking moment?!  This is both the fault of Trimpe and his editor, but really, by this point I am beginning to think Trimpe only had the barest of familiarity with these characters.  He probably really wanted Duke, Scarlet and Quick Kick (or some similar line-up) but since Quick Kick was dead and Duke isn't nearly as popular as Snake-Eyes I'm betting he got overruled.

Trimpe's art is pretty spot on.  The politicians and celebrities, for the most part, are easy to determine who they are.  George Bush, Ronald Reagan, Don King and Elvis Presley are all included in Cobra's duplicates.  Keep in mind this issue was released in 1991.  Most of this was fairly pop culture worthy.  Also, being 1991 we hadn't quite hit the EXTREME art period (but it's coming!).  Even with that, we see tons of pouched on Snake-Eyes's vest and Storm Shadow carries plenty of weapons/accessories that he never uses.  However, my main complaint in the art is that this issue shows Snake-Eyes without his mask multiple times.  This became more common toward the end of the series but at this point it was a rarity.  So why am I complaining? No scars!  Snake-Eyes is a mute who injured himself in a wreck saving Scarlet and his face got badly injured.  But in this issue he might as well be some hunky Hollywood type.  Not exactly the right way to handle the character. 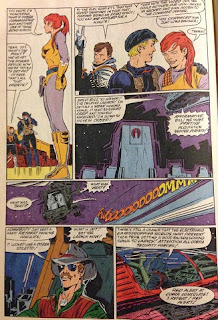 Overall this isn't exactly a terrible issue.  The general plot and art hold it together as a fair Joe story, even though the robot duplicates are never revisited again.  A casual fan might not even really notice the things I have nitpicked.  Regular G.I. Joe readers, however, will easily spot the errors contained within these pages.  As a time capsule piece for what Joe stories were like in the early 90s it's not a bad example.  Really, though, we all want and need Larry Hama over Herb Trimpe any day.  There are worse issues that came later ("Firefly is the Faceless Master" anyone?) but this one always stands out to me as one that had such potential and then fell short in the final product. 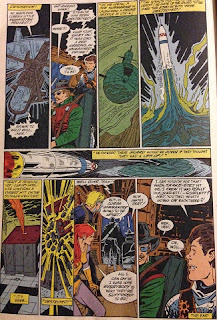 Posted by Clinton Robson at 2:05 AM