SYNOPSIS:  At the Coliseum in Rome, Superman and Firestorm encounter what appears to be an ancient gladiator. 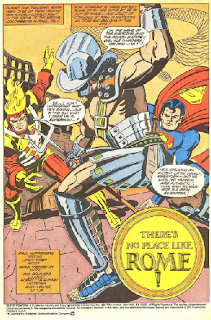 The trio square off, with the gladiator thrusting his forked spear at Superman.  The weapon shatters to pieces upon contact with the Man of Steel, but the gladiator is not so easily discouraged.  Realizing the fight has not yet left their opponent, Firestorm tries to convince Superman to let him make quick work of the gladiator.  Superman, being the voice of reason and experience, tells Firestorm that since the gladiator is obviously a relative innocent from a bygone era, they should handle things as non-violently as possible.  The two heroes scoop him up in a net and toss him to the waiting Italian authorities.

Moments later, Superman and Firestorm meet with a local professor to discuss the mysterious pod that was discovered in the area.  The pod is similar to others seen across the globe, all being investigated by various other heroes.  Superman's X-Ray vision can't penetrate the pod's exterior, but it appears the pod is growing roots that are digging into the Earth.  Just then, the two heroes hear gunshots.  Racing to the scene of the action they discover what the problem is--Steppenwolf, uncle of Darkseid.  Before they can react, Steppenwolf blasts them with energy from his Electro-Axe! 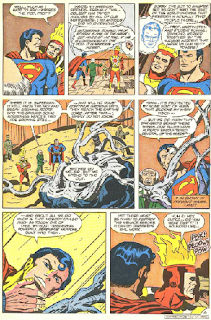 Elsewhere, Desaad cackles with glee over the events unfolding on his monitor screen.  He announces aloud that such events will be helpful to him. Darkseid overhears this proclamation and repremands Desaad while destroying the monitor with his omega beams. We learn that the pods are present to help cultivate Earth into a new home for Darkseid and his followers following a
recent revolt.  Darkseid reminds Desaad that his wrath is not to be tempted and then activates a Boomtube/stargate in order to travel to Earth, leaving Desaad to plot and scheme as per usual. 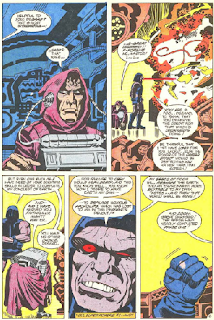 Back in Rome Steppenwolf's assault continues.  He lets slip that Darkseid requires conflict between the New Gods and the heroes, otherwise he would have finished them off to begin with.  The violence and conflict power the pods and increase their planetary transformation process.  Superman declares that they won't actively engage Steppenwolf, so instead Steppenwolf turns his attentions to the Italian authorities.  This enrages Firestorm, who is more than willing to give Steppenwolf a fight.  Superman stops him, however.  Steppenwolf escapes into a stargate, but instead of immediately following, Superman tracks him with supervision and realizes that Steppenwolf has escaped back to ancient Rome.  Superman gathers Firestorm and the gladiator and flies fast enough to travel back in time! 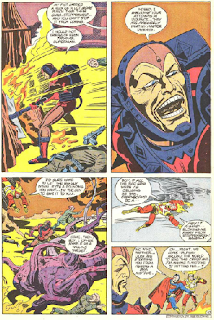 Appearing in the past, Superman and Firestorm return the gladiator to the Coliseum.  As they leave to search for Steppenwolf, the uncle of Darkseid springs his trap! Kryptonite shackles (which only drain his powers, not kill him) are thrown onto Superman's wrists while a collar that inhibits superpowers is placed around Firestorm's neck.  Steppenwolf gloats as he kicks Firestorm in the head. 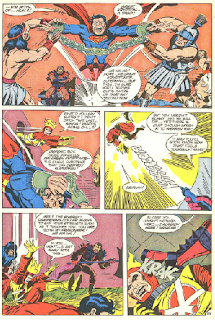 Back in the present, Batman, Flash and Robin are investigating another pod.  Flash attempts to get a closer look but touching the giant seed activates a glowing portal which sucks the scarlet speedster inside, leaving Batman and Robin to kick the Batplane into high gear to reach Flash's last known coordinates. 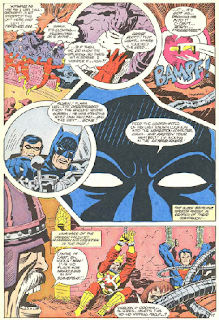 Back in Ancient Rome, Superman and Firestorm are made ready to be part of the days entertainment at the Coliseum while Steppenwolf and Emperor Nero watch from on high.  Lions are released to fight with the two heroes.  Nearly powerless, Superman still refuses to use his weapon to inflict mortal injury on any life.  Instead he hopes his invulnerable costume will protect him enough to keep them distracted while Firestorm goes to Steppenwolf. 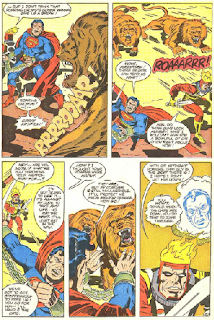 Steppenwolf nearly gets the drop on Firestorm again, but Professor Stein suggests that he and Ronnie separate.  Doing so allows Ronnie to remove the collar and Stein to take a swing at a distracted Steppenwolf. 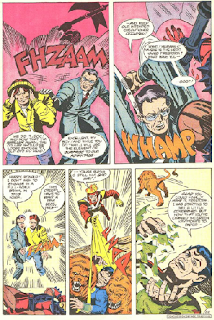 The two merge into Firestorm again in time to zap the lions attacking Superman and remove the kryptonite shackles.  Superman rushes toward Steppenwolf, who has already opened a gateway back to the present.  Superman and Firestorm fly back through time like they did before. In the present they see the seed has died, starved of their violence since Superman went under his own power instead of traveling with the aid of the seed.  The two heroes decide to postpone the hunt for Steppenwolf and instead opt to try and bring this new information to their allies' attention. 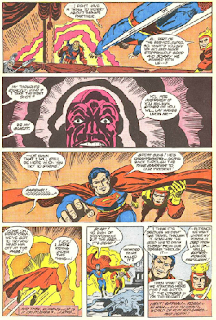 MY THOUGHTS:  These stories are amazing.  So much packed into a single issue, it's just incredible.  You never realize how much is there until you try to write it all down.  I've talked about all kinds of bronze age stories that pack tons of story into a book before.  This is obviously one of them.

Super Powers was three different unconnected mini-series that DC did as tie-ins to the Super Powers toy line (and to a lesser extent the later seasons of SuperFriends cartoons).  The second series focused on a story involving Darkseid attempting to turn Earth into a new Apokalips.  Pretty clever way to be able to get all the heroes to team up and work against the villains.

The story itself is pretty decent, especially for a toy tie-in.  If anybody wants to argue about the characters' powers and such, just remember this is 1.) pre-Crisis versions and 2.) non-canonical.  It's meant to be a fun and entertaining story that is a much more expanded version of the mini-comics that came with the toys.  It demonstrates play scenarios in a dramatic comic book fashion. Kupperberg definitely knew what he was doing with this story.

Kirby's art is pretty awesome here.  Even in the 80's, Kirby was doing great art.  Steppenwolf's look from the Super Powers line, like Mantis, is always my preferred version of him.  Even though this isn't his classic design, Kirby still manages to drawn the character in a way that feels classic but also modern.  In fact, it was a little extra wonderful to see Kirby returning to his Fourth World characters again.  Such a fanboy moment.

If there is a drawback, it's seeing Superman and Firestorm with square heads at times.  They reminded me of old drawings of Ben Grimm before he became the Thing.  Also, there are times when it feels like the inking job distorts Kirby's pencils...like the characters are too heavy or something.  But it's a minor annoyance that can be looked past.

Really, if you are into classic Superman or DC this is a story to not be missed.  Trust me, it's too much fun.

Posted by Clinton Robson at 5:45 AM