SYNOPSIS:  Coming at you live from WGBS Channel 8 is a special news report from Clark Kent and Lana Lang.  It seems that a passenger plane heading to Metropolis from Cairo was attacked by a mysterious flying figure.  This being, dubbed the Exploder, caused a noiseless explosion on the plane.  Superman managed to save the day, though, without any injuries to the passengers on the plane.  The Exploder, however, escaped. 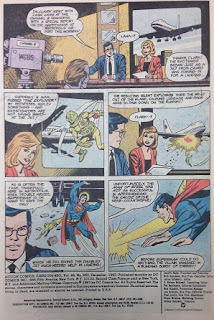 After being handed a breaking story about a powerful underwater eruption in New Guinea, Clark excuses himself during the commercial break.  Lana notices mid-sentence that Clark has vanished.  He has taken the chance to change into Superman and race to the scene.  It seems this powerful eruption has actually detached New Guinea from its connection to the tectonic plates it is normally attached to and has set it adrift! 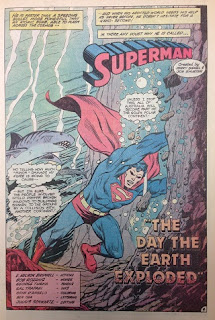 Superman uses his superstrength to keep New Guinea from colliding with Australia. His supervision detects no radiation in the area, so no known bombs of that magnitude could have caused such an event.  He ponders the possibilities as he flies back to Metropolis, arriving just in time to come back from commercial with WGBS exclusive updates on the New Guinea crisis.

The next morning, Lana, Clark and Jimmy Olsen meet up with Lana's father (who just so happened to be on the plane the Exploder attacked) as he gives them an exclusive sneak peek at a mysterious artifact he found in Egypt.  Jimmy mentions that his dad had found something similar and given it to him to have Superman look at, but Lana's dad quickly dismisses Jimmy's claims.  At that moment a blinding light appears and the Exploder arrives to snatch up the mysterious artifact.  Clark takes the opportunity while everyone else is momentarily blinded to change into Superman and give pursuit. 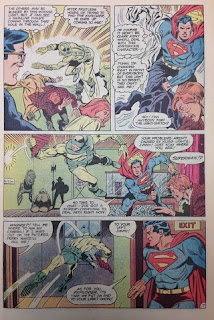 Superman chases the Exploder over the skies of Metropolis and nearly catches him before the Exploder simply vanishes.  Superman decides to quickly return to the others before Clark is noticed missing.  Jimmy says he has a hunch he needs to follow up on.

Later on, Superman investigates a mysterious golden orb that has been spotted orbiting Earth.  Lana and Clark had mentioned that nobody knows who launched this mystery satellite.  Superman's investigation proves that it is hollow and looks more like a small planetoid than a satellite, almost as if it were a globe of some kind.  However, there is no time for speculations as a bright flash of light from Asia catches Superman's attention.

Streaking toward Asia, Superman manages to catch a bomb before it can do too much damage.  Flying off with it, the bomb explodes with enough force to even make Superman feel the impact.  But no time to rest as Jimmy has activated his signal watch back in Metropolis.  The Exploder has arrived and is stealing the artifact Jimmy mentioned earlier. The artifact appears similar to the one seen earlier.  As Superman makes a grab for the Exploder, the Exploder tosses a small explosive at the Kryptonian.  Superman clasps his hands tightly around it as the explosive still blasts with enough force to cause damage to Jimmy's apartment. 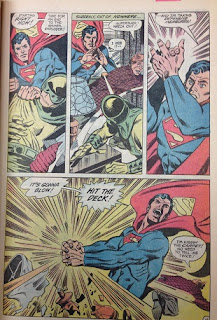 The good news is that the artifact is still safe.  Superman takes the artifact with him in hopes of settling this Exploder business once and for all.

Back at WGBS Connie Hatch wants to double check with Clark that she is still on the schedule for the news that night.  Connie is the puzzle editor for the Daily Planet and she has found some new shape puzzles to show the viewing audience. One is a small sphere that when arranged properly displays Superman's S symbol.  This gives Clark the clue he needs.

As he changes into Superman, Clark puts it all together.  The explosions have been meant to rearrange the continents back into the giant landmass known as Pangaea.  It would more or less match what was pictured on the globe in space he examined earlier.  All that remains now is finding the Exploder and those helping him. Superman quickly finds them in space and they in turn notice him.  They transport him aboard their vessel where they casually explain their story to Superman. 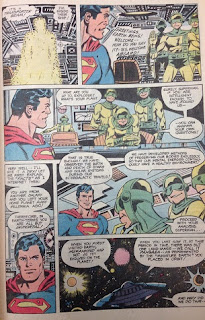 These aliens come from a nearly immortal race that has explored the universe for centuries and gained countless amounts of knowledge.  However, near immortality comes with great boredom.  Therefore, a cosmic scavenger hunt of sorts had been established many centuries earlier.  Pieces of a larger item had been hidden on various worlds all across the universe where each piece would lead to the next.  However, the last time this particular race visited Earth, Pangaea was still the configuration of the land, so they felt they needed to return it to such a state in order to find the pieces.  They meant no real harm.

Superman explains that their actions were very harmful.  The aliens argue that Earth isn't overly important and that they can be patient to wait until humanity goes extinct if need be.  Superman says that he will use his powers to help them now that he knows what they are after and why. 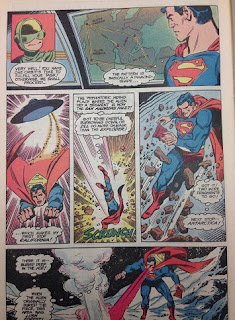 The assembled disk directs the aliens to the fifth planet of the solar system.  Superman informs them that area is just asteroids and other planetary debris now.  The clue is worthless.  But the aliens say that the treasure itself is indestructible, so the search continues elsewhere.  They transport Superman off their ship and fly away shortly before destroying the golden globe from before.

That evening, Clark and Lana deliver the nightly news.  Like clockwork, Clark vanishes during the commercial break with Lana saying that somehow Clark will be back in just a couple minutes with a new late-breaking exclusive...somehow. 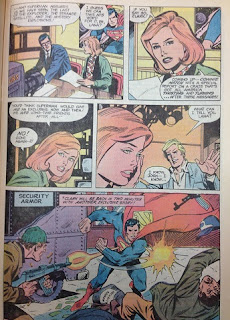 MY THOUGHTS:  This is the kind of story that is a perfect example of the time in which it was written.  I don't mean that to necessarily say that it feels dated.  It's more like the Superman I first encountered as a child in the form of the Super Friends cartoon.  Something exceedingly larger than life, powers that were beyond belief and adventures that always seemed to be able the fate of all existence.  Far over the top, but gosh darn it it's still fun!

There is a lot of story in these pages.  Something like this, were it to be written today, would take up three issues.  When you consider that this story is a one and done issue, it becomes an even bigger rarity in the modern era.

The action scenes may not be expanded over the course of three pages, but they are there and the reader is given more than enough information in the combination of words and pictures to be able to easily play out the scene in his or her mind.  These kinds of Superman stories are not so much second by second depictions as they are something akin to a storyboard for a movie--a guide by which one can get the overall scene in one's head, but the rest of the actions can play out in a logical fashion to get from beat to beat.

I really enjoyed this story far more than I expected.  Honestly, I was afraid of a cornball story of epic silliness.  However, what I got was an over the top sci-fi adventure starring Superman that was treated with some measure of seriousness (at least as serious as some of these comics get).

You can tell this is really the Super Friends era Superman.  He seems to really enjoy being Superman and balances his time as Clark Kent rather nicely.

The art is really good.  I love the way Superman is drawn and you can easily tell when he is supposed to straining, conveying emotion, etc.  The Exploded and his race are of particular interest.  I see their uniforms as sort of a Kirby-light approach to design.  I could easily see them as some small offshoot of Kirby's Fourth World stuff if given just a few small tweeks in details.  The fact that they all look alike is nothing new for alien foes in the DCU.  It's fairly standard sci-fi fare.

If I have to complain about anything it's the fact that the artifacts look less like ancient finds but instead leftover pork chops.  Just a small annoyance, but one that is painfully clear to me.

Overall I loved 99.9% of this issue.  It was a great read and an equally fun reread.  Is it full of tropes and hackneyed ideas? Of course, but that's part of comics stories, especially superhero ones.  It's all in the approach and delivery.  And believe me, when this story approaches it definitely delivers.
Posted by Clinton Robson at 12:30 AM