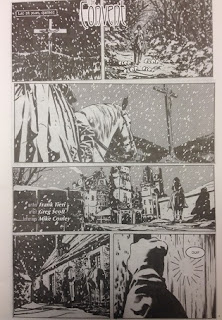 SUMMARY:  Outside Lac St. Jean in Quebec, a lone cloaked figure ride horseback through the heavy winter snows.  Approaching the church, the rider dismounts and knocks on the door.  Father Levesque answers, not expecting visitors at this hour nor in this weather.  He invites the the rider, who we see to be a woman, inside, expressing that he didn't expect the church (meaning church authorities) would send anyone in such weather. 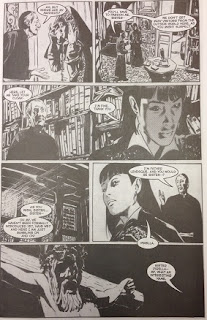 Remembering his manners, the good Father asks to take her cloak, which she declines, and makes introductions, to which she replies that her name is "Pirella."  As he attempts to make small talk, Pirella inquires to the location of the nuns.  Apparently she is all business.  The sisters are in the middle of nightly prayers, all gathered in the sanctuary of the church.

Father Levesque introduces Pirella to Mother Dominique, saying that Pirella is a representative of the church there to check up on things.  Pirella wastes no time in tossing her cloak open, drawing a sword, and severing Mother Dominique's head from her neck.  As the head flies through the air, Levesque stands agast and stumbling over his words to get an explanation. 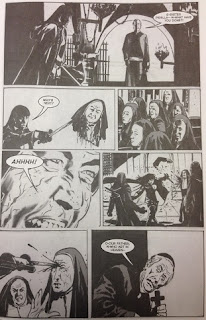 Pirella lifts up the head and waves it about to the congregation.  The nuns snarl and attack en masse, but Pirella is not fazed.  She strikes at them with sword and dagger.  Father Levesque begins to recite "Our Father" as Pirella continues her assault, culminating in her setting fire to the assemblage of nuns who ignite and burn as quick as kindling.

Before Levesque can finish his prayers Pirella approaches.  She again lifts the severed head and pulls back the lips, exposing a set of fangs.  Levesque realizes exactly what sort of peril he had been in and another realization sets in. "The church didn't send you, did they?" he asks.  "I never said they did," is the reply. 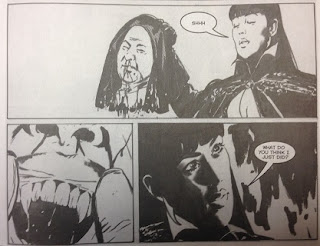 As she gathers herself up to leave, Vampirella gives Father Levesque a small bit of advice. If he should ever again find himself living someplace as remote as Lac St. Jean, he'd best make sure it's not infested with vampires. 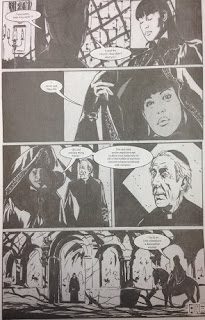 MY THOUGHTS:  First off, I gotta say this was a pretty fun little story.  It's just a few short pages and only one small part of the magazine, but it served its purpose very well.

Let's be honest.  Vampirella is primarily known for being a cheesecake pin-up style character.  She's usually presented as a relatively sexy lady with ample curves in all the right places and very skimpy clothing used to cover up the overly naughty (i.e. non-Code friendly) bits.
For example: 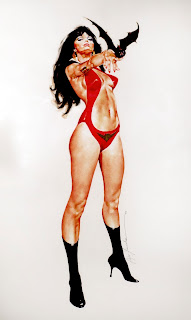 But in this story, we barely see anything other than her cloak.  When she draws it back, her frame still mostly in shadow.  While is may be a disappointment to many readers, I found this to be an interesting approach.  This was not a story that relied upon or ever needed Vampirella's sex-appeal nature to come into play.  She was there to exterminate a nest of vampires and nothing more.  In fact, a small bit of subterfuge helped, so coming to the church while dressed as sultrily as possible probably would not have accomplished this task.

The story itself is fairly cliche, but it works well.  Hunting down and killing off vampires is a typical story and almost always works the same way.  Setting the nest in a church is fairly unique.

A lot of world building is established in the few pages of story we have.  The time period is not specified, but it is clearly before automobiles, electricity and gas lights, so it could be as recent as early-1900's or more likely it is quite a bit earlier, given Vampirella's use of cloak, sword, etc.  The vampires are not necessarily the "traditional" vampire as the nuns are seen in the sanctuary clearly standing in front of a giant crucifix without being affected.  Any new readers to Vampirella's world can learn a lot here.

Overall, this is definitely a fun little horror adventure.  The scares aren't necessarily there, but sometimes it is more fun to just see somebody let loose and slay some vampires.  If you put yourself in Father Levesque's position, it gets pretty intense, but mostly this is just a fun short story to distract yourself for a few minutes with some vampire slayer action.

Posted by Clinton Robson at 8:49 AM