SUMMARY:  Perry White sits in a hospital room visiting Dr. Kitty Faulkner, who has been in the hospital attempting to return to normal ever since her experience being the menace known as Rampage.  Perry and Dr. Faulkner recount those events and we learn that Dr. Faulkner's finances are quickly running out.  Perry promises to figure out something that he and the Daily Planet can do to help. 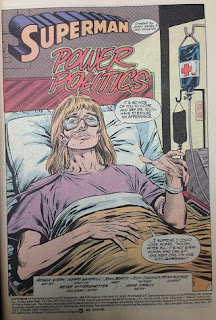 As Perry leaves, a mysterious figure sneaks around in the shadows, making his way into Dr. Faulkner's room.  It turns out that this is Tom, one of the people responsible for Kitty's initial accident.  His presence enrages her, but he swears that he has figured out a way to restore her energy without triggering the Rampage transformation.  She yells at him to leave, but Tom still manages to sneak a note to Kitty reminding her that if she changes he mind he is available. 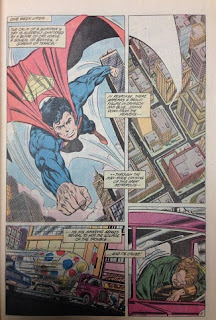 The following week, Superman flies over the city of Metropolis.  Below him, a strangely decorated cement truck is speeding out of control.  A quick scan shows the Man of Steel that the driver has passed out at the wheel.  Superman zooms down and dig his feet into the street to help slow the vehicle to eventually halt mere feet from crashing into a gas station.  Superman pulls the driver out and quickly applies super speed CPR to help bring the man back around.  Paramedics soon arrive, but before Superman can leave the scene another person of note also happens by--Senator Forrest, who has been campaigning for the Presidency.  Forrest manages to shake Superman's hand for a quick photo-op before Superman can even think.  Kal-El quickly departs once he realizes what is happening and he thinks on how much he wants to stay out of political affairs, especially when connected to crooked people like Forrest.

Later on, Clark learns from Perry that even though he has managed to raise some money for Dr. Faulkner, she has checked out of the hospital.  Clark, as Superman, goes on the hunt for Dr. Faulkner, noting that she has apparently moved out of her apartment as well.

Elsewhere, Tom has been applying his treatments to Kitty and they seem to be working.  She is feeling better than she has in months.  However, this time around Tom intentionally feeds too much energy into the harness, forcing Dr. Faulkner to absorb it and transform into Rampage.  As Rampage attempts to take out her fury on Tom he sprays her with knockout gas, rendering her inert. 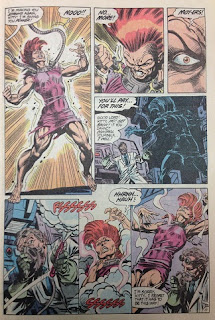 Days go by and many places and things connected to Senator Forrest have been demolished and covered in graffiti that calls out many dirty deeds that Forrest has been connected to.  Forrest himself is furious. Lex Luthor assures him that this isn't Superman's way, so obviously somebody else is behind it all. 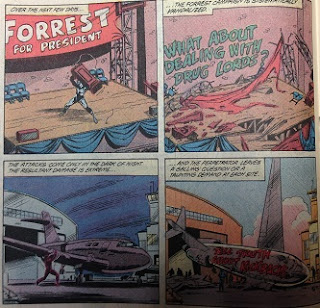 We find out that, obviously, it is Tom sending Rampage to do these things.  Tom is getting revenge against Forrest for being his co-conspirator in the initial Rampage incident.  The following night, Clark Kent and Cat Grant are covering Senator Forrest's speech when suddenly a limo smashes through the wall.  It is covered in similar graffiti to the other incidents.  Clark dashes away to become Superman.  Outside, Superman finds more smashed limos and Rampage herself.  He attempts to draw off her energy as he did in their previous encounter, but this time her collar has failsafes installed to prevent just such a measure.  If anything, she has actually absorbed some of his energy! 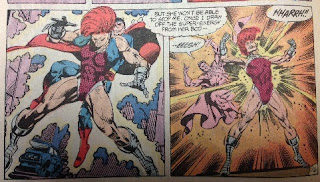 The two crash through the streets into the subway system.  Superman tries to reason with her, to get Kitty to regain control.  In her confusion, Rampage accidentally grabs hold of the electrified rail.  She absorbs more and more energy and Superman dashes ahead, shoving her away from it before she explodes from the energy overload.

Back in his lab, tom begins to wonder about Rampage. No contact or vitals detected for nearly ten minutes. That can only mean she is dead...or has regained control.  Just then, Superman and Rampage appear and easily convince Tom to come forward with any and all evidence he might have against Forrest and to return Kitty to her normal state...OR ELSE, as Rampage puts it. 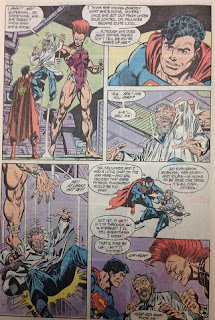 One week later, Forrest has been outted and loses big in presidential race.  Meanwhile, Kitty has gotten a job with S.T.A.R. Labs and also has a small portable energy unit to help keep her regulated.  She waves goodbye to Clark and Perry as the two marvel at how tough a lady she really is. 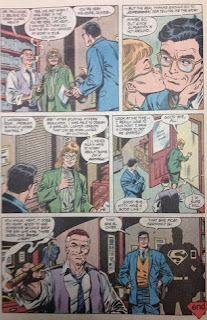 MY THOUGHTS:  Well, honestly, this is more fun that I make it sound.  It's another lovely one-and-done, and we all know how much I love those.

This was my initial encounter with Rampage, not having read the first appearance.  She comes across as a bit of a She-Hulk knock-off, but she still works.  She is larger than Superman, so she's naturally an imposing figure.  However, given her powers she is a bit like the Parasite, too.  She has the potential to draw off Superman's strength and become a major contender.

I am appreciative of this story because Stern takes the high road.  What could have been nothing but a 22 page slugfest is actually a thought out story involving politics and revenge--very little fighting all things considered.  What fighting there is between Superman and Rampage is handled smoothly and quickly.  This could have easily gotten the extensive two-issue treatment, but it just wasn't needed to accomplish the story that Stern wanted to tell.

This late-80's Superman art is something that I personally enjoy.  It's coming off the Byrne run so his style is still present, but we are moving it away from Byrne and more toward a DC house style, it seems.  Within a couple years the Superman titles will start becoming increasingly interlocked so that consistency in art will be important.  I love when we transition into that early 90's "Panic in the Sky" era for the art, but this is pretty good too.  Really Rampage steals the scenes away from Superman as far as the art goes, but maybe that's just because we're so used to him but seeing her there with her mohawk, metallic gloves, orange skin and imposing height draws our eyes away from Clark just a little.

Overall this is by far a heck of a fun little romp.  No real game changer here, but not all stories need to be.  In fact, a lot of times it's the fun diversions like this one that keep the readers happy and ready for more.

Posted by Clinton Robson at 7:27 PM