SYNOPSIS: On a hilltop near the town of Christ's Crown, a midnight blood sacrifice is held by a demonic cult.  Their goal is simple--summon the son of Mephisto, Blackheart.  Blackheart indeed appears, but he is not satisfied with such a small sacrifice and takes the cultist's lives as forfeit.  Then, lamenting that Mephisto has taken some of his power and prestige, Blackheart swears that he will corrupt those who have escaped Mephisto's influence. 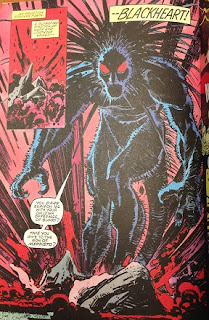 A few days later, Daniel Ketch rides his bike into Christ's Crown. He takes up residence at a boarding house run by Flo Crumm and her young daughter Lucy.  Dan's not the only guest, as they are all joined that night at dinner by Mr. Frank and Mr. Logan.  Lucy takes a shine to all three guests, but especially Daniel, saying she knows they are all nice people. 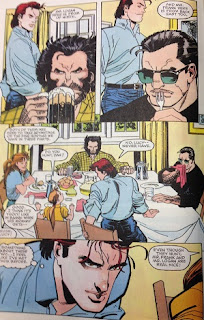 After dinner, the men all retire to their rooms.  Dan Ketch ponders who sent him a mysterious letter talking about his life as Ghost Rider.  Mr. Logan pays a call on Mr. Frank.  Wolverine recognized the Punisher a mile away, even with the phony mustache. They, too, have gotten mysterious letters promising them information they might desire. Logan returns to his room and Frank Castle suits up.  Logan gets into his costume as well. 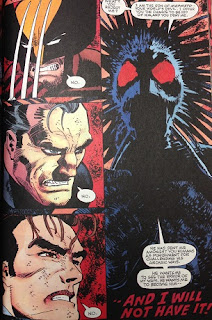 The three men each are paid a simultaneous visit by Blackheart.  He taunts the heroes, and none are able to harm him in any way.  He offers them all a chance to join him which all three flatly refuse. Blackheart says that he will just have to convince them in a different manner and vanishes.  Seconds later they hear Lucy scream from downstairs.  Flo is walking away in a trance as Lucy pleads through her tears for her mother to not go with the bad man.  However, Flo and likewise the rest of the adults in the town are in Blackheart's sway.  He has summoned them all to the center of town. 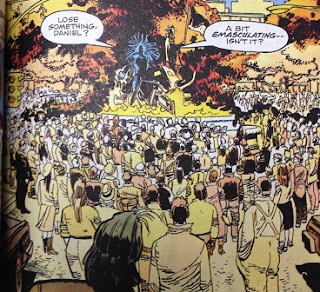 Logan promises Lucy that they will get her mom back and she should just wait inside.  Wolverine and the Punisher rush off to confront Blackheart while Daniel ducks around back to get his motorcycle, but it is missing.  It turns out Blackheart has taken it and activated the transformation between normal motorcycle and the conveyance of Ghost Rider.  Dan has never transformed without the bike, so he is left powerless while Blackheart taunts the heroes and tests them to see if they will harm or even kill the townspeople to get to him. To further sway their methods, Blackheart reveals that he has somehow stolen Lucy away and is holding her captive.

The Punisher takes the opportunity to open fire, landing many hit directly on Blackheart's head.  The guns seem ineffective.  Blackheart rides away on Ghost Rider's bike with Lucy in tow, calling to the heroes to follow him.  Lucy's arm has gotten cut in the commotion and some of her blood falls on Dan's face.  Wolverine and Frank hop in Frank's van to give chase.

Meanwhile, Daniel stumbles across a local motorcycle shop.  He smashes the window and procures a motorcycle.  It is then he notices Lucy's blood on his face.  As he wipes it away, he ponders if Blackheart has been right in his message that the transformation comes from within. The blood of innocent Lucy has caused something to stir within Daniel. The Spirit of Vengeance has been activated and Daniel becomes Ghost Rider once more! 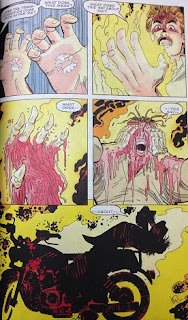 Logan and Frank arrive at a wall of thorns that Blackheart has used to block their path.  The two do their best to hack through the mess but get plenty cut up in the process.  However, Ghost Rider comes tearing through on his new motorcycle, blazing a path for the heroes to reach the hilltop where Blacheart is waiting.  He confronts the heroes with their worst fears and greatest desires.  Wolverine must fight with the possibility of never remembering his past. The Punisher must deal with his family's death or the possibility that they can be returned to him.  Ghost Rider is teased with knowing whether or not he is indeed the demon Zarathos.  However, once again the heroes prove themselves worthy of the title by rejecting Blackheart's tainted offerings.  Logan and Frank have come to terms with who they are and Ghost Rider only seeks that vengeance be enacted upon the guilty. 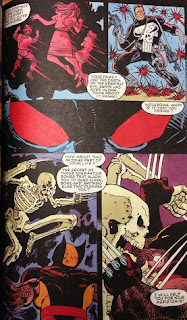 Ghost Rider saves Lucy from being dragged into Hell.  The Spirit of Vengeance has had enough. He removes his gloves and begins to pummel Blackheart with the pain that is pure hellfire.  This weakens Blackheart. Wolverine gets a few good hits in, managing to slice off Blackheart's right arm.  Finally, the Punisher unleashes a volley of gunfire culminating in explosive rounds that shatter Blackheart's body to pieces. 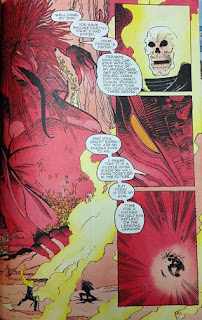 Mephisto appears suddenly.  However, he is not there to battle the heroes but instead has come to collect his son. He does promise that there will be another encounter, but not this day and the grand devil vanishes.  Throughout Chist's Crown the people begin to return to normal and Lucy is shown to be no worse for wear.  They ponder if it was all real and if so was it all worth it.  Ghost Rider comments, as Lucy holds tight to his hand, that so long as the innocent are protected then it is indeed worth it. 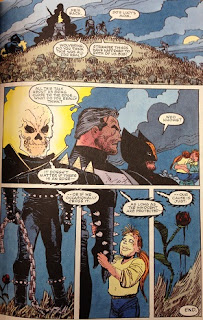 MY THOUGHTS:  This story has the potential to be the absolutely most 90's Marvel book ever.  It has Ghost Rider, Wolverine and the Punisher fighting a powerful demon from Hell. All it is missing is Spider-man, Gambit, Cable and tons of giant guns and/or busty women.  Guess what.  Mackie and Romita made sure it wasn't!

Sure, sure, there are a few instances of going over the top and it does star three of Marvel's most popular characters at the time.  But I chalk that up to marketing a lot more than I do being a 90's trope book.

The story is actually a really well told one, for the most part.  I'll be honest.  Sometimes a few things feel like they got left on the cutting room floor, so to speak.  Blackheart's capture of Lucy, for example, probably could have been shown.  Still, the story is a pretty solid one.  The main point is not so much darker heroes versus the supernatural but more along the lines of what really constitutes heroism and villainy.  Is it still being heroic if you cross the line now and again?  How far across can you go and still make the ends justify the means?  Notice the all refuse to harm the innocent to save the entire town.

Romita's art is outstanding.  The way he draws our three heroes is nothing short of incredible.  There are no 90's era extremes to be found in the art for them.  My main complaints come in the way that Wolverine looks less like he is sliding down the banister than just leaping downstairs and a few instances of Lucy looking almost too goofy.  I realize it's meant to show her as a young and somewhat gawky child, but it draws the eyes away from the main story and draws the reader away from the seriousness of the plot.  Otherwise, the art is perfect.

I can't think of a reason to not read this story unless you absolutely hate these characters.  It's not a story that you will want to pull out and read all the time, mind you, but something instead to revisit every few years.  Even with the double gatefold cover, this book is a reminder that sometimes there weren't tons of EXTREME moments in the 90's. Trust me, that's a good thing to be reminded of every now and again.
Posted by Clinton Robson at 12:30 AM