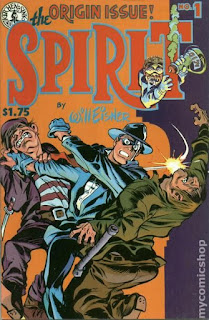 THE SPIRIT
BY WILL EISNER 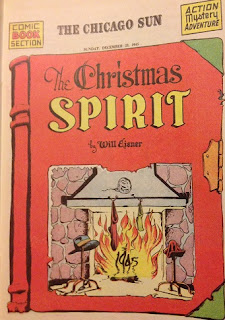 "Christmas Spirit"
SUMMARY:  With Christmas quickly approaching, Horton J. Winklenod, a noted millionaire, is informed that there is no such thing as Santa Claus, despite firmly believing in him.  Feeling a great amount of depression, he wanders aimlessly into the cold winter night.

The next day, men from Winklenod's business ask the police to help look for him, who in turn ask the Spirit to help out.  However, the Spirit refuses, saying the Christmas spirit is better suited to the task.

Elsewhere, several men as preparing to work as Santas during the Christmas season.  One in particular, Bugsy, is an an ex-con who says that he doesn't believe in Santa. One of his fellow Santas says that Bugsy should go ahead and write a letter for the real Santa anyway, just in case.  Bugsy indeed writes his letter, asking for a full pardon so he can fully go straight.

On Christmas Eve, two men find a nearly-frozen Winklenod out in the snow.  They bring him inside and thaw him out, but keep him locked away in order to collect the reward money offered by Winklenod's company.  That night, while the men sleep, a man comes down the chimney--Santa Claus himself, accompanied by a smaller gent also dressed in red.  As they attempt to take Winklenod home, he asks instead to accompany the men on their holiday rounds.  Before they leave, though, Winklenod leaves the men $5,000 dollars in order to start a new life.  Bugsy also gets his pardon, as well as $1,000. Winklenod spreads his money around to all the souls Santa visits that night.

The next day, Winklenod is warming himself at home, feeling proud of himself and happy that he has proof of Santa's existence. 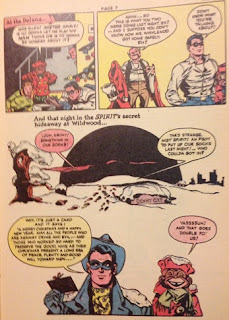 Back at the Dolan residence, Ebony White asks if he will ever get a turn to play with his Christmas toys. Mr. Dolan comes across the Santa costumes and deduces that the two gentlemen have had a busy night.  But back at Wildwood Cemetery, the Spirit and Ebony find surprise Christmas notes of their own. 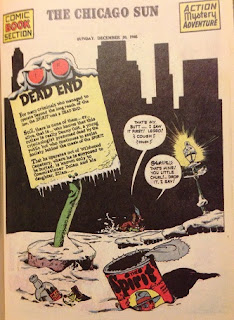 "Dead End"
SUMMARY:  In a snow-covered park three men who appear to be bums fight over a found cigarette butt.  It turns out the three are actually old foes of the Spirit--Mr. Fly, Hush and The Squid.  The three, after a small squabble, concoct a plan to discover the Spirit's identity and collect the reward attached to such information. 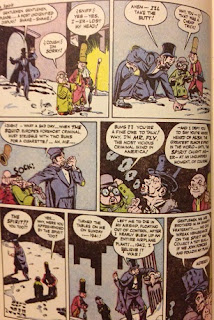 The next day, Ebony White rushes to the secret hideout of the Spirit to warn him about the crooks' plans.  Spirit is less than impressed and considers the entire affair a mere rumor as he put all three of those men in their place years ago.

The next day the Dolans and Ebony have planted a story in the newspaper about selling information about the Spirit's identity.  The three criminals, along with two men named Godplefuss and Mickelholler, take the planted story to heart.  The only difference between them all is Mickelholler has invented a pocket-sized atom bomb that he is unsure when it will explode (because comics, right?)

Hush and Mr. Fly both attempt to arrive early to the meet-up and end up encountering Mickelholler and Godplefuss.  As they all argue, a man walks in with the Spirit at gunpoint.  In the ensuing scuffle the Spirit knocks them all unconcious, as well as knocking over a can of gas which gets lit on fire.  Spirit reveals himself to be Squid in disguise, who collects the bag of money, which also contains the pocket-sized bomb.  As he walks away, though, he hears a small ticking...and then the bomb explodes!

The next morning, Commissioner Dolan says that the site of the explosion only had scraps of clothing around a burned building.  With no bodies, he says the whole matter is closed. 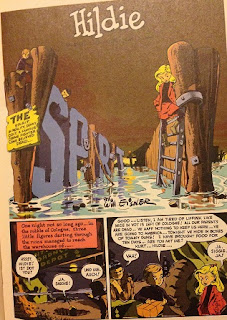 "Hilde"
SUMMARY:  In Cologne, three young European children come up with a plan to escape the ruins of a war-torn country for the freedom of America.

Two months later, kid gangs are running amok through the city.  Commissioner Dolan sends a disguised Spirit to help escort a young student by the name of Clarence Belmont home.  Along the way, "Officer" Spirit and Clarence discuss the kid gangs, as Clarence is afraid they are targeting him for the information he possesses.  Clarence knows their hideout, but before Spirit can get the info, they are jumped by the gang and Clarence is taken away.

Hilde jumps Spirit, but he gets the better of her.  However, she screams that he is beating her and passersby assault him, letting Hilde escape.  Elsewhere the gang holds court and determines that Clarence is a squealer.  However, some of the kids say Clarence shouldn't be killed.  Siggie, the leader, has all who sided with Clarence thrown into the shed that serves as their makeshift jail.

Siggie's plan is to meet with a fence to unload some merchandise.  With that much money he and the others can escape to South America.  Hilde overhears his plan and their torture of Clarence.  She and Dick are desperate to escape so they can contact the Spirit.

Hilde and Dick manage to escape and meet up with Spirit and Dolan at police headquarters.  They take the men back to the hideout.

At the hideout, the fence has decided that he will be taking over the kid's operation instead of paying them off.  About that time, the Spirit and Dolan show up, with Spirit soundly thrashing Fence and his gang.

Days later, the kids talk with soldiers who fought in the war.  The soldiers explain how they fought the good fight so that the kids could live their lives in peace and that becoming criminals just wastes said lives.  We also find out that Hilde has been studying heartily and no longer has time for dates with Dick for quite some time. 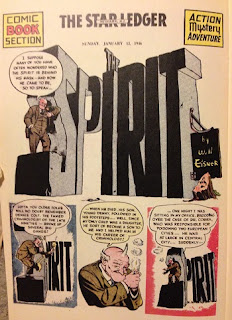 "The Spirit"
SUMMARY:  Commissioner Dolan tells the tale of how Denny Colt became The Spirit.  Colt was working a case on the trail of Dr. Cobra.  Cobra had invented a liquid that could preserve a human for hundreds of years.  Colt, in the process of trying to bring Cobra in, gets ambushed from behind and accidentally discharges his weapon, causing the preservation serum to spill all over him while knocked out.

One night after Colt's funeral, Dolan is visited by a man dressed in a blue suit and hat who calls himself The Spirit.  This mysterious man is on the trail of police informants.  Dolan rushes downstairs after the man and hops into the taxi of one Ebony White, a "child prodigy" at driving.

Arriving at the cemetery, Dolan finds the Spirit paying off some hoods for information about Dr. Cobra's whereabouts.  Dolan easily puts the information together and recognizes Spirit as Colt.

The Spirit and Dolan track down Cobra and his men and bring them to justice with ease.  Colt tells Dolan that he prefers to remain "dead" for the time being and shall continue operating as the Spirit in order to help bring in criminals as a vigilante. 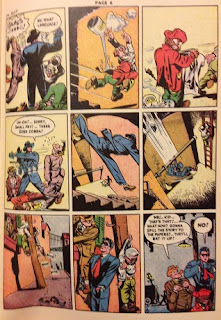 Dolan ends his tale by asking the reader to not reveal any of this information to the outside world.

MY THOUGHTS:  Well...I'll be honest.  This was my first time to read any of the original stories done by Eisner.  I mean, I was familiar with the characters and concepts from other interpretations and such, but I had never gotten the chance to read reprints of Eisner's originals before.  There a times when you can honestly look at these stories and say "Yep, that's the 1940's" and other times when you are like "These were done in the 1940's?!"

The Kitchen Sink issues reprint Eisner's Spirit stories that were publisher post-World War II, so everything comes from the mid-40's and after.  There are the overly-stereotypical depictions of Ebony White, but terrible racist depiction aside, I didn't see anything there that wouldn't be found in movies from around the same era either.  Goodness knows those oh so sweet and wholesome Shirley Temple movies have enough similar depictions.

The plots are fairly simple but not overly so.  For there to be four stories in this issue, there is a ton of content.  While it can be argued that each story is essentially the same (crimes happen, the Spirit is called in, he saves the day, repeat), they are indeed different enough to be enjoyed without being compared to the others.  The Christmas story is fun and lighthearted with a sweet moral at the end.  The story about the villains teaming up is pretty silly and reminded me of the Captain Marvel stories by C. C. Beck.  "Hilde" reminds me of element from Batman and Dick Tracy while still being written in a way that adults and kids both can find fun. There is enough reality and seriousness to keep the story grounded but the aspect of an organized gang of minors helps move it along with entertainment for all.  Finally, the origin story is pretty typical, but I do really enjoy that it is Commissioner Dolan telling the story, not Denny Colt or Ebony White.

The art...well, what can I tell you about Will Einer's art that you don't already know?  Yes, it is true that Eisner used his own studio or artists to churn out a lot of the work and signed his name to it, but that was common practice in those days. Many assistants became recognized artists in their own right.  Ignoring that, though, I have to say that this art has a level of quality and detail that doesn't seem like it belongs in the mid-40's.  Compare one of these to an issue of Action Comics or Detective Comics from around the same time period and I am certain the Spirit story will look a lot more visually appealing.  It really reminded me of something closer to the Silver Age stories when detail became much more important.  The art in these stories could literally be described as decades ahead.

I don't need to to tell you that I loved this.  It's obvious by the above review.  If semi-silly crime busting isn't for you then avoid The Spirit.  If you prefer your vigilantes more serious like The Shadow, consider this for a more relaxing read that may make you smile.  However, if you love quality art then you must find some of these books.  You will not be disappointed, I promise you that.
Posted by Clinton Robson at 5:16 AM