SYNOPSIS:  It is winter in Gotham City.  At Arkham Asylum, the powers that be are being verbally assaulted by lawyers and psychiatrists.  They are making their case known--they represent the Joker who apparently only wants to have a visit with his sainted mother.  As much as the Arkham officials dislike the idea, they have agreed to the meeting, giving this mother a thorough search beforehand.  As the two sit down to talk, the Joker is handed a Bible, which the guards failed to check.  It begins to emit gas, which the Joker uses as a diversion in order to escape.

As it turns out, this mother was nothing more than a goon in disguise.  Amidst the confusion, one of the guards attempts to stop the Joker from escaping outside on the grounds, but instead shoots the lawyer, the Joker having switched clothes with him.  Outside Arkham, the Joker finds a taxi waiting for him, the driver either oblivious to who the Joker is or simply not caring in favor of a fare, to take him back into Gotham.

Elsewhere, Time Drake is doing his first solo patrol of the city.  He narrates the the cold snowy weather is keeping even criminals indoors. However, his hopes are dashed as the batsignal lights up the night sky.  Commissioner Gordon is hesitant to let the new Robin know the full situation, but eventually confides that the Joker has escaped. Batman is out of the country, so Tim (along with Alfred) is pretty much on his own with this one. 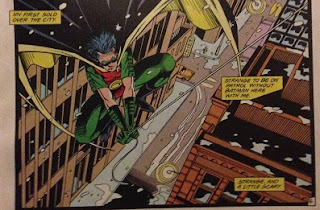 Arriving at an old hideout, the Joker walks in to find his old gang has been taken over by none other than Mister Freeze.  Joker pulls some guns on Freeze, which turn out to be water pistols. He squirts Freeze, causing ice to obscure Freeze's vision.  As Freeze is attempting to remove the ice, Joker takes the opportunity to hit him with the typical Joker joybuzzer.  As Freeze lies on the floor, seemingly dead, Joker tells the goons it is time to get busy working on his plan. 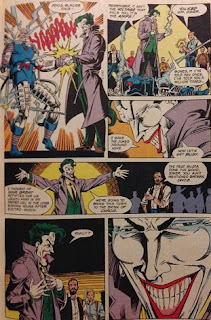 The next day at school, Tim Drake is at his locker, listening to his unpopular friends discuss setting up a gaming session for an RPG they like to play, inviting Tim over to play.  About that time, one of the more popular and typical bully-esque students comes by to tell everybody that he is having an unsupervised party this weekend and, surprisingly, invites Tim over. Tim declines, saying that he'd rather stick with his friends, but also declines their invitation.  He has "a lot going on at home right now."

Later on, Robin investigates the Joker's cell at Arkham.  He discovers that the Joker has developed an interest in compute magazines.  Back in the cave, Tim and Alfred discuss this latest development, noting that many of the articles focus on or were written by Dr. Osgood Pellinger, a man who decries the increasing reliance on electronics.  Meanwhile Alfred has been monitoring the newspapers for any crimes or possible crimes.  Tim decides it's time to go back out and investigate in person. 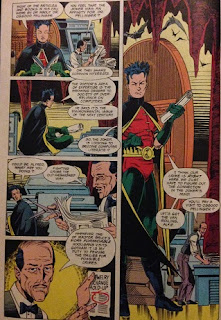 After having Alfred drop him off, Tim spends an hour monitoring Dr. Pellinger's home.  As Dr. Pellinger gets into his car to leave, a snow plow shows up behind his vehicle, which is odd since this street has already been plowed.  It is the Joker and he uses the plow blade to lift Pellinger's car into the bar of the large vehicle.  Robin lands on the roof of the snow plow before having to leap down in front of the windshield to avoid gunfire.  The Joker, upon seeing the new Robin, reacts with shock and rage, screaming that he already killed Robin. Joker's driving causes Robin to fall off, but afterward Alfred tells him to not be discouraged.  However, they quickly realize they need to keep the Joker from finding out that Batman isn't in Gotham, but neither one has a plan. 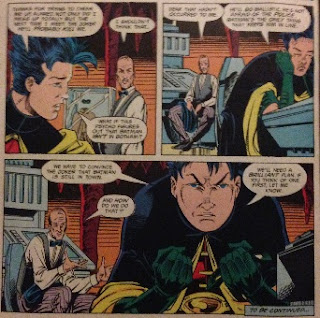 MY THOUGHTS:  I am conflicted.  Normally I tend to dislike a lot of the Joker stories out there.  I remembered not being a huge fan of this one back in the day, despite being a huge Tim Drake fan.  Tim was just coming into his full Robinhood (not Robin Hood, ha ha) at the time I really got into comics, so he and I quickly became acquainted.  But really, this didn't stick with me back then.  I remembered it as being a story about how the Joker was this incredible big bad guy who nobody could deal with.  Looking at it now, that element is still there, but it comes across differently.  It's more the fear the characters have of what the Joker might do if he doesn't think there is anybody out there to stop him. 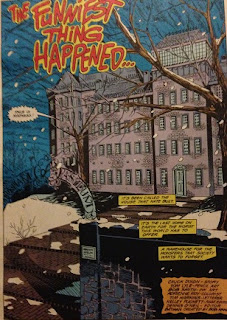 With that in mind, this is still Tim's stories, not Joker's.  Dixon does an amazing job of telling that story.  Anybody familiar with the Batman family of books at this time should know the name Chuck Dixon.  He is the author who chronicled Tim's teen years and helped break Nightwing away from the Titans into his own adventurer.  I'm not going to sit here waxing Dixon's car all day/night.  Short version, I'm sorry I ever dismissed this story before.

The characterization of the Joker in this is pretty much the wacky Joker we see in Batman the Animated Series.  He's silly and always ready with a quip or a pun, but at the same time calculating and sinister. 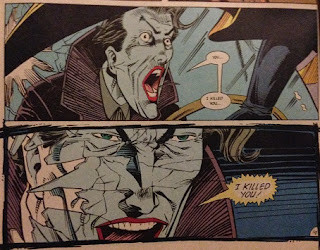 The art is downright awesome.  There are a few scant moments when things look bad (especially Pellinger's face when he's getting scooped up) but otherwise the art is beautiful.  The Joker looks better than he did back in the days of "A Death in the Family."  Tim's costume looks exquisite. Even the weather has personality in this book.  The snow smashing on Tim's cheek conveys a wonderful sense of the wind and cold that Tim is probably experiencing while on patrol.

Did anybody notice Mr. Freeze? 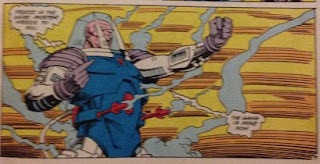 I'm not entirely sure how often this design was seen at this time, but I remember the action figure that came out with this design.  Remember, this is before BtAS reinvented Mr. Freeze as a tragic villain.  He comes across as a second-rate villain akin to Killer Moth in this issue because he still essentially was.  He only becomes a bigger threat after the animated version ups the ante.  That giant suit is fun to me, but the sleeker designs that come later are a lot easier on the eyes.

Overall, this was a fun trip down memory lane.  I'm glad I got to look at it again all this time later now that I have more experience.  The book flows well and the art helps convey the story easily.  And best of all, it proved that Robin could function without Batman in more than just a one-off story.  Tim Drake fans really need this story (which has been recollected in one of the recently released Robin trades).  Joker fans might not want to miss this one, either.  The story about reliance on electronics, while dated in its depiction, is still fairly relevant 20+ years later.  A fun read, but one that might hold some unexpected elements.

Posted by Clinton Robson at 3:04 AM

Email ThisBlogThis!Share to TwitterShare to FacebookShare to Pinterest
Labels: DC, Robin, the Joker