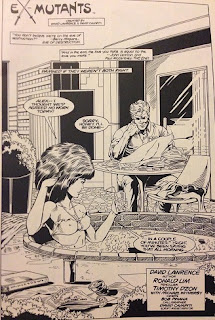 SYNOPSIS:  On a high-rise penthouse terrace, a man and a woman are enjoying the lap of luxury.  He mills over laboratory blueprints while she relaxes in the hot tub. She reminds her husband that this is the last day that he will be able to see her for six months, as she has to leave on business the next day.  The two decide to spend the rest of the afternoon doing...other things. The next day she leaves on a plane. Nine weeks later, the world as they know it ends. 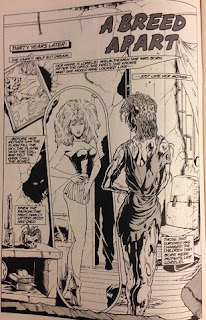 Thirty years later, a mutated woman named Lorelei stares into a full-length mirror and dreams on the woman she would have been had she remained human.  Dr. Emmanuel Cugat and other mutated individuals come to Lorelei and tell her that they will try to help restore humanity to what it once was.

Flashback to how this mess all began. The bombs dropped during World War II were only the beginning. Other countries developed atomic and nuclear technology. It didn't matter who set off the first bomb because every country capable soon followed suit, quickly whipping humanity away and making mutants of the survivors.

Dr. Cugat manages to dig out a power source for his experiment to restore humanity.  We learn that the current populace of Earth is generally violent and chaotic. Food and water are the most valuable things, followed by base desires.  We also learn (or at least infer) that Cugat is the son of Alex, the man from the prologue.  Lamenting over what humanity has become, Cugat naps while his machines work.  When he awakes, he fears he may have let them run too long.

But no! The experiment was a success.  Four females and one male have been turned back into humans.  Erin, Belushi, Vikki, Angela and Lorelei have survived the process, made into the peak versions of themselves from their genetic structure. Lorelei isn't how she had always dreamed, though.  She is actually black due to Cugat having to use the strongest traces of human DNA remaining in their genetic structures. 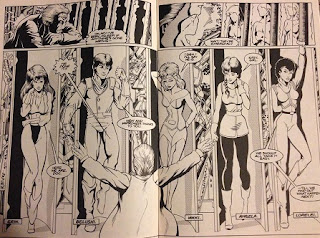 Cugat trains the five ex-mutants physically and mentally.  They learn skills to help them survive in the outside world.  Along the way, they become something of a family.  However, one day Cugat tells them all it is time to go out into the world and try to inspire the populace to return to a more peaceful--more human--way of life.  Cugat makes a grand display of introducing his ex-mutants to the world, one which results in a physical encounter that is quickly dealt with by the humans.  The surviving mutants run off to tell their leader Great Fred about the events. However, one of the survivors sees the humans not as a threat but as new gods. 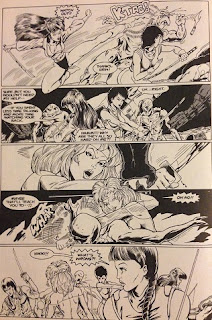 Cugat gives his "children" a remade automobile and sends them off.  Inside the lab he appears to be talking to himself, however it is revealed there in another human woman inside a tube similar to the ones that remade the ex-mutants. 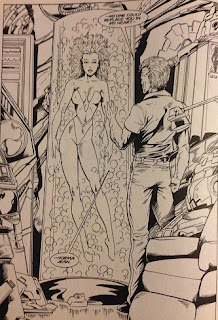 Great Fred, ruling from the top of the Empire State Building, is told of the day's events. He says he has seen. Now he will tell the others how to proceed. 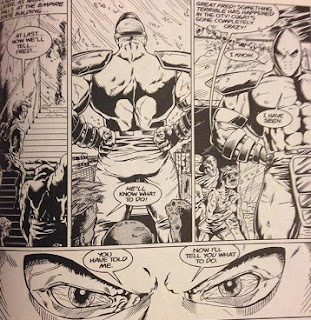 That night, the ex-mutants make camp, have dinner and discuss what their dreams always were. Belushi's were always about sex, apparently.  As they all turn in for the night, each of the women takes a long look toward Belushi's tent, then heads for her own, except Vikki.  As the last to go to bed, Vikki sneaks into Belushi's tent and initiates a sexual encounter between the two. 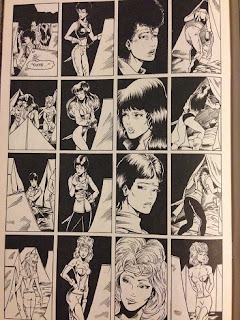 The next day, mutants resembling Harpo and Chico Marx observe the car driving away, setting up plot points for later on. 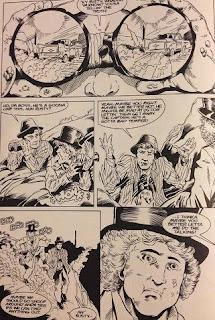 Belushi's careless driving causes the group to wreck and the story ends with monstrous figures approaching their bodies. 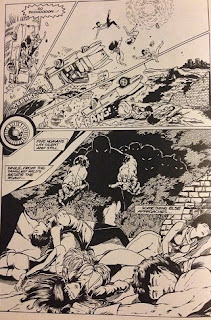 MY THOUGHTS:  First, a note of thanks to Prof. Alan for this week's book.  A wonderful gift that I and highly thankful for.

OK, so before reading this I was only familiar with the Malibu Comics version that came later on.  It has the same general plot, more or less, but instead of the 4-to-1 dynamic there were three males and three females, different names, designs, weapons, etc, and they were revived by a robot, not a mutated scientist.  It was all pretty early 90's, so just go with it.

Anyway, this version is more an example of the heyday of black and white comics in the 80's.  The plot is pretty standard sci-fi fare, but done in a manner that doesn't seem too full of tropes.  They are there, don't get me wrong, but they aren't thrown in your face constantly.  The concept of being left alone to fight the mutants that vastly outnumber the humans is paralleled in modern times by the zombie horror genre.

At the same time this is also a story that can be seen as wish fulfillment of the authors with Belushi almost being a Marty Stu/Gary Stu character as found beautiful women have different levels of attraction to him, but all seem highly interested.  It all depends on your level of suspension of disbelief on how much this might bother you.

The Harpo and Chico cameo is highly enjoyable.  I really like the Marx Borthers' films, so these two showing up (and looking perfect, I might add) was a real treat.

Great Fred reminds me of some Mad Max/Road Warrior stuff.  Love it!

Do I really need to tell you about Ron Lim's art?  I know I waxed his car on this blog back around Christmas last year, but I'll add another small coat now.  Every line seems like it was designed for no other purpose but to deliver joy to the readers.  His artwork switches from lighthearted to serious to semi-erotic to frightening as needed by the story.  The story itself could almost be told without the captions and dialogue but instead by the art alone.  Truly Ron Lim at the top of his game!

As should be obvious, I really loved this.  The story can get a little corny and trope-filled, as well as appear to be an outlet for the authors' personal daydreams, but isn't all good science fiction that in part? Superman and Batman have both been shown to be, at least in part, wish fulfillment stories of their authors, so why not this?  The point is to tell a good story, not necessarily usurp War and Peace's place as one of hisotry's great tales.  Believe me, if you enjoy good sci-fi, you'll have fun with this.
Posted by Clinton Robson at 5:41 AM