ADVENTURES OF THE X-MEN #9 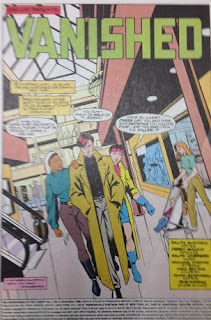 SYNOPSIS:
Gambit, Storm and Jubilee are walking through the New Salem Mall, attempting to find some small measure of cheer in the commerce at hand.  Gambit has been depressed lately over the death of his brother, despite having caught his killer.  The trio enters an electronics store in order to replace Storm's broken television.  Suddenly one of the TVs turns on by itself and the image of Spiral, servant of Mojo, appears on the screen.  She teleports into the store and informs Storm that Mojo has requested her presence on Mojoworld. Mojo's invitation is not to be refused, so before Jubilee and Gambit can help Spiral and Storm are gone. 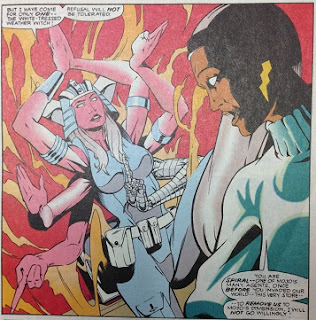 Elsewhere, inside the conference chambers of the Hellfire Club, Sebastian Shaw and the other members of the Inner Circle are inducting their newest member, the Vanisher.  One final test remains for Vanisher to gain full membership. He is to steal some Sentinel blueprints and bring them back to Shaw.  Vanisher teleports away, but after he is gone we see Shaw confess to the other members that he plans to double-cross Vanisher. 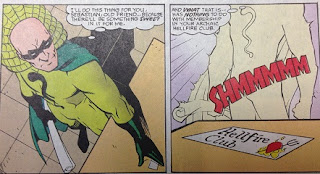 Reappearing in a government facility, Vanisher is ready to steal the plans but is quickly set upon by two guards.  He manages to quickly teleport around the room, dodging gunfire until he can sneak behind the guards and knock them out.  Once he has the plans, Vanisher makes sure to leave a Hellfire Club business card on the table before teleporting away.  Reappearing in front of Shaw, Vanisher is shocked to find out the not only does Shaw possess his own Sentinel, but he has also been working with Dr. Boliver Trask, creator of the Sentinels. 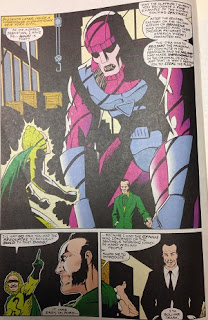 Back at the X-Mansion, Gambit and Jubilee rush to inform Professor X about Storm's abduction. Xavier says that they have no way to cross dimensions, so Storm may be truly lost to them.

In Mojoworld, Spiral and Storm reappear. Storm is now wearing her X-Men uniform when moments ago she was wearing normal clothes.  The two women walk in and begin their meeting with Mojo when a man known as The Vroot interrupts them for some comedy beats before being dropped down a trap door.  Mojo gives Storm the terms of her contract to which she continually refuses stating that she wishes to be returned home immediately before Mojo "politely" informs her that all he wants is a year and he'll return her or he can just kill her now.  Storm reluctantly signs the contract.

Back at Shaw's warehouse, the three men discuss how long it will be before the Sentinel is fully operational and profits can be made (as well as personal goals attained).  A man rushes up to tell Shaw that a Hellfire Club card was found in the vault at the Pentagon.  It takes no time for Vanisher to be found out, but he still takes time to gloat about how cleverly he paid back Shaw for earlier insults.  Shaw orders Trask to start up the Sentinel.  It immediately designates Vanisher as its target (it is not revealed why it doesn't detect Shaw as a mutant).  Vanisher's vanity gets the better of him as he delays teleporting away just long enough to be hit by an energy beam that negates his mutant powers.  Instead, now Vanisher must literally run for his life as the Sentinel robot crashes through Manhattan after him.  As he ducks behind a car to hide, Vanisher hopes and prays that the beam's effects are only temporary.  Luckily for him, they are as he teleports away mere seconds before the Sentinel's massive fist comes crashing down. 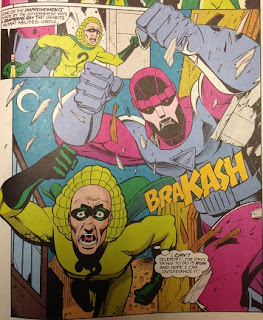 Vanisher has teleported to the only place he thinks he will find help--the home of the X-Men.  Gambit, Cyclops, Jean Grey and Professor X all rush out to see what is going on.  Vanisher has only moments to explain that he's being chased before the Sentinel appears.  The X-Men begin to attack with Cyclops uncharacteristically telling everyone to "just cut loose."  After a few failed attempts to damage it, they soon realize this Sentinel has been upgraded but still has weak points in the neck.  Jean uses her telekinesis to tilt the Sentinel's head while Cyclops and Gambit bombard the exposed area, knocking the robot's head off and shutting it down.

Vanisher wants to know how he can repay the team.  They explain the situation with Storm and Mojoworld.  After having Jean mentally implant the location of Mojoworl, Vanisher teleports them offworld, leaving Professor X to worry about his students and hope for a safe return. 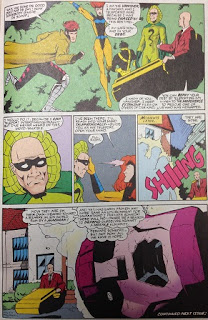 MY THOUGHTS:
OK, so a few things to take note of first.  ADVENTURES OF THE X-MEN was a series that came about after the cancellation of X-MEN ADVENTURES.  Confused yet? No?  Good.  X-Men Adventures was a comic book series that adapted episodes of the X-Men cartoon that aired on Fox from 1993-1997.  After adapting the first three seasons, Marvel cancelled X-Men Adventures and started up with Adventures of the X-men in 1996, which produced original content set in the same universe as the animated series.  This comic lasted until shortly after the cartoon's cancellation in 1997.

Now that we have some background information out of the way...this issue is such a mixed bag of nuts.  First, it should be mentioned this issue came out at a time when the budget for the X-Men cartoon had been drastically reduced.  The art, which had been highly detailed for a cartoon of the era, had gone to a more minimalist style in order to get quickly produced and the writing had gone from decent adaptations of the more famous comic stories to quick half-hour adventure tales with poorly veiled morals. Sorry, I'm trailing off again.

*ahem*
Let's start with the art this time around.  This issue has some very rushed art, it seems.  The book it full of inconsistencies such as Storm's costume appearing (although the cartoon established that somehow she can change her clothes into her costume, so I can forgive that, I guess), and Storm's hair appearing and disappearing in different panels for no real reason.  To my best guess, I'd have to say that this book was done to keep appearance with the style of the cartoons as mentioned above.  However, even then this has pages where it looks like Aucoin turned in a rough sketch and the rest of the art team did the best they could to clean it up before being rushed to the publishers.

Keeping in mind that this was a more kid-friendly Marvel book at the time, I can understand the simpler style, but it just feels like they were insulting their readers by letting something like this pass for a quality comic.

Speaking of readers, I have to admit that aside from having to remind myself that this was the cartoon universe, I actually found myself enjoying this story a lot more than I expected.  The typical tropes that go along with the cartoon are here--going to the mall, Trask and his Sentinels, etc.  However, bringing the Vanisher into the series was a plus, and Spiral kidnapping Storm was actually pretty intriguing.  I'm genuinely curious to see what kinds of plans Mojo has for Storm.  The idea of the Hellfire Club controlling a Sentinel (or potentially an army of them) is certainly a fun and intriguing plot point.  Hopefully the series lasted long enough to see this come to fruition.  As the series was cancelled with issue 12, however, I doubt it was ever even brought back up.  Kudos to Ralph Macchio for such a fun idea, but boo to Marvel for not letting him run wild with it.

Overall, this is a fun read and a nice distraction for a time.  The art is horrendous for the most part, but if you can look past that and just enjoy the story then you won't feel too cheated.  Hardcore fans of the 90's cartoon should love this, but casual X-fans might only want to consider it on a whim. 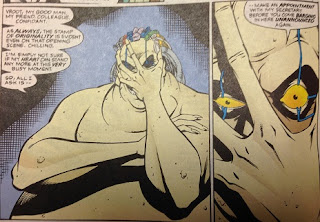 Posted by Clinton Robson at 4:47 AM