For those who aren't familiar, Free Comic Book Day is the first Saturday in May. It is a day for comic book stores to give away comics to customers both as a token or appreciation to loyal customers and as a way to try and bring in new readers.  For more information visit http://www.freecomicbookday.com

My kids and I have made this event a yearly tradition, and hopefully many of you out there do the same. This year I was fortunate enough to pick up several great titles. Today I will take a very brief look at three of those.

SYNOPSIS:  This issue features three different stories, all centered around the idea of having multiple versions of The Tick.  The first, "The Council of Ticks," shows Arthur encountering a group of Ticks who keep appearing at semi-regular intervals from across the multiverse.  Thrakkorzog appears long enough to inform them that having that many Ticks together from across the multiverse is a bad idea as it will eventually cause the end of existence. 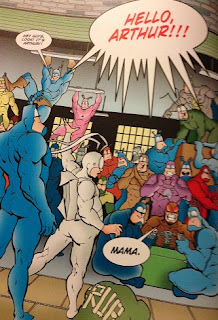 This leads into our next story, "Tick, P. I."  The various Ticks have decided staying cooped up together in a warehouse is a bad idea, so they are all (except our main Tick) piling onto a tour bus and heading out on the road. We get a flashback and gritty noir narration by a private investigator Tick. 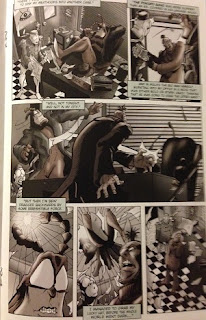 The third story, "Convention Season," features Tick and Arthur learning about an upcoming convention known as Tickfest 3000 which appears to be a celebration of our heroes.  The convention turns out to be an elaborate ruse to get Tick and Arthur to stumble into various deathtraps. Other heroes dressed as the Tick show up in an effort to get in free, which causes our villain to turn tail and run. 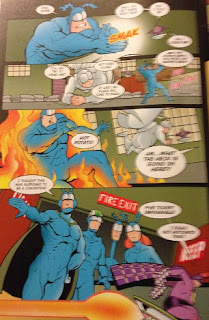 MY THOUGHTS:  This issue was a lot of fun.  I'm not a regular reader of The Tick, but I always try to grab the FCBD issue.  Longtime readers of just casual fans who enjoyed the cartoon (like me) can easily enjoy this one.  The stories were genuinely funny with some great puns and sight gags.  The art is right there in perfect Tick style that will remind readers of the cartoon, even if Arthur appears to have put on a few pounds.  The variety of Tick designs from across the multiverse are fun to see and of course the callbacks to classic superhero stories/themes are always a pleasure to see.  A wonderful issue all around. 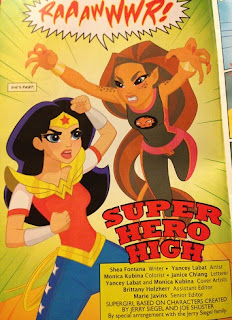 SYNOPSIS:  Finals Week is quickly approaching at Superhero High School.  Wonder Woman, Batgirl and most of the other heroes are looking pretty relaxed and ready for the upcoming tests. Supergirl, however, is in a panic.  So much so, in fact, that Kara makes an unscheduled trip to Smallville to have a discussion about it all with Ma and Pa Kent, her adoptive aunt and uncle.  Supergirl recounts a story about her days on Krypton when she was bullied for being different and said bullying lead to her being distracted during her science final. Instead of growing a crystal to slightly larger size, she knocked over her formula causing the crystal to grow large enough to smash the classroom.  The Kents remind Kara that what happened then is no indication of what will happen now, but no matter what they will always be proud of her. With her confidence restored, she flies back toward Superhero High but gets taken down along the way by a kryptonite dart.  A mysterious figure promises that this is just the beginning of a larger plan.

To be continued in DC SUPERHERO GIRLS: FINALS CRISIS. 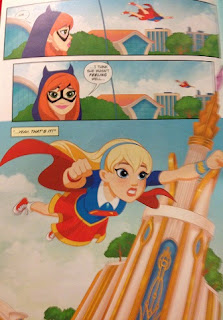 MY THOUGHTS:  I thoroughly LOVED this story.  It's short, simple and definitely on the easy-to-read side of things, but as it's designed as a kid-friendly book this is beyond acceptable.  Let's put it this way, my daughter loved this story probably more than I did. She lamented the "To be continued" moment with an audible groan.  She lamented the wait until July for the graphic novel even more--enough that even at 9 years old she created her own fan fiction ending. 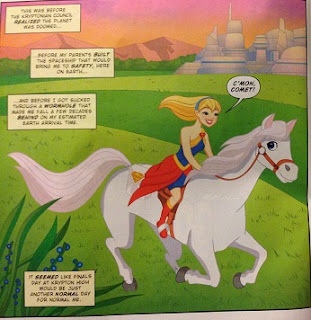 The art is probably the main drawback to this story.  It is a near-exact duplication of the style of the toys, which is not a terrible thing.  It just seems that the art team is not the best with facial expressions.  However, since this is pretty much simple art for a kids' book, I can't really complain.  This is an excellent book to help a young girl get into comics or expand her love of superheroes.

SYNOPSIS:  The Sonic Sampler provides two stories for the reader.  The first story presents Sonic taking on Axel the Water Buffalo in an effort to distract him from the efforts of Tails and Chip.  Throughout the story readers get a small bit of background on Chip and hist relationship with the other characters. 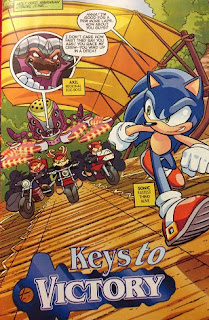 In the second story, Eggman and Metal Sonic encounter the handywork of the Naugus Twins.  Eggman recounts a prior encounter with the two magical characters before he and Metal Sonic get set upon by The Witchcarters.  The two groups engage in battle with Metal Sonic being quickly defeated and Eggman running for his life. 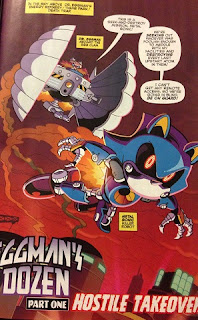 MY THOUGHTS:  Compared to the other two books in this post, this is easily the weakest of the three.  However, taken on its own this isn't a bad book.  It serves as a decent introduction for new readers to the series by letting them know what kinds of stories to expect in the coming year or so.  Within the pages is a checklist for key issues leading up to the next major storyline event so that new readers can know what to read to get ready.  Of the two stories within the issue, I prefer the second one, but not by much.  It's probably just because I like Metal Sonic a lot. Either way, pretty OK all-ages book and nice for big Sonic fans. Casual fans might not find as much enjoyment, but it's still enjoyable.

OVERALL:  It's pretty hard to go wrong with FCBD issues.  If you've never gone, I highly suggest checking for a local store participating next year.  If you are an old fan, feel free to share some of your thoughts and favorite books.  All in all, I'd just like to say hooray for sharing the love of comics.
Posted by Clinton Robson at 2:34 AM