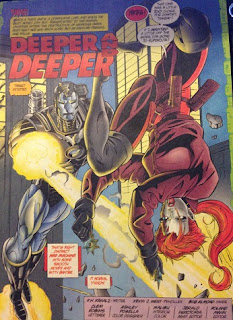 SYNOPSIS:  Out story opens with Siren and War Machine having it out.  We see her leaping and flipping out of the way of War Machine's energy blast.  As she lands, Siren tosses her shurikens at War Machine.  Even though they seem to bounce off his armor we can see that each tip of the shurikens contains a hidden component that shoots out some putty-like substance.  This putty lands on War Machine and begins to expand and entangle him, immobilizing him. A disembodied voice congratulates Siren on setting a new record of three minutes and nineteen seconds.

Switch to Siren in a Virtual Reality machine, proving that her fight against War Machine was entirely a simulation.  She tells the man coaching her that it feels just like the real thing.  Her coach takes the opportunity to toot his own horn as we are shown that it is none other than the supervillain trainer Taskmaster.  He tells Siren she will find weapons for her assignment downstairs.

In Philadelphia, at one of Taskmaster's currently unused training facilities, we see former-Avenger Diamondback crawling through air vents.  She relates a bit of her personal backstory while setting a bomb in order to destroy Taskmaster's school.

Back in New York, Siren is about as naked as a kid-friendly comic can get.  She's showering off all the sweat she worked up in that training session and reminding readers yet again that she is not a native of the main Marvel Universe, nor was her skin always pale white. 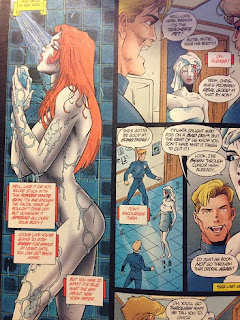 The Irredeemable Shag might have a few words about this.

She exits the locker room with a towel around her hair and another around her torso, only to be accosted by two other students at the academy.  Chris and Brenda don't think too much of Siren, referring to her as a mutie and claiming she got lucky beating another student in a previous issue.  Siren wastes no time slamming Brenda into the wall and whipping the towel from her hair around Chris's neck to put him in a choke hold.  She makes a point that she is the one in control of the situation and that the other two should be the ones afraid of her, not the other way around.

Meanwhile, Taskmaster is speaking with an unseen client about payment for the current assignment. 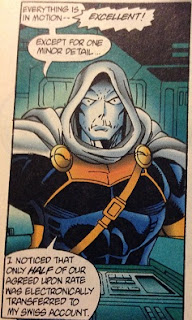 In Philadelphia, Diamondback is about to hop into her small aircar she borrowed from Taskmaster (obviously adding to the confusion if we hadn't read the previous issue), and she is lost in thought about her past.  A boy probably in his early teens holding a broom catches her off-guard.  He hopes that by taking care of any trespassers that Taskmaster will let him join up.  He moves to attack but Diamondback distracts him long enough to pull a smoke-pellet diamond out and quickly hop in the aircar and take off.  The kid, however, is quick and agile enough to manage to somehow grab hold of the aircar and dangle as Diamondback heads off. 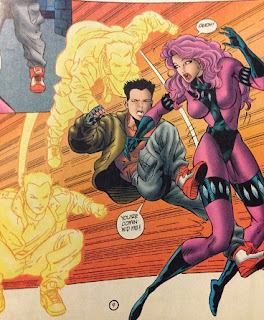 In Los Angeles, Siren has been traveling incognito, following her target, James Rhodes.  Rhodes has been traveling to various cities on behalf of something called Worldwatch.  Siren mentions yet again how her world and this one are similar and different at the same time.  Apparently  she has been relating this narration/information to Diamondback, who seems to be her partner on this assassination assignment.  However, a mystery man has been watching the two would-be-assassins and seems to be eager for them to draw War Machine out.

Later on in Marina Del Ray, at a biotech facility, Siren stashes some weapons under a bush before encounter Rhodes personally, hoping he will pay more than Taskmaster for his life. Rhodey brings the fight to her first until an explosion set by Diamondback distracts the combatants.  Siren rushes off to check on her partner while Rhodey ducks away to change into War Machine. He doesn't put on a suit as expected, though. Instead he touches a mark on his chest and a different set of armor than previously shown appears around him.  This new War Machine flies over and attacks the women, knocking Siren through a wall.  She notices a large green gem in a lab, which she quickly pockets before returning to the battle.  Diamondback can't hold her own against War Machine, but Siren manages to grab a gun from her hidden cache, hoping to even the odds. 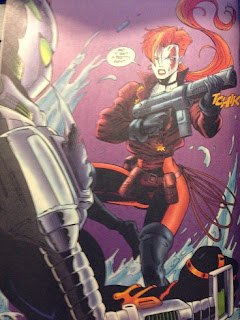 At Project Pegasus in New York, Whizzer speeds toward the rest of the Squadron Supreme telling them there are four new breaches appearing, powerful enough to upset the multiversal balance. 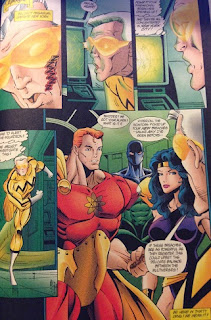 Siren #1 is not actually the first issue of this series.  When Marvel bought out Malibu, they had an event called Black September that helped introduce the few Malibu titles they were keeping into the Marvel Universe of titles.  They all have an "infinity" numbered issue to help bring that transition about and to possibly bring new readers aboard. Kanalz has written a story in this #1 that all but requires readers to has picked up #∞ issue.  Literally nothing aside from "Siren is not in her own universe" is explained inside the story.  How and why did she decide to study with Taskmaster? Why is Diamondback there? Where did Rhodey get this War Machine armor that absolutely nobody is prepared for and does it appear anywhere else in the overall Marvel U?  Being trapped in the Marvel Universe is clearly explained on the cover. The least Kanalz could have done was give us a little bit more support inside. 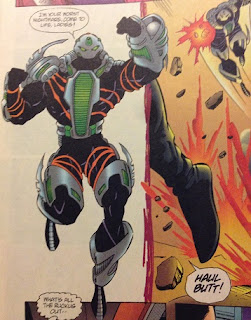 I promise you won't see this in Civil War.

The overall premise, though, is actually somewhat interesting.  An assassin-in-training who is the social outcast of her academy and trapped on a world like her own, but with only slight differences.  This should really write itself.  Throwing in a hodge-podge of Marvel characters just comes across as an attempt to make the Malibu titles marginally marketable in order to justify Marvel's purchase of the company.

Is it possible for the pencils to be done by a single person yet appear as though multiple people worked on it?  If so, that is the easiest way to explain what goes on here.  The initial splash page has a solid picture of War Machine but Siren herself looks disjointed and...well, quite frankly, like an action figure that has been moved into ridiculous positions.  Throughout the book we see instances when Siren and Diamondback both look perfectly fine and dandy and then mere panels later (or earlier) they look like a disproportionate mess.  Granted, this was the mid-90's and a book that Marvel editorial probably didn't give much thought about.  Still, a little care and pride in the finished product would be nice.  Taskmaster's head is entirely too small for his giantic-Liefeldian body. 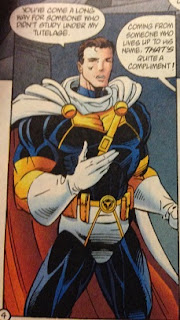 Speaking of Taskmaster, the entire portrayal of this character irks me! His is drawn as this hulking mass of muscle where usually he is shown as muscular yet lithe and agile.  This guy just looks like a posterboy for Gold's Gym.  His voice is all wrong, too. Before he had been shown to drop his G's when speaking and having a bit of an attitude.  Here he speaks eloquently and is highly encouraging to Siren. It's almost as if they wanted to have Professor Xavier speak to her.  Goodness, they didn't even bother to drawn the skull face on his mask, instead leaving it a poorly-detailed white mask with some sort of face.

Overall, like I said, I really want to like this.  I always enjoyed the Ultraverse characters from Malibu.  This Marvel take has potential.  If the creative team weren't needing to attach things so solidly to the overall Marvel Universe then there probably would have been a better story here.  However, things being as they are, I can only suggest this issue for completists and those looking to dive deep into Marvel's mid-90's EXTREME.  All others...caveat emptor. 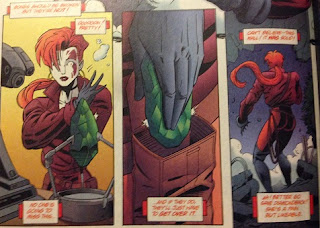