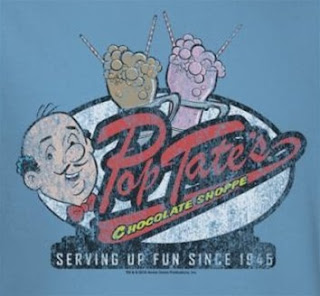 Something a little different this week on the blog, my coffee companions.  I figured it was time to relax a little bit and take a look at something most people take for granted--famous settings in comics.  This week, specifically, we'll look at that major staple of Archie Comics, Pop's Chocklit Shoppe.

So, for those unfamiliar, what exactly is Pop's Chocklit Shoppe?  Well, it's quite simply the local hangout for the teens of the little town of Riverdale.  It's easily the most recognizable location in all of Riverdale, even more iconic than Riverdale High School, the Andrews's house or even Veronica Lodge's never-ending closet of clothes.  But Pop hasn't been there from the beginning, like we would all like to believe, although in the grand scheme of things, he's definitely been around for quite a while. 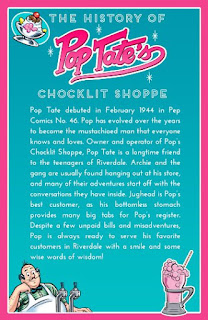 Pop's was a creation of its time.  In an era when the local teens of small towns across the U.S. would congregate at malt shops and burger joints after school, the creation of Pop's for the Archie gang as a place to gather was only logical.  Many movies and television shows set during the 1950's and 1960's have a business similar to Pop's--Mel's Drive-In in American Graffiti, Arnold's/Al's in Happy Days, etc.  In fact, Al from Happy Days serves as a live-action analog of Pop Tate. They both exist for a combination of sage advice and comic relief. 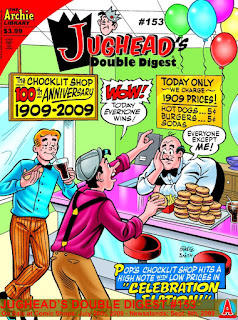 So what's on the menu at Pop's Chocklit Shoppe?  Well, that is a little tricky.  It is assumed that Pop is a master chef and can whip up anything the plot demands.  He has been known to serve pizzas, cakes, pies, and so forth.  However, his main menu items appear to be hot dogs (not to be confused with Jughead's dog), french fries, malts & shakes, sodas (which depending on the era can mean slightly different things), and of course hamburgers.  The hamburgers at Pop's are the favorite item of local bottomless stomach Jughead Jones and his endless appetite is what helps keep Pop Tate in business. 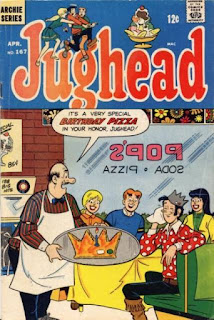 The look and decor of Pop's has changed over the years.  The building, as well as Pop himself, appear to have a timeless quality, as though they never really age.  However there are definite periods where one can see the influence of the times.
Pop's has been the location of many jam sessions for the band The Archies, as well as other music acts like Josie and the Pussycats.  When Pop wants, the tables and chairs can be cleared away to provide room for a dance floor. 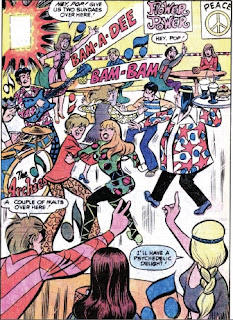 At one time in the 1980's, Pop decided to remodel a little bit and put down carpet in the Chocklit Shoppe.  Thankfully the idea didn't last, but it did help blend in with the style back in those days. 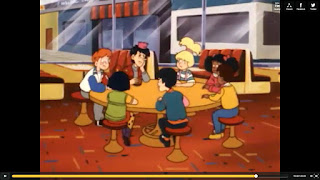 Yes, Pop's it truly a timeless establishment and deserves the patronage of all the residents of and visitors to Riverdale.
So the next time you find yourself in Riverdale, take a few minutes to stop in, order up a burger and a malt.  You'll be glad you did. 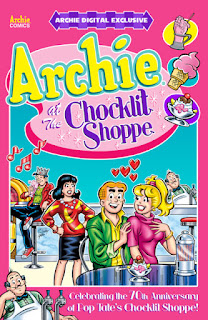