Ready for some spinal fluid sucking aliens? Of course you are! Here we go, folks!  We're getting knee-deep into Deathstorm, the third part of the incredible Bloodlines crossover!  We've fought the Outbreak, we've dealt with the Earthplague, but will we weather the Deathstorm? And if we do, will we be able to shower off before the Bloodbath?  Let's crank that enjoyment dial up to 11 as we dive headfirst into one of the best and brightest of this incredible event--Eclipso Annual #1!!!!!!


SYNOPSIS:  Scene--Salt Lake City.  Johnny Peril, quite possibly the coolest and most patriotic dude ever to sport a ponytail, is zooming in by chopper to do a meet and greet with none other than Linus Powell. 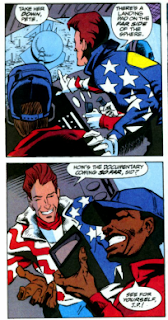 Powell, a totally boss genius of extraordinary intelligence and sensible work attire, has been given grant upon grant to develop this science thingy.  Heck, the dude got a Nobel Prize for theorizing a method of traveling faster than the speed of light.  Who needs the Flash when we have Linus Powell, am I right?  Anyway, Powell's using all this money to fund a project where he can put his light theories into practice. And for some reason it's in the middle of the Great Salt Lake.  Go figure. Maybe the dude just digs Mormon country.

Well, turns out your hero and mine, Johnny Peril, actually isn't sticking around to talk to Linus much.  It's actually Johnny's almost equally cool sidekick--er, camerman Sidney Bateman.  Bateman is interested in doing a documentary about Powell and his work.  Documentary? YAWN. Oh wait, we get a parting shot of Johnny Peril.  Gosh, I really wanna go watch a marathon of Johnny's show Thrillseekers.  Why do we want to stick with Powell (who mind you has brains and decent enough fashion) when we could fly away with badass Johnny?  Ho hum, such is the way of the story.  Hope the aliens liven things up.

Powell shows camera dude around the place, and apparently the main reactor is called Powell's Pile.  Pile of what is probably what every is asking, right? Well, seems Bill Nye the Science Guy here got himself a working fusion reactor.  Apparently all other reactors work by fission (splitting stuff up) but Powell's fuses them together.  Take that PBS! Comics taught us something...I think.  My head hurts.

As we progress through this exposition that we have all come to love in this amazing crossover, we come to find out that Powell's stuff is powered by...you guessed it Eclipso fans--a black diamond!  And camera guy knows it is one of Eclipso's diamonds. How? Dunno.  Who cares? Eclipso. Black diamond. Super mega ultra power for lightspeed stuff.  SCIENCE!!!!

Night approaches and Powell takes captain found footage up to the top of his omnisphere or whatever he wants to call it for what appears to be a romantic sunset.

No, wait, sorry. He wants to show the guy all his crazy security measures.  What for you ask? Why, Eclipso controlled people and animals all attack every freaking night to try and reclaim the black diamond, of course!  They go after Powell and the diamond like Gollum trying to snatch back the Precious from Frodo.  Powell just blasts the people with solar radiation and they turn back to normal folks who have no clue what reality is anymore.


This time, one Eclipso lady escapes and comes across a guy who is fighting off one of our spinal fluid sucking alien pals.  About time we saw one of them, right?  This is like page 14 for crying out loud!  Exposition be damned, Let's see aliens!  Well, Eclipso sees her transform back from monster alien back into not-really-but-let's-pretend-hottie and cooks up a plan to send alien girl in there so he can snag his diamond.  Alien gal turns back into monster form and slaughters the Eclipso body.  Trust me, that severed head on the beach...oh the kids and family will just LOVE it!  Probably use that for your Christmas cards this year, folks. 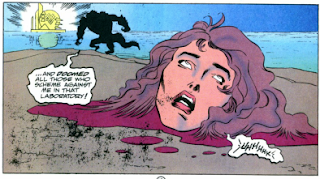 Greetings from the 90s. Wish you were here.

Alien lady barges into the science place like good ol' John Wayne entering the scene.  She wastes no time assaulting the people and destroying the scenery.  Extra kudos to the folks who decided to make the SQUISH sound effect look like the scientist's innards exploding all over.  Nice touch. 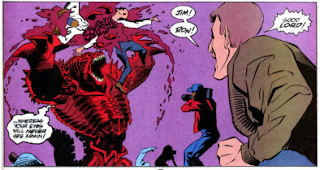 Anyway, in true Bloodlines fashion, Powell gets his neck suckered by our alien friend. In the confusion, Eclipso gets his diamond back but sneaks it onto the alien so he can take over her powerful body.  Yeah, feel the Eclipso rush! Powell crawls his way into the fusion reactor to try and stop it from exploding.  He's turning into sand at the time.  How freaky-deaky!  Guest what happens next.  Yep.  IT EXPLODES WITH HIM IN IT!!!!  Silly science guy.

He wakes up later on the beach.  Boy if I had a quarter for every time I woke up disoriented on the beach...I'd probably have 12 cents. Do the math.  OK, so waking up alive is good, right?  Well, Powell is now all angular and glassy.  Like really.  He looks like he's made of glass or diamonds on something.  Well, he's discovered by our real friends.  That's right, not those stinky alien guys, but instead the New Bloods!  Well, some of them anyway.  The really cool guys like Geist and Gunfire and Razorsharp couldn't make it, I guess.  We get secondstringers like Loose Canon, Anima, Sparx, Edge and Nightblade.  But whatever.  Any port in a storm, right? 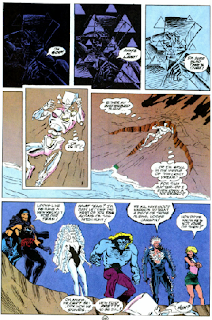 Of course a fight ensues, because Powell ain't having any of their crap.  He uses light-based attacks against them.  He can fire solar energy beams, create illusions of himself, turn invisible, and he's diamond hard.  He decides to call himself Prism, since prisms break apart light (see, more science and more headaches).  They all decide to call a truce, share origins, probably build a campfire and sing Kumbiya between panels...basic superhero team up stuff, right?  From here they head off to track down alien monsters and kick butt.

Meanwhile Eclipso alien returns to the hive ship thingy.  He realizes that the aliens are only trying to feed a higher intelligence. He wants no part of it, so decides that there is still time for destruction with this host body.

Back on the beach, the New Bloods are met by your hero and mine Johnny Peril! 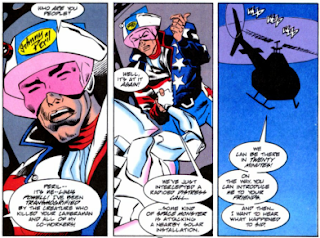 He intercepted a radio distress call and came running (well, flying on helicopter).  He takes the New Bloods to where they wanna go and wants to hear what happened to Sid the camerman, who got blowed up real good apparently.

Eclipso has bodies smashing solar panels and the like all over the place. Johnny lands to let the New Bloods try and take care of business.  He gets into Sid's stuff (which clearly says Keep Out on it, gosh!) and films the heroes beating up the bad guys.  That Johnny, always looking out for the little guy.  Dude needs his own comic, man.

Deep inside the facility, Prism easily defeat Eclipso and his goons as he turns the powers of darkness into light and shines them back at Eclipso like so much 80's cartoon glory it would make the Care Bear Stare look like nothing more than the reflection of the lightnigh off He-Man's sword mid-transformation.  But lo and behold Eclipso still has comtrol of the alien!  He takes on Prism one on one while the others still battle controlled bats and such.  Prism takes the black diamond and infuses it with so much solar energy that the diamond turns white and showers the Eclipso alien with pure solar radiation.

Prism once again wakes up on the beach with the New Bloods.  Eclipso is banished back to the moon and the new heroes decide to go after the alien, after helping all the injured civilians of course.  Because that's what heroes do on a bright new morning. 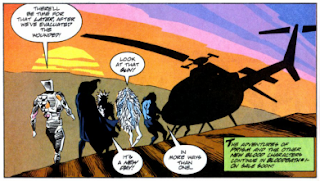 REVIEW:  Why isn't this in your collection yet?  I'll tell you why.  It's because so many people are out there hunting for this very issue that the well has gone dry.  Consider yourself lucky if you can snag a copy for anything less than $25, it's just that hot!

How can we fit so much heart pounding action and wonderfulness into a single issue?  Thank goodness it is an annual.  One single issue would have literally exploded in your hands if it tried to contain this.  Johnny Peril is too much for the common man, folks!  He needs his own series, but only the truly amazing may be worthy to purchase it. 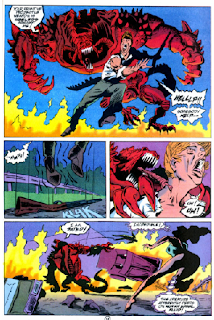 The art, oh the art!  So many angles! So many undetailed faces! So much smart fashion sense!  These guys totally knew how to grab a reader and say "Look at my thing I did."  Yep, it is real. 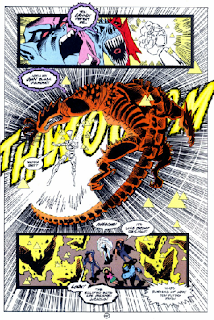 So, would this be worth buying? Absolutely. All Bloodlines are, dummy.  They are the best crossover event this side of Millennium and Underworld Unleashed!  Don't walk to your comics store for a copy--RUN!  Go to the counter and demand a copy.  I know the guy will have to go unlock is from his secure safe where he keeps all the Bloodlines, but it's worth it.  Be sure to tell them the old Coffee and Comics folks sent ya for that special Bloodlines fanboy discount.  You'll be glad you did.

To check out more dweebs like Nightblade, click the links below.
Resurrections
Relatively Geeky
The Summer Aliens Ate My Cake
I'm the Gun
DC Bloodlines Outbreak
Posted by Clinton Robson at 10:11 PM