Sonic the Hedgehog is a comic series from Archie Comics based on the best-selling series of video games and cartoon series starring Sonic.  The comic is known for taking its own direction with stories inspired by these sources.  This particular issue presents three self-contained stories that showcase some of the main cast of characters.


SYNOPSIS:  Sonic rushes toward a town in the middle of the night to try to convince everybody to evacuate.  "CATER-KILLER'S COMING!" he cries., waking the townspeople. There is no time for the people to leave, though. Cater-Killer is approaching too quickly. Aided by Tails, Sonic manages to break into Cater-Killer's "brain" and reprogram it to go plunge off a cliff instead of attacking innocents.  Sonic makes a cute pun which somehow goes over Tails's head. 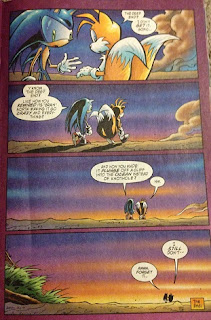 
SYNOPSIS:  Bunnie is captured by Jack Rabbit and kept prisoner in hopes that Sonic will come to rescue her.  After proving to be more of a nuisance than expected Jack releases a group of Robotoids to attack Bunnie but underestimates her strength and fighting ability.  Bunnie smashes the Robotoids and busts out of her prison, causing Jack and his gang to flee in terror. 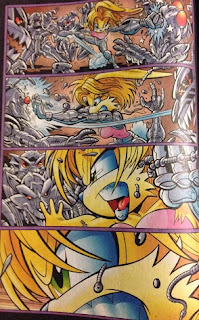 
SYNOPSIS: Rotor once again attempts to hack into the small self-aware computer NICOLE to find out where she came from.  NICOLE assures Rotor that he will find nothing. Multiple attempts prove this to be true, but the blocked access inspires him to upgrade his own computer security.  We see in a flashback/flashforward that NICOLE was actually built by Rotor in the future and sent back in time to help the Freedom Fighters. 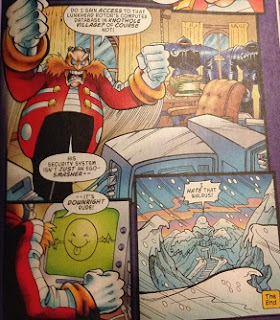 MY THOUGHTS:  First and foremost these stories are intended for a young audience.  With that in mind, don't expect anything too deep or moving from them.  Instead, picture the heyday of Saturday Morning Cartoons.  However, that doesn't mean you will find these stories lacking in the entertainment department.
Benny Lee and Karl Bollers deliver some wonderfully fun tales set in the Sonic Universe.  The synopses above pretty much spell everything out plotwise.  Nothing is really hidden, but there are nods to the ongoing story of the Freedom Fighters and their war against Robotnik.  Even with that, this is an issue that can easily be picked up and enjoyed on the fly.  The only regret is that it will take less than five minutes to read the entire issue, but that's only if you don't take time to marvel at the art.

The art is beautiful for an Archie published book.  Getting Ron Lim to pencil the main story is just amazing.  Stephen Butler and Art Mawhinney are no slouches either.  All the linework is reticent of the Sonic Adventure/Sonic X style.  The colors pop in all three stories, drawing the readers further into the stories.  If there is any sort of drawback it would only be found in those who don't enjoy looking as anthropomorphic animals.

Overall this is a wonderful issue to both look at and read.  It is easily accessible for new readers to the series (as well as those younger fans who are just starting to read period).  While it is certainly aimed at much younger readers, the book itself is an enjoying experience for fans of all ages.  A short read, but a wonderful escape into a fun-filled story that might just bring a few smiles of nostalgia to a reader's face.
Posted by Clinton Robson at 2:05 AM