SYNOPSIS:  After the events of "Judgement Day" and "Zero Hour," the League has been disbanded and is no longer sponsored by the United Nations.  Several heroes have disagreed over how to lead a team and have all gone their separate ways.  Wonder Woman, using the escape pod acquired from their confrontation with the Overmaster as a base, has begun to assemble a group of heroes who will continue the fight against the world's villains.  Hawkman, Metamorpho, Fire and Crimson Fox have joined up with her and it appears that the Flash, Nuklon and Obsidian are also interested. But will these heroes be able to work together as a team? And do some of them have less-than-pure motives for joining this new Justice League?

MY THOUGHTS:  OK, first off, there really isn't too much that happens this issue.  Wally (Flash) West keeps alluding to things that happened to him in previous issues of his own title but without any reference for what issues or any specific details, so bad form there.  The writing...well, let me wait and address that below.  I'm getting ahead of myself. 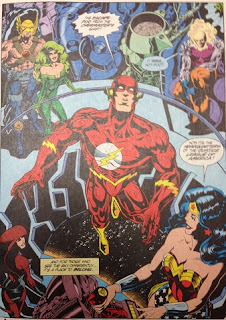 *ahem*
Alright, so after Wonder Woman's group picks up Wally, they all converse enough to get the reader more or less up to date on events.  Somewhat.  As opposed to most zero issues released at this time this one sets up a new story direction instead of revealing some hidden secret of the main character's past.  All of the League-related issues were set up for new story directions, so that's OK.  It feels like Mr. Jones expects a lot of readers to have at least some familiarity with the events of the last 3-4 months in DC Comics, though.  From here the assembled group of Wonder Woman, Flash, Metamorpho, Fire, Hawkman and Crimson Fox wander through the ship to their meeting room to wait and socialize until other heroes arrive.  The ship stops in California to beam up Nuklon, Obsidian and Blue Beetle.  Wait, Blue Beetle? If readers are aware of stuff happening in the DCU like the script seems to want them to, they will already know something is very odd about this.  Long story short, Beetle is really a disguised robot trying to plug the ship into the Internet somehow. The assembled group manages to stop him, with Obsidian helping to prove his worth to himself a little bit along the way.  They all decide to work together and seek out others who might also be willing to help, proclaiming themselves the new Justice League!

OK, so now I can talk about Gerard Jones's writing, right? RIGHT?! Good.  Honestly, it's not a terrible first issue in a new story arc.  Jones sets up several plot threads that he seems to want to examine, mostly through character interaction and thought balloons.  Crimson Fox is hoping to find her sister's killer; Metamorpho is still in love with Crimson Fox so he'll help her no matter what; Hawkman is trying to figure out just exactly who he is post-Zero Hour; Flash wants a place to belong; Wonder Woman and Fire just want to do the right thing but with a team; Obsidian and Nuklon are hoping people will view them as adults and not some joke.  All fairly legitimate comic book story tropes.

The problems come with some of Jones's inconsistencies.  I'll start with Wonder Woman since she bugs me the most.  Normally I love Diana in the League.  Here, she comes across as trying too hard.  Jones can't seem to get a handle on whether she is the commanding warrior princess or the airheaded naive lady new to Man's World.  Wally, meanwhile, acts like it is impossible to fit in with normal non-powered/non-hero humans.  As if he absolutely can not walk at a normal pace, take off his costume and go to the movies, etc.  I get what Jones wants to do, but it comes off and making Wally seem too self-absorbed and almost having a contempt for humanity. 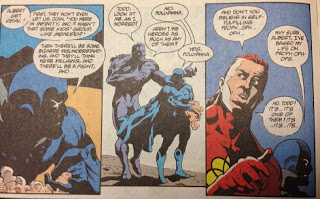 That isn't to say that everything in here is bad.  The interactions between Metamorpho and Crimson Fox are very clear and concise.  You get a real feel for them and kind of want them to explore things further.  Hawkman might actually get the least amount of "screen time" but you end up hoping for a lot more exploration of him as a character.  Nuklon and Obsidian steal the show, though.  Jones brings back moments of the BWA-HA-HA League days with a few one-liners here and there, but Nuklon and Obsidian are the new Booster and Beetle for this team, easily.  From insisting that they have grown up since their Infinity Inc. days to Nuklon's attempts to cheer up Obsidian, the pair is full of fun dialogue.  Fire lusting after Nuklon's muscles is another thing all together, though... 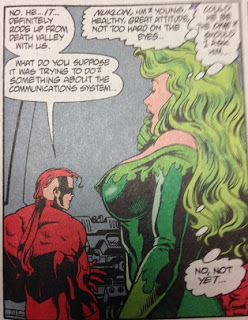 Wojtkiewicz is not somebody I want to see drawing most of these characters, quite honestly.  Don't get me wrong. For the most part he pretty well nails is. Hawkman and Metamorpho especially look great, given what versions they are at this time in comics.  Obsidian looks great, too.  Nuklon and Flash...not so much.  There is one page in particular where Wally looks like he has a near-Kryptonia physique.  His upper-body is huge compared to anywhere else in the book.  I can accept a muscled-up Flash, but not one who can benchpress the Daily Planet building. 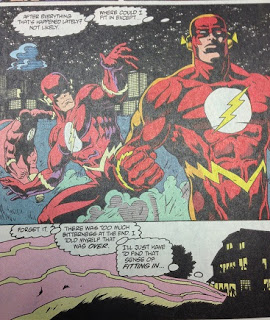 Similarly, Nuklon (who is supposed to be a wall of muscle) looks over-muscled.  His body is too huge for his head.  I get that these are the days way before he became Atom Smasher and they figured out the right proportions, but c'mon!  Reign it in a bit, please. He can be made to look full of muscle without looking like a cartoon.  And who the heck decided that having Nuklon's trademark mohawk be grown out to a ponytail but leaving the sides bald was a good idea?  I get that this was the mid-90s.  I had a ponytail. Lots of guys did.  I don't know of any who grew a mohawk into a ponytail.

So, back in the day I picked this up, read it and then didn't buy any more of this version of the League.  Do I regret it? Nope.  Would I read more about this League now?  Well, I doubt I'd pass them up if I found them for cheap, but I'm not actively seeking them out either.  It's not a terrible group dynamic. The story potential is there and the art, while ludicrous at moments, is acceptable enough to keep with it.  I can honestly see this being a fun set of stories, but I fear it will take a while for it all to find the proper niche. 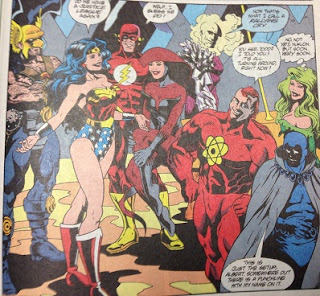 Posted by Clinton Robson at 3:53 AM