SYNOPSIS:  Black Condor heads to Gotham in search of a girl that he believes has run away from home.  While there he proves his naivete as he encounters various Gotham lowlifes.  He inadvertently messes up Batman's investigation and ends up in the middle of mob shenanigans.  Batman does come to Black Condor's aid but Black Condor rushes off as a clue from earlier finally makes sense. He realizes that instead of being picked up by sex traffickers the girl has instead been in the company of a priest this entire time. The young girl is reunited with her family with little-to-no help from Black Condor needed at all.

MY THOUGHTS:  Did you ever pick up an issue that you thought was in the middle of a series just to get a feel for the story and realize you bought the final issue?  Yep, that's my experience here. 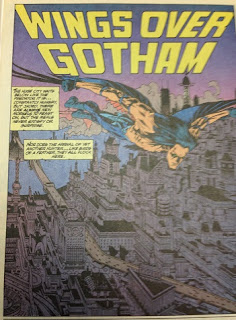 The story itself is good, but not great.  It's also a let down, but not a huge disappointment.  First off, let's look at the cover.  BC and Bats back-to-back with Batman holding what looks like a bazooka.  WHAAAAAAAAT?!  How can you not buy this issue?  Especially since Knightfall was in full swing in the Batman books at the time.  Flipping through it is easy to see this is still Bruce Wayne under the cowl and the story is set before Knightfall begins.  So even more confusion, right?  What makes Bruce Wayne use a bazooka?  Well, you end up finding out it is just a tear gas launcher or some such device.  Still a cool moment, but nothing quite so dramatic as you might be expecting.  OK, big confusion over. 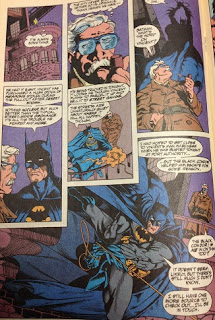 It's Black Condor's book, we should really talk about his story, right?  Augustyn writes a good story.  He penned all of Black Condor's issues (except for those Jurgens Justice League America appearances).  The story flows smoothly and easily.  Condor's powers are somewhat explained without delving into a boring origin recap.  The plot is nice because instead of some big villain with a complex plan it revolves around a basic problem--a girl has run away from home to go live in the big city and her family wants her returned safely.  These are people BC has come to accept as his own friends and family so he is more that eager to help.  His experiences in Gotham City are not unlike the movie Adventures in Babysitting which also deals with a serious plot in a comedic fashion.  Basically, this is a story where the writers and artists knew it was the end of the series and instead of trying to wrap up complicated dangling plots they instead chose to have some fun with simple one-and-done and end on a happy note.

Rags Morales, in this author's opinion, is simply one of DC's best.  His art is always up there with people like Jose Luis Garcia Lopez (praised be his name) and George Perez (no clue what we should say after him but is should be something darn it).  At first glance, if you are unfamiliar with this character, it will look like Condor's arms are way way out of proportion.  This is on purpose.  He has been genetically altered to have avian traits, one of which requires his arms to be long enough to function as wings like a bird's. 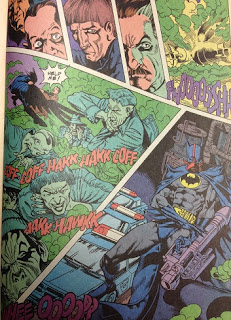 All the characters and backgrounds look great.  Morales does a superb Batman as well. Not everybody can do this, as I'm sure you are all well aware.  I honestly have nothing negative to say about the art in this issue--expressions, bodies, shading...it's all good.

Honestly, with this issue as an example I am surprised this series didn't sell better.  Then again, I was actively buying books at this time and I honestly don't remember seeing it on the racks.  I honestly wonder if it was a direct market book only or what.  For years I only knew of this version of Black Condor from the Jurgens run on Justice League America so I really didn't think he existed outside of that book until I ran across this series in quarter bins a decade or so later.  I have picked up earlier issues and plan to read them.  I feel like DC readers missed out on an original and interesting take on the Black Condor concept. 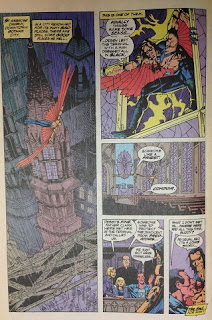 Posted by Clinton Robson at 3:10 AM