SYNOPSIS:  It is a post-apocalyptic world in which they live.  Ocean levels have risen. Animals have become fierce, mutated and unable to be domesticated. Much of the world's technology has ceased to function.  Humanity has regressed to a form of barbarism and most are no longer able to comprehend the concepts needed for advancement.  Admist all the chaos rose a champion--General China. He led the rebellion against the evils of the world...and lost.  Years later, he has become a martyr, a myth, and a symbol for hope. There are some who would take up his cause.  There are others who are only doing what they can to survive and protect those they care for.  This is their story. 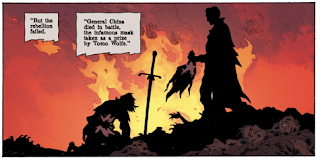 MY THOUGHTS:  OK, before I begin to discuss the plot, I have to establish that this is both what you love and hate about your favorite/hated post-apocalypse stories. It is like the bastard child of Mad Max, Waterworld, Escape from New York and half a dozen others of lesser quality.  As the character Egg Shen said in Big Trouble in Little China, "We take what we want and leave the rest, like your salad bar."  It works, but only if you are willing to accept it from the beginning. 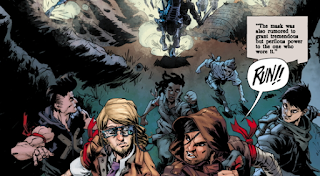 Morello's story starts out, after helping establish setting, focusing on a group of young rebels on the run, apparently in possession of the mask of legendary freedom fighter General China.  Most are killed. The ringleader is taken into custody and another escapes, mask in hand.  This is Simon, who somehow manages to return home to a community that he forcibly left many years before. There he manages to take up with a local valk (whore) named Orchid and her brother Yehzu.  Through a series of events they find themselves on the run from soldiers and elite killers. They encounter an old woman who only saves them from wild beasts because she recognizes General China's mask. Her name is Opal and she grew up with China and has decided to atone for her previous sins by helping the three rescue Simon's friend and hopefully depose the local tyrants.

It's a pretty standard story.  Tom Morello tells it pretty well.  It is definitely a much more adult story, though, looking like it should be more of the line-up on HBO than picked up by CW.  Morello doesn't pull many punches in his presentation and definitely spells everything out as far as sex and violence are concerned.  I did have problems with the fact that there is a lot of jargon to take in within just the first few pages.  Not all of it can be gleaned through context clues, either. The reader has to wait until later on for some things to be explained and this detracts from both the understanding and the enjoyment of the story.

Looking a little deeper, there are aspects of this story that blend in a way one would not expect. General China is essentially a superhero in this setting, but not in the traditional way.  His mask seems to grant him some sort of mysterious powers that aren't quite explained. However, much like Mjolnir in Marvel's Thor, only those who are worthy can use it. An unworthy wearer meets his/her doom through a very painful method that evokes memories of watching Fist of the North Star.  Generally superheroics and mysticism don't function well in  post-apocalyptic settings.  Morello finds a way to make it work, probably because they are presented subtly in favor of showing a rag-tag band of misfits trying to find their way out of their own personal hells. 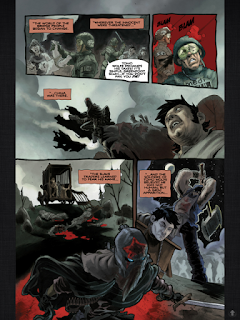 Scott Hepburn's art, for the most part, is quite pretty.  It tells the story of this world very well and reminds me somewhat of the "Tales of the Black Freighter" segments in Watchmen.  It is dark and gritty at moments that it needs to be but also lighthearted and full of joy at other points.  However, Hepburn is not always consistent in his art.  There are panels where Orchid looks like a caricature of herself, appearing to react in cartoonish fashion.

The backgrounds are all great for story detail. The wild animals and the machinery are all nicely detailed.  Then there is the gore.  Scott Hepburn has definitely seen his fair share of slasher films and war movies. It is obvious from the way he presents the more violent scenes.  If you are even the slightest bit squeamish then avoid this. Just giving a fair warning, friends. 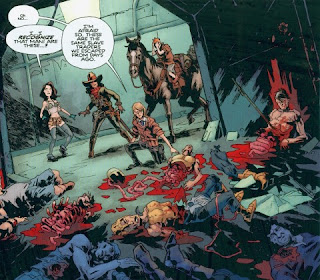 This collection features the first four issues of a twelve issue maxi-series.  If you find it interesting, it's a good thing to know that you really will only need to buy three volumes to collect the entire story.  I found this to be an overall enjoyable read, even if it did go a bit quickly.  There is a definitive learning curve in the first issue or so, but it can be dealt with.  The art is fun to look at, but needs forgiveness in a few areas.  I honestly am skeptical if I would re-read this, though.  Unless you are a huge post-apocalypse enthusiast I would suggest finding a library copy for a test-drive first to see if you really want to invest that much into this story. It's a fun ride, but I'm not entirely sure it is worth the full price of admission.
Posted by Clinton Robson at 3:33 AM