This blog entry is dedicated to the memory of comic artist Murphy Anderson (1926-2015), who passed away in October.  For this special we will be looking at two issues drawn by the amazing Anderson back in the Silver Age:  Showcase #55 and Hawkman #5. 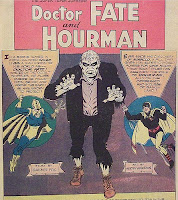 SYNOPSIS:
Solomon Grundy, the man monster of Slaughter Swamp, returns to Earth after having been exiled to space by Green Lantern Alan Scott.  Naturally he seeks revenge against Green Lantern, and after bathing in the radioactive waters of Slaughter Swamp, he goes straight to his task. Doctor Fate receives notice of Grundy's return on his crystal ball, while Hourman decided to investigate the disturbances near his own Tyler Chemical.  Due to the mystical and radioactive nature of Solomon Grundy, Doctor Fate and Hourman cancel out each other's powers when they are both within close proximity of Grundy.  At one point the two powerhouses even are convinced that they are enemies, confused by Grundy's unintentional influence.  The two must come to their senses and figure out a way to work together in order to save Green Lantern from Solomon Grundy's twisted revenge scheme--mutating Alan Scott into a monstrosity like himself! 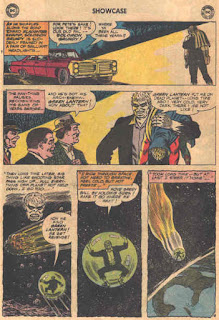 MY THOUGHTS:
OK, looking at the story, this is definitely a Silver Age tale.  The plot beats move along like an episode of Challenge of the Super Friends.  There are crazy things that just totally have to be ignored to allow for the plot. And I am 100% OK with all of that! This story is more fun than we as readers sometimes deserve.

These are the days before continuity became a furious beast with which fans had to wrestle.  This story comes in a nice neat little one-and-done package.  It's not heavy on future ramifications or plot-heavy elements.  It's a fun adventure wherein Doctor Fate and Hourman help out their friend Green Lantern against on of his most dangerous foes.  Gardner Fox moves us from beat to beat in almost a tour guide fashion, but rarely does the plot feel forced.  Solomon Grundy's ability to control the wooden objects around him is strange, but we can forgive it as a method to help incapacitate Alan Scott, whose weakness is wood.  Connecting the toxic and radioactive chemicals in Slaughter Swamp to Tyler Chemical is almost a Roy Thomas level retcon (and raises some serious moral questions regarding Hourman's professional life), but again it serves as a way to bring the characters and plot together.  Really there is nothing more or less awkward here than the same group of teens and their dog always managing to come across people pretending to be ghosts on Scooby-Doo episodes.  If we start to argue over the plot too much, we distance ourselves from the fun of the story.

Before moving on to art, I want to make note of how Fox allowed the reader to help keep track of Hourman's miraclo powers.  There is a small time display at the bottom of several panels allowing us to see just how much time has passed so we know when Rex Tyler's abilities will run out.  Also, this issue answered a question I have had for years--exactly how long between doses of miraclo.  Hourman must wait an hour after his hour of strength before he can take another pill.  Corny? Probably.  Does it work? Heck yes! 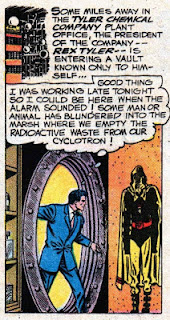 Murphy Anderson's art is nothing short of beautiful to me.  I'm sure by modern standards that this isn't too pleasing to some newer fans.  I personally can't get enough of it.  The man draws some of these characters literally like no other artist does. I have NEVER seen Hourman drawn with his cowl fitting so closely to his head.  All others draw it so loosely that is appears a small gust of wind would rip it away from his face.  Anderson makes it formfitting around the top of his head and face but still leaves the loose folds around his neck.  Hourman has always been a favorite character and this just helps bring out the joy for me.  Anderson just seems like he got Hourman, right down to the costume inconsistencies.

And then there is Grundy.  Oh my!  He is drawn as a combination between Frankenstein's Monster, Lurch from the Addams Family and Jaws from the Bond movies.  Lurch and Jaws would both have appeared relatively recently in pop culture and the movies versions of the Monster is a trope similar to Grundy's entire concept anyway (limited mental ability, brutish behavior, etc.) so these all fit perfectly.

The line work, the effects, it all comes together as a neat package.  I don't mean to leave Doctor Fate and Green Lantern out but there is not much unique about them here.  I will say the monstrous version of GL that emerges from the swamp is exceptionally well done.  There are a few panels where it looks daylight instead of near midnight, but they are also in the city so perhaps ambient lighting?

SYNOPSIS:
Carl Sands, the Shadow Thief, has managed to return once again to plunder the world's treasures.  Hawkman and Hawkgirl must race to stop him.  Sands has not limited his scheme to mere riches, however.  He wants revenge against the two Thanagarian police officers as well as destruction of the entire world. Only he will be safe in a separate dimension from the new Ice Age of Earth!  Can Hawkman and Hawkgirl stop him in time? How can they defeat a foe they can't even touch?


MY THOUGHTS:
I have to admit, I am a bigger fan of Hawkman when he isn't necessarily playing up the Thanagarian thing.  Don't think I am going to rain all over this parade, though.  This was a heck of a fun read.  Hawkman and Hawkgirl are downright fun old-school sci-fi adventurers.  And this is one story that doesn't involve the absorbascon. ;)

I can't say Gardner Fox churned out the best example of his writing in this plot, but it's not bad.  The Ice Age angle feels tacked on, though.  It is never mentioned initially and just suddenly appears near the second half of the story.  Maybe it was a last minute decision to combine to two plots together.  Either way, it works. Just not entirely sure Shadow Thief is the right villain to try pulling it off.

We get reacquainted with Shadow Thief's origin, mostly because it is required for reader unfamiliar with him to fully understand the plot involved since there is so much dimension hopping.

We also get no real shortage of sci-fi weaponry and enough science-type techno-babble to make even the staunchest Doctor Who fan's head spin.  This is pretty standard for the time, though.  Silver Age comics helped bring in a large amount of the science fiction element to comics, and Hawkman was right there in forefront.

Something I never realized about this era is how much Hawkgirl is involved. She is not a sidekick like Robin or Kid Flash. She is 100% a partner in this story.  She was not a policewoman in name only back on Thanagar, and she double proves it on Earth. Many of the ideas that come in handy are hers, not Katar's.  In fact, she saves him after he is knocked unconscious.  Where other comics might put a female character, even heroes, in the prone position, this issue reversed the roles.  A definite plus, especially given the era. 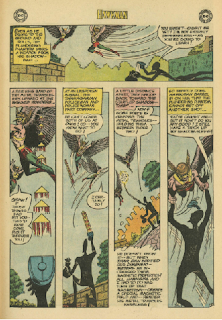 I picked this issue specifically for Anderson's depiction of the Shadow Thief.  How can you draw an all-black figure to appear defined and unique?  I'm not sure, but Murphy Anderson does it!  I'm not sure how to describe it.  There are moments when Shadow Thief actually looks like he is a 2D figure within a 3D world.  Anderson gives off the feel that Shadow Thief twists and folds at times as if he is flexible and not forced into a single form.  Personally there are a few panels that gave me the feeling that he moves around similarly to Judge Doom at the end of Who Framed Roger Rabbit after the steamroller ran over him.

Hawkman and Hawkgirl both look wonderful.  I can all but promise the art here is the basis for Hawkman's appearance in the Super Friends cartoons, except here he is way more detailed.  Hawkgirl...well, let's face it.  She's quite attractive. But not in a cheesecake fashion.  She is drawn more like a Hollywood beauty.  And their wings! Oh, the detail that had to go into drawing individual feathers for both Hawks.

Like the writing, I don't know that this is the perfect example of Anderson's art, but it is still quite high caliber.  The man does not hold back, though.  I am honestly unsure if anybody else can draw Shadow Thief the way he does. 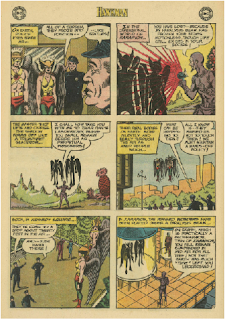 OVERALL:
These are both wonderfully fun books to read.  Neither drags on, nor do they leave you hanging at the end.  I could honestly hang up posters with these versions of most any of the characters involved and be quite happy.  Gardner Fox does his typical Silver Age fun in these stories and Murphy Anderson knocks both stories out of the park with his unparalleled art!  Seek these out, DC fans. I assure you they are worth it.

On a side note, I would like to say that after reading through these, though, I feel doubly saddened at the passing of the great Murphy Anderson.  His art took me away to these worlds and immersed me in the stories.  It brought me new love and enjoyment of characters that were already personal favorites and introduced me to new ways to appreciate concepts that I had at one time dismissed without much thought.  The industry and the fans have all lost a great man, but he shall forever live in on in his artwork and the joy that can be derived from it.