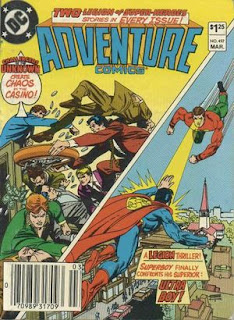 Adventure Comics by this point had become a digest-sized anthology title. This issue in particular relates no less than six--yes six!--stories. In 1982 that would have easily been worth your $1.25, right? It would have been doubly worth it if you loved the Legion of Super-heroes, because as the cover boasts, there are two Legion stories in every issue. The cover art is by Gil Kane and Anthony Tollin.

Aside from the two Legion stories, there are also stories focusing on the Challengers of the Unknown, Aquaman and Mera, the Marvel Family and the Spectre.

SYNOPSIS: The not-yet-Challengers meet up in Las Vegas with an old friend of Red's who has won big at a casino.  However, the casino owner tries everything he can do to not pay this debt--even if it means killing Red's friend.  The Challengers intend to make sure the casino owner pays.

MY THOUGHTS:
OK, first off Red's friend has the last name Green.  I find this to be pretty funny but also pretty annoying.  It's a cute joke but gets old after nine pages.
The story itself is pretty straightforward.  Granted, I had to remind myself of two things while reading it--Challengers stories are not typical superhero stories and this foursome has not exactly become the Challengers yet.  Therefore, we are instead treated to a story of four friends helping out somebody who needs protection just because he won big.  The soon-to-be-Challengers solve Green's problem in what I assume is pretty much standard Challengers methodology, as I haven't really read up on them.  They end up wrecking the casino when the crooked owner won't pay, easily racking up as much in damages as what is owed.  A fun little note for fans is that this story ends with Rocky, Red, Prof and Ace appearing on "Incredible People," the show where they relate their origin.

Overall it is a fun read, but not really my preferred type of story.  Rozakis does an excellent job moving the plot along, so no real complaints unless you are specifically wanting the Challengers to deal with the Unknown instead.

Toth totally sells it with the art.  It is beautiful.  He does an excellent job of making each of the Challengers appear unique, while all the backgrounds and such are just wonderful to look at.

SYNOPSIS:  A young man from the future is causing problems for Superboy.  It appears this Ultra-Boy has vision powers similar to Clark's.  Can Superboy stop Ultra-Boy? And what exactly is his true purpose?

MY THOUGHTS:
Jo Nah has to come back and discover Superboy's identity before he can get into the Legion?  Are there no historical records? No Superboy museum?  Eh, maybe I'm just being picky.  This really isn't a bad story.  Corny and very Silver Age, yes.  But still fun.  Ultra Boy (at this point hyphenated as Ultra-Boy) only demonstrates his vision powers in this story, while later on he essentially has all of Superboy's abilities, but can only use one at a time.

Siegel pretty well knew what he wanted to do with Superboy and the Legion at this time, so even though potential Legionnaires messing around with Clark was pretty much a standard plot of the time, he still managed to make each encounter different simply through the characters' abilities.  As I said, it's definitely a Silver Age story.  There are wildly impossible things, like the coin that Pete Ross gets that should allow him to travel to the 30th century, but if you love and understand Silver Age stories you instantly forgive such silliness and just enjoy the story.

Curt Swan sure can draw Superboy!  No complaints here on any of it.  I have always enjoyed the way Clark Kent looks in the Superboy stories, so this one certainly doesn't disappoint.

SYNOPSIS:  Trouble is brewing in Atlantis, but Aquaman and Mera are nowhere to be found!  Instead, they are recovering from a recent attack while Mera attempts to make sense of the events of the last several hours.

MY THOUGHTS:
This story.  I'm honestly sad I came into it in the middle.  Even with the recaps, you really only get just enough information to help you get a vague idea of what is going on.  It's not hard to follow, but you feel a little out of the loop, almost like somebody trying to explain an inside joke shared between two friends to a third friend who is unfamiliar with the joke.  Skeates is writing a really fun and interesting story about an uprising in Atlantis and Aquaman and Mera being kept away from the political upheaval.  It's just the exact opposite of the one-and-done stories that appear in this issue.  Granted the Challengers story was the end of a two-parter but even then you got the feeling that it could be read solo and still work.  This...just feels out of place.  However, it is extremely well done for what it is and leaves the reader hungry for more.

The art is simply pure wonderful Aparo.  I object to the way Mera looks on that first splash page.  Her expression is simply too comical for my taste.  It's not meant to come across that way, but it does.  If you can manage to just turn the page, you will be treated to Aquaman and Mera by a man who knows how to draw them in amazing detail.

SYNOPSIS:  Black Adam is returning to Earth after a 5,000 year journey through space.  He is eager for revenge against the wizard Shazam.  Will the combined might of the Marvel Family be enough to stop him?

MY THOUGHTS:
This is mostly an excuse for Binder to recount the origins of the various Marvels.  Nothing wrong with that. It is great for newer readers to be able to understand what is going on.  However, it takes up a lot of the space in the story.  Plus, a personal quibble I had with the story comes form the wizard Shazam.  The wizard is crushed by a rock during Billy's origin and can reappear in a ghostly form if summoned.  But Shazam is also the one narrating the story by chiseling it into the Rock of Eternity.  I realize continuity isn't a big deal in Golden Age stories like this, but really?

The highlight of the story, aside from the arrival of Black Adam, is that the powerless Uncle Marvel actually tricks Black Adam into saying SHAZAM and thereby transforming back into Teth-Adam.  Being 5,000 years old, Teth-Adam crumbles to dust almost instantly.  Pretty dark for a fun kids' book from back in the day.  Also fairly short-sighted as Black Adam proved to be highly popular and would return again and again.

Beck's art is always beautiful.  Keep in mind this is a reprint from 1940, so it is very much Golden Age art.  However, even with those "failings" it still comes across as good art.  I'm a sucker for Golden Age comics, especially when it comes to the art regardless of its simplicity.  Captain Marvel stories in particular are great examples of the art of that era and this gives you an grand view of the entire Marvel Family, plus Black Adam.  If you are even a mild fan this is worth more than a cursory look.

SYNOPSIS:  A masked figure appears to challenge Superboy and the Legion members.  He is able to negate their attacks against him with ease.  Who is this masked man and what hope does the LSH have against a foe who has a way of eliminating even the mighty Superboy?

MY THOUGHTS:
The man behind the mask is a Lex Luthor robot!  Who would have guessed?  Well, probably everybody but me.  I was actually hoping for a way-too-early appearance of Ferro Lad.  Hopes shot down quickly, I suppose.

This is the first "team feature" of the Legion.  Granted during their first appearance they were shown as a team, but this is the first time they actually get to take on a threat together as a team. Also this is the first feature listed as "Tales of the Legion of Super-Heroes" as opposed to just being a Superboy story.  As with the above Legion/Superboy story, you have to accept a few Silver Age corny moments.  The robot is filled with tapes (how computerized information was transferred in those days, kiddies) that are all loaded with hate for Superboy and his friends.  Just accept that the robot is programmed to get revenge on Superboy.  Trust me, it's easier that way.  Superboy eventually comes up with the idea to free Mon-El from the Phantom Zone long enough to help defeat the robot as it does not know of Mon-El and therefore has no programmed way to combat him.  However, the robot's lead mask makes Mon-El's lead poisoning worsen and he has to return to the Phantom Zone (at least until Brainiac 5 creates an antidote and they bring him out a little later on).

Everything I said above about the art applies here as well.  It's nice to see the early days of the LSH, especially Mon-El.

SYNOPSIS:  An evil entity takes possession of an innocent boy.  As the Spectre and Jim Corrigan investigate it becomes apparent that it is impossible to attack the entity without harming the child.  The two must discover a way to intervene or else the entire world may soon be destroyed.

MY THOUGHTS:
I have to admit, I am pretty unfamiliar with Spectre stories of this era. After asking around, this is apparently pretty standard for an adventure from this time, especially from Neal Adams.  I am used to Adams as artist on Batman, so this is definitely both a treat and divergence from what I am familiar with.

The story itself actually feels a little too long.  Not to say this is a bad story, but it could have been condensed and not lost anything aside from more panels for Adams to draw.  The way that the Spectre figures out how to stop the entity is pretty clever, though.  By choosing not to destroy an innocent life he proves that goodness can triumph over evil.  It's a traditional plot, but certainly well done and presented in a relatively original way.

Adams's art is exactly what you would expect from him.  It is clean and clear and downright pretty.  I'm not sure what else to say about it.  It is simply (and I say simply in the loosest terms) standard Neal Adams. My only regret is that I much prefer Neal Adams drawing Denny O'Neil's scripts instead of his own.

OVERALL:
I have absolutely no qualms about telling you I paid a grand total of $2 for this issue.  It is easily worth well more.  As Prof. Alan Quarterbin of the Quarterbin Podcast would break it down, six stories at a total of $2 breaks down into just over 33 cents per story.  However, this is a 100 page digest.  That's 2 cents per page! This was a steal!!!

OK, enough bragging.  This is a wonderful book.  The stories prevent a great variety to help introduce one to the DC Universe's available characters and story selection.  Not only that, but a reader also gets presented with stories spanning the Golden, Silver and Bronze Ages. It is wonderful to see how story and art styles evolve, even between the two Legion stories.

If you ever come across this or other digest-sized issues of Adventure Comics, I highly suggest picking one up.  I highly doubt you will be disappointed.

Front and back covers together.

Posted by Clinton Robson at 4:07 AM