SYNOPSIS:  Our story opens with April O'Neil, award-winning news reporter and friend to our heroes the Ninja Turtles, in shocked disbelief. She has just been fired from her job.  It appears that her many adventures with her friends the Turtles have caused her to be absent from her job a lot lately, so much so that it has caught up to her and her boss has had enough.  April attempts to explain the situation but, upon taking a quick look at her shabby appearance, she quickly begins to understand her boss boss's position.  However, this doesn't calm her much as she storms out of his office, slamming the door and breaking the glass in the process. 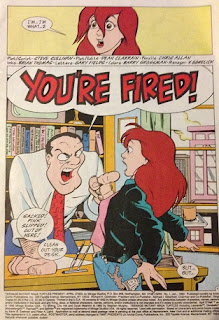 As she cleans out her office, April's coworkers show support.  They are all genuinely upset at her leaving, and April herself sheds a few tears as she leaves.

On the subway, April thinks back to the events from earlier in the day.  She had just returned home from Japan with friends who had all gone on a whirlwind adventure with the Turtles. Along they way they picked up a new friend, Oyuki, who had been a punk on the streets but has come to America to live with April. April kissed her friend/love interest Chu goodbye and she and Oyuki head to their apartment, which shows obvious signs of having been unoccupied for several weeks.  April's answering machine had been filled with messages from her boss demanding she make an appearance. 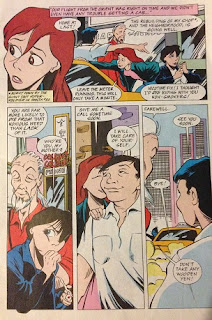 On the subway on her way to the office, there is a sudden power loss. Instants later a group of ninjas with some sort of glowing weapons burst through the roof.  A man in a jacket who appears to be part of an organization, as his friends also have matching jackets, yells that it is a trap by the Dog Star Gang. 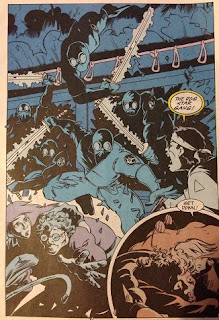 The Dog Stars toss a smoke pellet as the men in jackets pull guns.  The smoke bomb has a second effect--slowing down those not in possession of one of the glowing weapons. The Golden Triangle, as we learnt he jacketed men are called, seem to stand no chance. April does her best to shove an old woman to safety. As she does, a stray shuriken lands in the wall beside her. She grabs it and does her best to use what small amount of training Splinter has given her.  The shuriken finds its mark in a Dog Star's arm just before landing a killing blow to a Golden Triangle member, causing him to drop his sword. 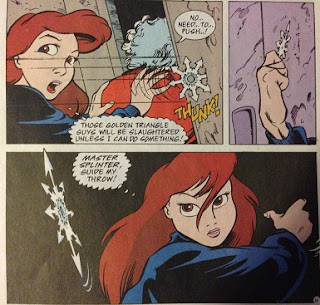 April struggles to make her way to the katana, but as soon as she grabs hold he can once again move freely and instantly joins the fray.  The Golden Triangles figure out that the weapons allow free movement and do their best to take them from some of their enemies, quickly evening the odds.  The Dog Stars take the opportunity to throw a flash grenade and vanish in true ninja style. 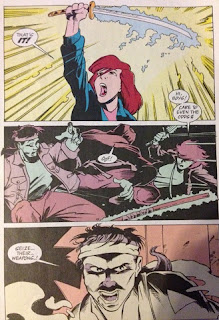 After the battle, April accuses the Golden Triangles of being just another gang of punks in Chinatown.  The Golden Triangles refute this claim, saying they protect Chinatown from other gangs, despite admitting they collect protection money from Chinatown's residents.  The remaining members gather up what weapons they can, including April's, and rush away before the police can show up.

April manages to finally make in in to see her boss, leading to our opening scene.

April returns to her apartment where Oyuki, a bit of a chainsmoker who has been chided by April more than once for her bad habit, is sitting on the sofa watching tv and trying her best to hide the lit cigarette as April walks in.  She attempts to distract April, mentioning their friend Tattoo the sumo wrestler and his dog Inky are on TV.  April gets mad over Oyuki's cigarette, but realizes it's misplaced anger and explains her situation.  Oyuki offers to take up stealing again to make ends meet, but April has a better idea.  She and Oyuki will take her old camera out and become freelance reporters. Their first investigation--the Chinatown gang war. 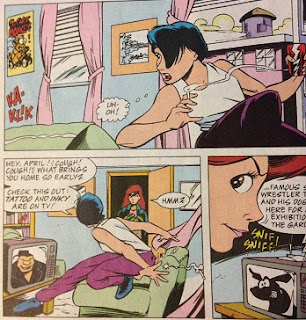 Elsewhere, the Golden Triangle member from the subway approaches his master.  He tells of the day's events and offers the weapons to his master.  The master (who in later issues is revealed to be named Johnny Yen) takes the weapons and says he will have to handle things personally. 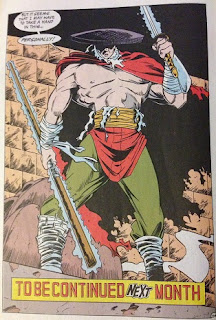 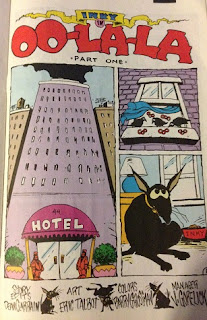 SYNOPSIS:  In a hotel in NYC Inky the dog has been left alone by his owner Tattoo.  Inky decides to not be a good dog, but instead attacks many things in the apartment--knee pads, a magazine, Tattoo's luggage, etc.  He chows down on dog food, drinks from the toilet, and wallows in the mess he has made. 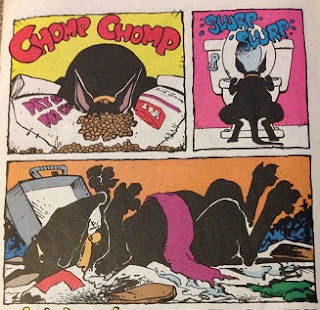 Catching an unknown scent from outside, Inky goes to an open window. He howls into the void, which startles nearby birds. The scattering birds cause Inky to lose his balance and we are left with the cliffhanger of Inky falling out of the window to the street below.

MY THOUGHTS:  Personally, I find this issue incredibly enjoyable.  It is the first part of a three-issue mini-series.  If this seems entirely unlike any Teenage Mutant Ninja Turtles story you are familiar with, then perhaps a little background is needed.

This is a spin-off from the Teenage Mutant Ninja Turtles Adventures comic book series from Archie Comics. "But TMNT was put out by Mirage" you might be yelling at your screen. And you are right. But TMNTA was different.  It was a much more kid-friendly book put out in color vs Mirage's B&W books. And on top of that, TMNTA has an entirely different continuity. It began as adaptations of the first season or so of the 1987 cartoon series.  Starting around issue 5 of the ongoing series the writers took these characters in their own unique directions, incorporating characters from the cartoon an toy line in different ways than they had been previously presented (such as April wishing to learn martial arts skills), similar to the way Larry Hama wrote G.I. Joe for Marvel.  By the teens and twenties, issues of TMNTA featured entirely original characters, eventually delving into concepts that have been adapted into the more recent TMNT ongoing series published today, although only tangentially related.

Before this spin-off mini, the Turtles and crew had been to Japan, fought a dog creature known as Chien Khan, acquired a new friend in the female fox Ninjara, and ended up fighting a demon.  It's actually a pretty drawn out story with seeds beginning in TMNTA #20 but really coming to a head in issues 28-31.  This leads the non-human characters on a bit of a world tour (and beyond) while the humans returned to America to try to return to normal lives.  Obviously that wasn't the case, as this story shows.

Anyway, with all that behind us, I hope things make a little more sense.  Being an Archie Comics group book, this is obviously a quick and easy read.  However, the story is still just as engaging as a book written for a slightly older audience.  Despite being overly kid-friendly, it feels more like a YA novel.  April comes across as a competent and strong female lead. He love life is only barely an issue in the story, instead focusing more on her relationship with the overall cast and the way she can competently handle herself in a crisis.  April displays a sense of adventure similar to her cartoon counterpart of the era, but instead of becoming the victim of yet another kidnapping she can save herself without nearly so much drama.

The art is pretty simple and cartoonish. This might drive off the more serious reader, but as the book was meant to appeal to kids this is perfectly acceptable.  It's actually pretty enjoyable once you get used to it.  Simple does not mean badly drawn.  It is easy on the eyes without complicated details, but still flows in a way that doesn't let readers get bored or annoyed.  There are still many details in the panels for readers to pick up on.

The backup story is pretty cute.  Inky is a dog and behaves as such.  It's pretty cliche, but still cute and fun.  Think of it as a quick 90 second cartoon filler if the episode ran short.  I know I'd be willing to watch a 4-5 minute long Inky cartoon based on this whole adventure.

Overall, no, nobody's life will be changed by this issue. It won't shatter your perceptions of reality or become the ultimate collectible.  Honestly, this issue is just fun comic reading for the sake of being fun comic reading.  I lament only having the first two issues.  There was a second April mini called The May East Saga in which she goes on another adventure, so obviously there was a market.  With any luck, somewhere along the line of all the random collections of Turtles stories we can see these two April series collected for the world to enjoy.  If you see them, pick them up. They will be quick reads, but worth every second, I promise. 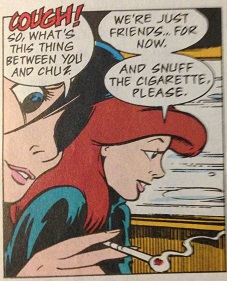 Posted by Clinton Robson at 4:43 AM