SYNOPSIS:  We open with an unknown narrator saying how he often thinks of the new android Hourman, despite having not yet met him. He reminds us that Hourman is now part of the Justice League and that he comes from many thousands of years in the future. 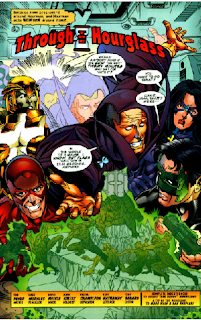 In the JLA Watchtower, we see Hourman interrupt Green Lantern and Flash in the middle of a game Kyle has created with his ring. Hourman asks the two, as well as Huntress and Zauriel if they can just skip ahead 20 minutes.  He then goes on to explain exactly how the game will end, what will be said amongst the heroes and where their conversations will eventually lead them, all the while getting Kyle in trouble for things that he hasn't technically said yet.  The group decides that Hourman might benefit from more social interaction (i.e. dating) and they go with Hourman to consult the foremost expert on the subject.

They arrive at a junkyard where Hourman tells them the dating expert is in serious trouble. Smashing through an old mirror, they enter the hideout of the Mad Hatter who has none other than Batman trapped in yet another deadly device.  The android easily frees Batman and de-ages the Mad Hatter and his goons.  Batman wastes no time in chiding Hourman for ruining his escape plans and orders the android in no uncertain terms to return the villains to their proper ages. Hourman complies and Batman shows exactly why he is Batman. Zauriel mentions that Batman, in his own way, is imparting his experience. Hourman uses his time vision to view all of Batman's past experience, because he is an android and doesn't quite understand things the same way humans do.  Doing this convinces Hourman he now knows what to do and vanishes, leaving Kyle and Wally to explain to Batman exactly what is going on. 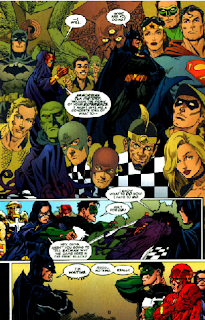 We are shown a small cafe as we return to what our unknown narrator tells us.  The page quickly reveals the narrator to be none other than Lucas "Snapper" Carr, former mascot for the Justice League.  Hourman and the other JLA members (minus Batman) appear and surprise him.  He says they are early, to which Hourman explains they skipped 20 minutes. Snapper fully understands while the others are still slightly confused.  Snapper and Hourman leave the others and have a heart to heart talk on the way back to Snapper's home.

Snapper gives Hourman a piece of the original Amazo android, who is more or less Hourman's earliest ancestor.  Hourman, in an effort to discuss free will versus programming, uses his time powers to bring Amazo to the present.  Amazo begins attacking Hourman and becomes even more enraged when he recognizes Snapper.  Hourman sends Amazo back into the timestream only for Amazo to reappear moments later, but changed.  Amazo has had enough exposure to Hourman to be able to duplicate a portion of his time powers. "Do you know what half of infinite power is?" the newly christened Timazo ask. (Timazo, by the way, is a portmanteau of time and Amazo, hence it is not said as "Tim-azo" but rather "Time-azo." Just clarifying.) 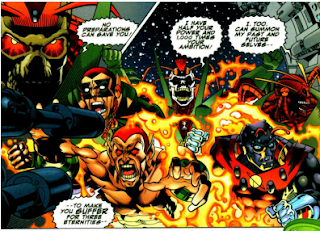 Outside of Snapper's home, a young woman by the name of Beth is approaching. Snapper had asked her to come over and meet his new friend Tyler (Hourman). A stray chronal energy blast hits her and de-ages her to an infant.  She toddles off, wandering down the road aimlessly. 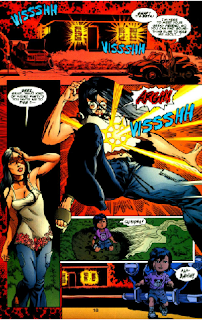 Inside, Timazo screams about how he hates humanity, especially for giving him life.  Hourman vanishes into time and reappears behind Timazo. The two then travel to the future, where Hourman has used his powers and abilities to prepare for the battle. Timazo tries to bring variations of himself throughout time to the battle, but Hourman returns himself and Timazo back to Snapper's home, but the battle is quickly over as Hourman has rewritten time to remove Amazo from ever existing.

Snapper convinces Hourman to remove his omnipotence, which he does. Tyler leaves himself a few time powers, but takes his godhood down to only superhero levels.  The process drains him and causes him to need to rest and recover.  Together, Hourman and Snapper look forward to what the new day will bring and the reader sees Beth walking into oncoming traffic. 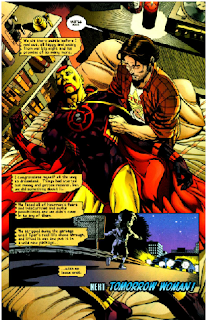 MY THOUGHTS: OK, so first thing's first, I guess.  If you aren't familiar with this version of Hourman, he first appears during the DC One Million storyline.  So, if you were reading comics when this was initially released and you either didn't know or didn't care for that story, you most likely had no clue who this guy was nor any interest in picking up this comic.  Even slight familiarity with him from the pages of JLA might not have been enough.

As for me, I read this for the first time this year.  I was never a huge fan of the android Hourman, preferring both Rex and Rick Tyler.  However, this issue has turned me around slightly.  Peyer, who I am not overly familiar with, does an excellent job of bringing my attention to the comic and keeping it there.  Granted, I pretty much guessed the narrator was Snapper Carr by the end of the first page, but I have been known to be wrong many times before.  Snapper as the narrator and main supporting character makes a lot of sense, despite what many of you many be screaming at your screens.  Snapper, despite his decades of annoyance, has been a relatively consistent "human" link for the Justice League members.  Think of him as something of a reality check to keep them from losing touch with the common people.

With this in mind, Snapper serves as the counterbalance to Hourman's near-godlike existence.  They both have a certain innocence about them--an ability to experience wonder as if through the eyes of a child.  The main difference is Hourman sees no risk, no consequence, no faux pas to his actions and always assumes things can be fixed.  It is part of what Snapper uses to convince Hourman to reject his godhood and experience existence as a mortal.  How else can he learn and grow? 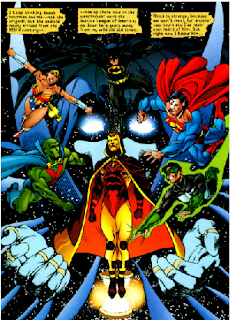 As any reader of this blog knows, I absolutely LOVE Rags Morales's art.  This is a fact.  Even here, despite what quibbles I may have.  Morales, instead of going with statuesque superheroes, draws the characters in more of a cartoonish style.  There is a reason for this.  This is a tale of innocence and growth.  Hourman sees the world differently than the other heroes, so perhaps we are seeing the characters more akin to how he is seeing them.

Also, Morales seems to be aping the style seen in the pages of JLA at the time.  Those were not always the traditional superhero style either.  In fact, both JLA and Young Justice were known to show exaggerated and almost cartoonish art during those days, so it was not as uncommon as one might believe.  Either way, while it might take a few pages to get used to, the art works for this story.

The colors are easy on the eyes, yet still bright and vibrant.  No complaints.

I can't say I am particularly a fan of the Timazo look, but since this seems to be a one time thing, I can pretty easily overlook it.

Overall, this issue is almost exactly what a #1 should be. Granted, readers are partially thrown in needing prior knowledge of things, but for the most part that gets cleared up within a few pages.  The background isn't as important as what lies ahead.  Tyler's quest for humanity really hooked me by the end of the issue and I am curious to see what happens to Beth and how long before Snapper and Tyler figure out what happened and how to undo it.

I'm not sure if this series had a print run as widespread as something like JLA, but surely there are still copies of this floating around back issue bins out there.  If you are interested in time travel, character growth or are just the random Snapper Carr fanboy, I say snatch this issue up.

Posted by Clinton Robson at 5:38 AM