This week, my coffee comrades, we take a look at some team-up adventures of Ted Kord and Vic Sage, aka Blue Beetle and the Question!  A Twitter poll was posted to ask which era to examine, Charlton or DC. The results came out dead even so looks like we get to compare the two. What a treat!  So, without further ado, I give you CHARLTON BULLSEYE #1 and BLUE BEETLE #5!


SYNOPSIS: TV news reporter Vic Sage is on his way to a breaking news story. A gang of criminals with high-power weaponry is robbing a high-end store. As the criminals attempt to make their escape, Blue Beetle swings down knocking some of them for a loop. Beetle makes quick work of many of the remaining criminals by using his incredible gymnastic abilities.  Meanwhile, Vic Sage ducks away in order to change into The Question.  He emerges just in time to help Blue Beetle against the criminals and their weapons.  However, the robbery was just a distraction to keep Beetle busy while they steal the Bug, Blue Beetle's high-tech ship that was left hovering above the scene. 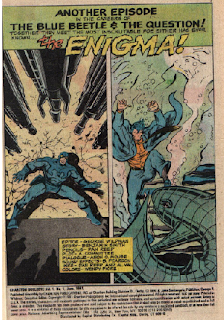 Meanwhile, readers get a glimpse of a criminal known as The Enigma, the mastermind behind the theft of the Bug. He monologues about how Blue Beetle sent him to prison and now he is out for revenge.

Later, Ted and Vic have tracked the Bug to a building south of town.  Entering, the pair are confronted with nefarious booby traps.  Suddenly the two get separated--Question being attacked by a mechanical shark and Beetle nearly being gunned down.  Escaping their own personal deathtraps, the two meet back up and find the Bug. However, they aren't alone. Guarding it is a man who has been scientifically altered to be a giant.  Question distracts the giant long enough for Beetle to climb inside the Bug and shock the giant unconcious, draining the Bug's electrical systems in the process. 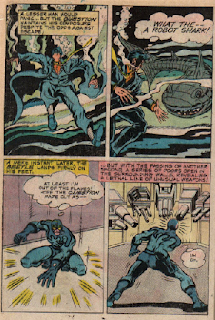 Enigma sends the rest of his goons against our heroes, but they quickly fall before the powerful pair.  Enigma then resolves to finish them himself.  He focuses on Question first, but Beetle jumps in and disarms Enigma before he can do any real damage. Enigma runs off, intent on blowing up his base and all of them with it. Ted and Vic barely have enough time to jump aboard the Bug, tap into emergency power and escape the building before it explodes.  The two comment that they make a decent team and that if Enigma somehow survived they may need to team up again. 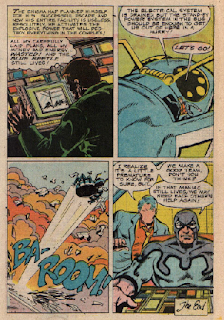 MY THOUGHTS:  This honestly feels like a Silver Age or even early Bronze Age story that was written in the early 80's.  The story is mostly a series of action beats with little to nothing happening otherwise.  This is not necessarily a terrible thing, but with the way Smith and Reed have the story laid out there just aren't enough pages to fit this story properly.  It really feels like the story could have benefited from an additional 6-8 pages in order to let the story expand and show the action more.

Another complaint is that the plot moves along just because the plot demands it.  Logic doesn't really apply and character development is nil.  In fact, Ted and Vic never really talk to each other about anything aside from the plot.

The art is actually pretty decent.  It's corny in places, for example the faces of the criminals at the first or the giant guarding the Bug.  But really, overall, this is a story that is very pleasing to look at.  Blue Beetle and the Question both look pretty neat, but they aren't incredibly outstanding.  Just about average. 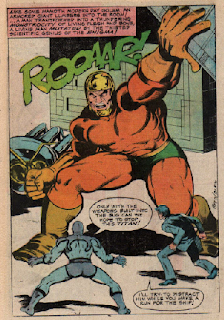 Overall this is a fun story and a neat time capsule for a pre-DC set of characters that only two years later would be part of DC's properties.  I'm not necessarily saying to actively seek it out, but if you came across this randomly it might be worth the read. 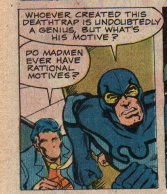 
SYNOPSIS:  At World-Wide Broadcasting, reporter Vic Sage is trying desperately to expose the identity of Blue Beetle.  His station manager informs Vic that he has been assigned to cover a series of thefts committed by youth gangs in the city. Vic thinks that it may be time for the Question to find some answers. 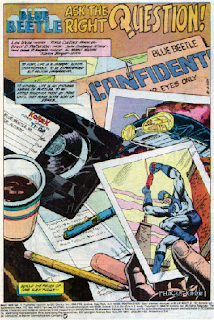 Meanwhile, elsewhere (a scene set by using the opening lines of the song "Bad, Bad Leroy Brown"), punks and their mysterious benefactor are causing problems for Chicago's finest.  Blue Beetle happens to be patrolling overhead in his Bug and tries to apprehend the criminals.  Their benefactor, The Big M, provides a distraction that allows the punks to escape.  Annoyed, Beetle returns to his headquarters.

At another location, we see a stereotypical mob boss who is upset over Marone moving in on his family's territory. He tells his son Richie to find out what is happening and to take care of it.

At a small diner, Vic gains information about an upcoming meeting of all the local gangs, including the mysterious man who has been helping various gangs in the city.  Vic decides that it may be time to investigate firsthand as the Question.

Back at his headquarters, Ted thinks about recent events in his life, how he promised the former Blue Beetle Dan Garrett that he's uphold the name, and how he feels ashamed that unpowered punks have managed to beat him even after he has dealt with the likes of Dr. Alchemy.

At police headquarters, Lt. Fisher expounds upon a subplot about connecting Ted Kord to Dan Garrett's death, but gets derailed by actual police business.

Ted and his girlfriend discuss events, elaborate a little bit on subplots involving Ted's father and such. After a bit, Ted excuses himself and heads out into the night as Blue Beetle.  He comes across a punk and manages to get information out of him.

Elsewhere, Vic Sage applies his mask and releases the gas which no only adhere the mask to his face but apparently also changes the colors of his outfit.  The Question comes across guards outside the meeting, but quickly takes them out with a combination of a gas distraction and some well-placed punches.  Nearly leaping over the fence, Question launches himself into the junkyard that serves as the meeting place for the gangs.  The assault him en masse.  Vic holds his own for a few moments, but is quickly overcome.  Just then, Blue Beetle swings in, knocking the punks away from Vic.  The two, quickly realizing they are there for similar purposes, make quick work of the punks. 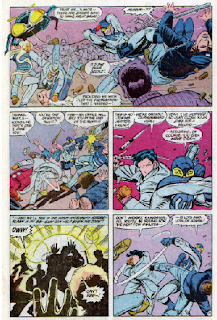 Just as the two heroes are about to get some answers a rocket is launched toward them.  The explosion provides enough distraction to allow the gang members to escape, proclaiming that The Big M has come through for them yet again.  Our heroes decide to keep working together on the case with the first order of business to be determining just who Big M is.  On a rooftop nearby a costumed figure hold a bazooka and thinks to himself that nobody will be able to stop The Muse.

To be continued next issue. 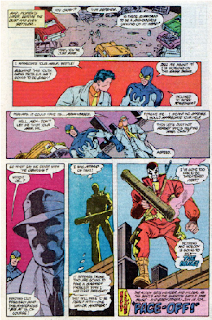 MY THOUGHTS:  This issue is incredibly well-written and drawn to match.  This is a prime example of DC in the mid-80s, especially when looking at a DCU following the events of Crisis on Infinite Earths.  Wein knows his stuff, folks, but isn't the perfect author.

It's hard to really find things to discuss about this story. It honestly seems to borrow a lot from the Charlton version of Beetle ad Question meeting.  Whether these were used as homage or are just coincidence is unknown to this author, but it seems to work.  This time the story has been slowed down both to allow for subplots that at work within the Blue Beetle ongoing series at the time as well as to allow to multiple issues to showcase the full story.  If anything, the pacing might have been slightly too slow to lead up the Muse's reveal.  The mafia subplot and Lt Fisher's quest both felt a bit forced when seeing this issue alone, but they both probably fit pretty well in the overall ongoing series.  Without reading the others I honestly have no way of knowing. 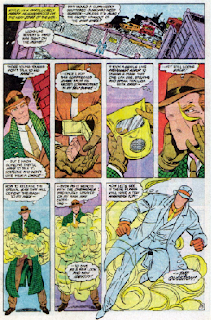 The art is downright beautiful.  Cullins and D'Angelo make these characters come alive.  Blue Beetle and the Question might not have ever looked better this side of the original Steve Ditko designs.  The action scenes look action packed!  The transformation into the Question is just beautiful to look at, even without the story.  Trust me, the art trumps the story (and we're talking legendary Len Wein on story here).  If nothing else, snag this book for the pretty, pretty pictures.

Overall, yes this book has its flaws (goodness, who designed Muse's look?), but it outshines many other books of its day.  Absolutely worth seeking out.

The main differences seem to be, art aside, the setting and motivations (or lack thereof) of the characters.  The Charlton story is set in Hub City and the DC book is set in Chicago.  I find this a little funny since DC is known for fictional cities but instead they opted to use a real one.  Didn't fly too well for Justice League when they moved to Detroit, but I guess DC decided it might work better for a solo hero like Beetle.

The Charlton book gives zero motivation to the heroes to team up other than they were in the same place at the same time.  The DC book pretty much comes to the same conclusion, but the majority of the issue is spent getting there with the characters exploring things and using their personalities to get them there.

There are similarities to Blue Beetle and Watchmen's Nite-Owl, which is natural since Nite-Owl is a pastiche of the Charlton Blue Beetle.  However, I just assumed the DC version of Ted was a little more different from Nite-Owl than that.  The location of the headquarters, the discussion with the loved one and even the way he and the Question (Rorschach in Watchmen) team up to fight criminals.  Kind of interesting, really.

OK, so in the end do I prefer one over the other? Not really.  They are both fun for different reasons.  The DC book is easily better written and better drawn, but the Charlton one is a nice call back to a simpler time.  So buy whichever one (or both) appeal to you more, if you are seeking some Beetle/Question fun.  Hopefully these stories will satisfy your cravings.