This week we have a special treat. Darrin and Ruth of the outstanding podcasts Warlord Worlds and Trekker Talk have been kind enough to do a review of an issue that is right up their alley.  To coincide with the coming of Spring, this blog welcomes new thoughts to a green topic.  Without further ado, I give you the Sutherlands' review of the 50th anniversary spectacular that was Green Arrow Annual #4.

Summary
The story opens with Oliver Queen and Dinah Lance driving a convertible thru Nottingham in the UK. They are there to see the sights and do some genealogy research. Oliver booked a suite in a hotel that was converted from an original 11th century building complete with antique furniture and portraits including a picture of Marian with her hand covering her neck.

While Oliver is conducting research at a library, Dinah goes shopping. As she walks past an antiques shop an unusual necklace on display catches her attention and she buys it.  When she returns to her suite she starts to put the necklace around her neck. A wave of dizziness overcomes her and she is then transported back in time to the 11th century arriving with long hair, an appropriate dress for the time, and still wearing the necklace from the antiques shop.

As the story unfolds we learn she is Marian and she soon encounters Robin Hood, who of course looks just like Green Arrow, and she is introduced to the Merry Men in Sherwood Forest.

A Black Alchemist is using evil powers to poison the water across the lands. He is supported by the Great Battle Queen Ariana who wants the Normans and Saxons to vanish and leave the land to the Celts.

The forest god Herne the Hunter is seen and Ellen, the Guardian of the Wells and Sacred Pathways, reveals herself to Robin and Marian and explains what must be done to stop the poison and prevent death and destruction from spreading across the land.

Marian/Dinah finds and removes the source of the poison which is a cursed dagger that has been placed in a nearby well.

During one of many skirmishes, the Battle Queen Ariana notices the unique necklace worn by Marian and tells her it is a  Priestess' talisman and captures her, planning to sacrifice her in a well to revive the poisoning curse.

The Guardian Ellen alerts Robin Hood and he and his band go to attempt a rescue. As Marian struggles with the Battle Queen the two tumble into the well. As she falls, Marian pulls off the necklace which returns her back to modern times.

When Oliver returns, Dinah is confused that she can’t find the necklace she just bought, but we see that the portrait of Marian has changed. The hand covering her neck has moved and the necklace from the antiques shop can been seen around her neck.

Later, as the two walk down the street by the same antiques shop an image of the Battle Queen can be seen reflected in the window.

Our Thoughts
The issue features a terrific cover by the always amazing Mike Grell with Green Arrow (Robin Hood) and Black Canary (Marian) on a spiral staircase. Golden light is streaming through the large window behind them. The image is framed with a decorative braid effect that suggests a Celtic theme.

In addition to the excellent cover, there is also a nice two-page title splash by issue artist Shea Anton Pensa of a fierce battle that is very reminiscent of the two-page title spreads Mike Grell would draw for his Warlord series.

This is a nice story idea and is ideal for an annual. It's an extra-long story that has room to breathe, but doesn't feel stretched out. The timeline of the story is ambiguous so it is easy to pick-up and read at most any point in Mike Grell's Green Arrow series.

It was nice to think of Oliver researching his personal history and fun to have him imagine he might be connected to the Robin Hood legend.

We really enjoyed seeing Oliver and Dinah in Nottingham. For anyone who loves Robin Hood tales, the city seems magical, a place to explore history and to find connections to the legends. 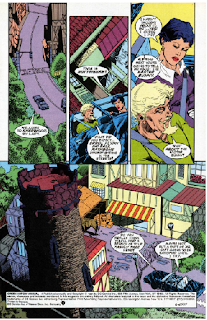 We would have liked a few more pages of the couple exploring sights from the Robin Hood legend including the Major Oak in Sherwood Forest which is so old it was there at the time of Robin Hood, the location of Nottingham Castle, the church where legend says Robin and Marian were married, and the statue of Robin Hood in Nottingham. We had the pleasure to visit Sherwood Forest and Nottingham a few years ago and those were certainly highlights of our trip.

Fantasy Elements
The issue is a departure from the "realistic" Green Arrow books of the day with the storyline of Dinah being transported back in time. It has a bit of the feel of a gothic romance adventure story like those in a Hammer Horror film or the gothic romance comics of the past. It can be taken as a nice fantasy side-story or as Dinah's dream, whichever way the reader wants to interpret it.

Being published in the early 1990s, the story includes many elements of the popular Robin of Sherwood television series of the mid-1980s that intertwined the Robin Hood legend with many fantasy elements including Herne the Hunter. In the comic, Robin even calls himself the son of the Great Forest God Herne. 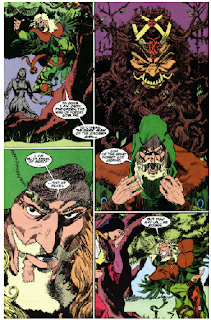 Another great thing about the Robin of Sherwood series is the excellent soundtrack by Irish folk group Clannad and we could imagine their music playing in the background while reading the issue. Their sound is captivating with a mix of beautiful ballads, vocal harmonies, harps, and upbeat songs. Members Moya Brennan and Enya also have successful solo careers. 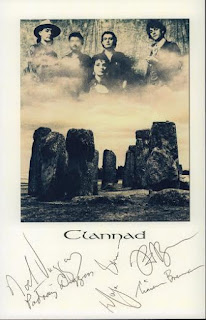 (Photo courtesy of the Sutherlands.)

Other supernatural elements in the story include the Black Alchemist and Ellen, the Guardian of the Wells and Sacred Pathways who is the sister of Herne the Hunter. 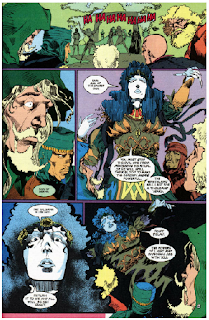 There are historical nods in the story, especially through the character Ariana, the Celtic Battle Queen of the Brigantians who hates the Norman and Saxon invaders and wants them all to die. The Brigantes were a Celtic tribe that occupied much of northern England in pre-Roman times and the Battle Queen title made us think of the famous Boudica who lead troops against the Roman army. 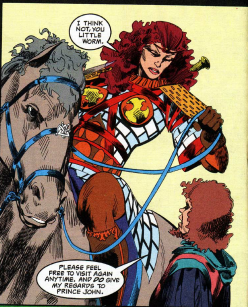 Art
The book makes good use of earth-tone colors. There are lots of dark greens and many shades of brown. There are large sections of the story that rely heavily on visual sequences without narration or conversation and with few sound effects.

The panels in the book are large and panel layouts are varied. The overall effect of the layout is nice and moves the story forward at a quick pace.

We particularly liked the drawing of the castle against a night sky at the top left on page 18. 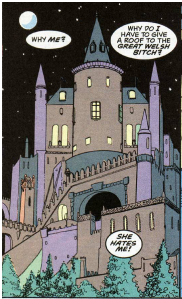 Occasional diagonal panels like the one on page 51 fit well with the action. On this page that diagonal line is a bit of a parallel to a slashing arc of a sword. 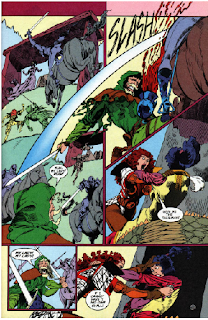 At the same time, there are parts of the art that we don't care for. In particular we don't like the way the artist draws faces and expressions. Many faces are long and gaunt and facial expressions are overly exaggerated. Most characters frequently look either surprised or crazed. It's an effect that periodically pulls the reader out of a good story and often detracts from the otherwise good art. Conclusion
We particularly enjoyed stepping back into history and legend. We like this time period for stories and the Robin Hood legend is a favorite of ours and the drawings of the forests, castles, and clothing nicely establish the tone and setting of the story.

It's great to see all of the other memorable characters including Little John, Will Scarlet, Friar Tuck, Much, and Rassan from the middle-east - a character reminiscent of Nasir from the Robin of Sherwood series - and we particularly liked the way Dinah aka Black Canary became Marian in this story.

Overall this is a great idea for a fun adventure that is well executed and features bold layouts and nice colors. If the faces were drawn differently it would be one of our all-time favorite books. We highly recommend the issue!

Posted by Clinton Robson at 5:48 AM