SYNOPSIS:
In space, one vessel being chased by a Kerellian one has to make an emergency landing on Earth. Meanwhile on Earth, kids who are taking a tour of the JLI's American embassy come across Fire and Booster Gold, both still drained of their powers in the aftermath of the battle with Doomsday.  The two heroes go to speak with Ted Kord who informs them he has a new set of armor for Booster based on the Rocket Red designs, but he believes that Fire's powers will either return on their own or be gone forever.  The embassy receives word about the crash and a team consisting of Wonder Woman, the Ray, Guy Gardner, Maxima and Booster Gold go off to investigate.  Not long into the mission, Captain Atom and a team of Peacekeepers arrive to take the ship's passengers Blake and Corbett back on government orders.  Meanwhile, elsewhere, Ice, who has taken a leave of absence to visit her dying father, has words with her power-hungry brother and gets chosen as heir to the throne.


MY THOUGHTS:
Oh wow.  What can I say that wasn't said in the synopsis?  OK, let's address the elephant in the room, eh?  TIN CAN BOOSTER GOLD!  Phew. Got that out of my system.  I feel better now.

Before I go any further, I have to say I actually really enjoy a lot of the 90s JLI/JLA/JLE/JLWhatever stories.  As tacky as some of them can be, they are still generally fun little romps into a world of generally lesser-shown stars.  This is only part of that wonderful equation.  This issue is a little difficult to read without the context of what has been going on in recent issues.  They refer back to Justice League America #69 when the League helped fight "that Doomsdude" as one kid calls him.  Booster's power batteries all got drained past the point of recharge or something, Fire's powers (pardon the pun) burned out, and Blue Beetle ended up in a coma.  Just a handful of issues ahead of #80 Beetle came out of his coma, but Booster and Fire are still powerless.  Hence the tension in some of Fire's depiction (but that is still no excuse for her wardrobe choices). 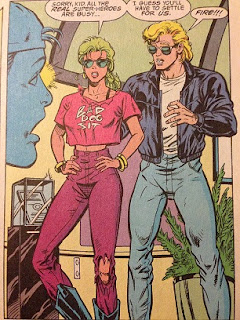 Toward the end of the issue we get what will become the start of the feud between Wonder Woman and Captain Atom.  It starts here, continues throughout Zero Hour and afterward leading to them forming competing teams both operating under the name Justice League. (Who could have thought then that Justice League Extreme would ever be cancelled? Ha.)

In case you haven't realized it, this is not the BWA-HA-HA League any more and hasn't been for quite some time.  This was during a time when DC took those "silly" Leaguers and tried to make them a bit more serious.  It was hit and miss for me, I'm afraid.  I honestly started back up with this Justice League after the Death of Superman storyline, especially for the Destiny's Hand 4-part story.  I am pretty sure this was my last issue for about 6 months or so until the Judgement Day crossover event.  My young tween/teen mind couldn't handle Booster's armor and a League full of people who were constantly bickering (little did I know that was a theme that would stick around for lots of 90s teams).

The art, while still centuries above what anything I could ever hope to draw, isn't really anything to write home about.  It is pretty much DC standard for the early 90s, I'm afraid.  It's not bad by any means.  Far from it, in fact.  However, it lacks that unique something that makes you want to follow an artist from book to book.  OK, I just noticed this.  Scroll back up.  I'll wait.  Look at Wonder Woman in that first panel of the last picture.  Her shock and surprise face looks like somebody put something very cold somewhere very sensitive.  I suppose there is a BWA-HA-HA moment after all.

OK, so fuss as I may, I still enjoy this era.  Some of these characters made my 90s comics reading a blast.  I always seem to find joy in the B-list (or even lower) characters.  I'm just not entirely sure this character arc was what I needed then or now.  However, I will still always enjoy this team.  Even Rocket Gold...er, Booster Scrap Iron...er, Iron Man....y'know, that guy from the future who will eventually (many years from this issues) get back to "normal." 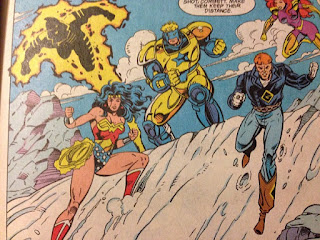 So much yellow on this team.