NOTES: This story has appeared by itself, as well as being featured in Hellblazer #62, The Sandman #46, Shade the Changing Man #32 and was collected in the trade collection Death: The High Cost of Living.

SUMMARY:  After warning the reader that what she has to say may offend those who are 'offended by any mention that human beings have things under their clothes, let alone that they do anything interesting with them,' Death talks about HIV/AIDS: how it's contracted and how the reader can minimise exposure. 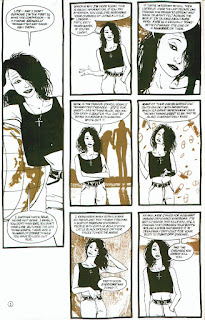 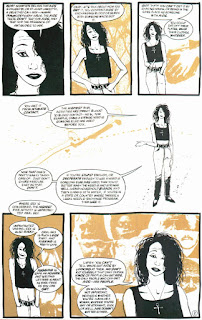 At the midway point she calls on John Constantine to show how to put on a condom using a banana as a prop. John seems uncharacteristically embarrassed by the whole affair. She concludes by warning that there's another unexpected by-product of unprotected sex: life, in the form of unplanned children. 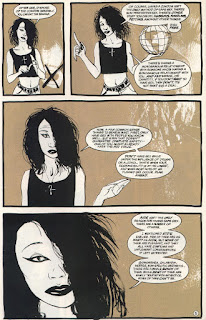 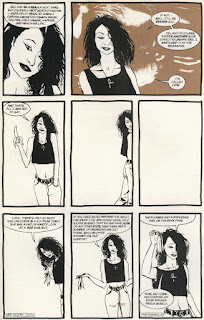 She signs off by advising the reader to check the back page for HIV/AIDS awareness and support numbers, and to dispose of his or her banana peels wisely.
(Summary taken from Hellblazer Wikia) 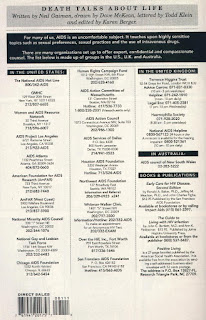 MY THOUGHTS:  I received this PSA back in the mid-90's in a random grab bag I had included with an order of comics (probably from American Entertainment, but I'm not sure).  This was released at a time when AIDS had only been around a few years and there was still a lot of misinformation floating around.  The comic served as a great way to spread the word about what needed to be known about AIDS, as well as a good list of reasons for practicing safe sex.
This comic served as my personal introduction to Death, John Constantine and Vertigo in general.  I must say, it left me unimpressed as an actual comics story, but as it is a PSA that shouldn't be considered (I was a teenager, I got a lot of things wrong).
The story is very informative and pretty humorous when needed.  The title itself always made me smile in and of itself.  However, honestly, one of the cutest moments in all of comicdom is when John hands her the banana.  I don't know that I will ever not get a giggle out of that.  Even when writing a PSA, Gaiman seems to be a master of words. 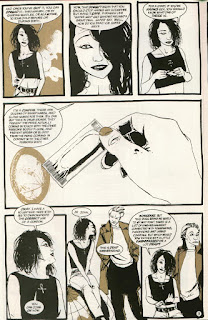 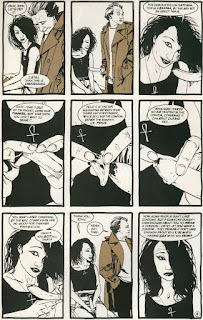 McKean's art is perfectly on model here. He was a major Vertigo artist in the 90's so it stands to reason that he'd be the artist on something like this--instantly recognizable and producing something that easily matches the hit Vertigo books that teens were buying up like crazy at the time.
There's really not much else to say.  This was a PSA in the same vein as most any other comic book PSA.  I find it nice that they took a different approach by not using traditional superheroes, which makes sense considering the subject matter. It's a topic that is more relevant to teens so it makes sense to use characters the teen audience at the time.  The message comes across loud and clear with straight-forward facts. It's not preachy or full of guilt trips.  A smart approach.
It's highly doubtful this will ever turn up in some quarter bin or other store location these days on its own. It was apparently included in three other individual Vertigo issues, as well as being including  one of the Death trades, so it can be found.  It's super short, but sometimes some of the best stories are.
Posted by Clinton Robson at 12:30 AM