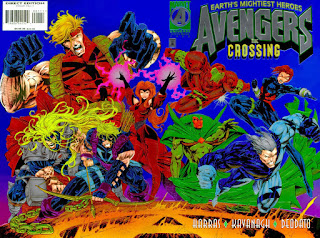 
SYNOPSIS:  We open on a female figure clad in some sort of armor drifting backward through space and time, trying to find a New York City unlike the one she left. 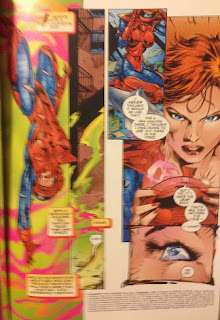 She emerges into the right physical setting, but not yet quite the right time.  As she emerges from an alley, Rita DeMara stumbles into an altercation between two known rebels--Hawkeye and Black Widow--and the authorities. The Avengers are apparently now outlaws.  As Hawkeye dies and Black Widow is taken away, Natasha spots Rita in the crowd and shouts out a warning to not go to the mansion.

A girl in the crowd who looks like she could be Crystal's daughter as a teenager appears to recognize Rita.  Something starts with Rita and the girl is determined to stop it. Rita melts into the timestream again seemingly against her will. This was at least a decade off her target. Hopefully the next leap will be the leap home.  As she emerges again, she is indeed home (more or less).  Thor flies by and she chronal jumps again, appearing near the mansion.

Rita (Yellowjacket) collapses in the snow, nearly passing out from such a long temporal journey.  Coming across a newspaper she realizes she is only a few months away from her goal, but already Captain America has been labeled a traitor.  Yet another chronal shift and we see a heavily mutated Wasp, Century, Hank Pym, Crystal and Jarvis attacking the mansion with Jarvis claiming he is the one that whoever they are after will recognize. 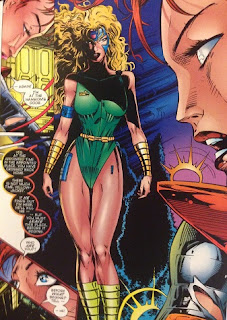 Before she can get answers Yellowjacket shifts AGAIN.  She's at the mansion door, "at the appointed time," as a mysterious blonde woman informs her. The woman looks similar to the blonde who recognized her earlier.  She leaves only a few cryptic words for Yellowjacket before vanishing. Rita is confused, but knocks on the door. A shadowy figure opens the door and before Rita can explain to the person, she is hit with an energy blast.  The figure drags Rita's body into the mansion as Luna Maximoff, the little blonde girl, looks on from her room upstairs.

Three hours later, a mugger is stopped through the efforts of Giant-Man, Crystal, Quicksilver, Wasp and Beast. As the police arrest him, the mugger breaks free and grabs an officer's gun. An arrow through the hand makes quick work of the escape attempt, courtesy of Hawkeye.  It appears all these heroes are in town thanks to Tony Stark throwing a party to celebrate the anniversary of the founding of the Avengers, though Hawkeye seems to be on the outs with many of the others. 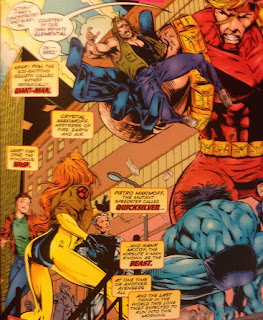 In the mansion, Tony Stark is lost in thought, remembering things long past.  The Scarlet Witch interrupts his musings and the two discuss chances for new beginnings.

In Central Park, Hercules ponders his recent loss of immortality when the future Luna attempts to appear before him.  She does her best to plant information in his mind and warn him, but she can't fully sync with his time and quickly vanishes.

Later, below the mansion Hank Pym, Wasp and Black Widow are investigating a mysterious door that resists all types of scans and nobody knows what lies beyond.  Beast shows up and tells them not to worry so much about the door, but as they turn to leave Giant-Man is almost certain he could hear the faintest tapping.

Upstairs Deathcry and Jarvis have some cute banter while Marilla worries about young Luna who has been acting strangely lately.  As Wasp enters with a flourish and an attempt to help Jarvis cook, Deathcry takes the opportunity to take Luna upstairs in hopes of cheering her up.

That evening, what starts as pleasant relaxation and a friendly game of cards turns into a heated argument between Hawkeye and Tony Stark over Stark's role in the Avengers family.  Wanda and Vision break up the argument before it can become anything more.  Crystal and Quicksilver discuss love, Janet frightens the crowd with her dip, and down below the door pulses with energy.  While Wanda and Vision discuss what once was and what currently is, the door pulses more and more, all the while the tapping sound growing louder. 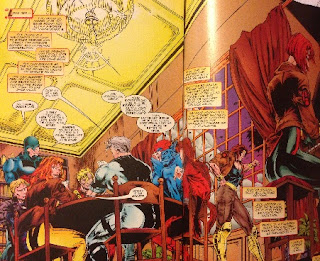 Nearby and loud boom alerts the Avengers to a group of superpowered individuals attacking a lone figure on top a building.  The group, sans Wasp and Jarvis, rush to the rescue.  As the battle continues, the mysterious attackers begin to retreat into a dimensional warp.  As they all depart, Hercules recognizes the lone figure. He has aged and been beaten nearly to death, but it is none other than Gilgamesh!  Gilgamesh is an immortal, but he has somehow been aged. Suddenly, Luna's warning returns to Hercules's mind.

Future Luna attempts to appear again, this time outside young Luna's room, but vanishes before she can do anything. 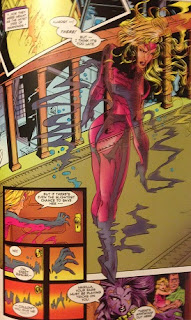 Near midnight, Black Widow and Tony have a heart to heart while Hawkeye eavesdrops outside in the hallway.  Deathcry tries so valiantly to calm young Luna, but decides to let Quicksilver and Crystal try to soothe their daughter's cries.  Deathcry and Marilla go to get Luna's favorite doll which Marilla left with the laundry.  As Marilla gets the doll (without Deathcry, by the way), she notices a bright light coming from another room.  It glows so brightly she almost mistakes it for divine.  Investigating, she spies a shadowy figure that she recognizes.  Apparently, this man has solved the mystery and opened the door, which Marilla thinks will please the others.  Thinking she has seen the secrets, this man quickly fires an energy blast through Marilla's skull, effectively killing the nursemaid. 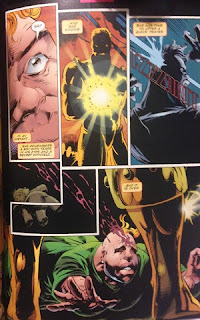 And slowly pulling back the light, it is revealed the mysterious figure is an almost fully suited up Iron Man, who says that Marilla simply had to die. 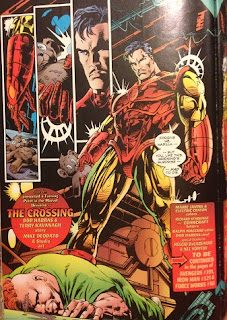 MY THOUGHTS:  Oh holy Hannah hotdogs, where do I begin to even discuss this in any sort of rational manner?  OK, allow me to borrow from Nathaniel Wayne of 90's Comics Retrial and say this one is EXTREEEEEEEEEEEME!

Oh, this is such a 90's comic.  Pouches, spikes, chains, huge muscles, big breasts and booty shots abound in this book.  Not even kidding.  Oh, and the leather jackets (and not even the fun "Gatherers" story era either).

I almost never discuss the covers, but let's start there.  This is a wraparound, chromium foil cover.  You can see all the above 90's tropes (aside from the booty shots) on the cover alone.  Let's not dwell on it too long, though.  It hurts the mind.

The story...is a bungle at best.  The first ten pages are the Yellowjacket time bouncing stuff.  That aspect isn't so bad, but the fact that is drags on that long without any real direction and explanation easily loses the reader and the interest of anybody who might be able to ignore the art and and armor (Yellowjacket wearing ARMOR?!).  The mystery of who killed Rita is pretty good for hooking the reader, but it is only kept in the reader's mind by including Luna in 80% of the scenes from here on.  Otherwise, there is nothing to make anybody really think about it again.  This is a double-sized special, people!  Somebody is dropping the ball in editorial.

OK, the "Hawkeye is pissed at Tony for Mockingbird dying" thing is, pardon the expression, beating a dead horse.  It does nothing for our plot, especially given the revelation at the end.  All it really does is help ensure nobody really likes Tony or Clint, as they both come off as 90's assholes.

Similarly, the two love stories are so poorly executed that even a late-90's/early-00's teen drama feels more realistic and endearing.  Also, anybody unfamiliar with Avengers history will fail to recognize the references to Wanda and Vision having had children.  The Crystal and Pietro issues are somewhat spelled out, but even so not enough to brand new readers. 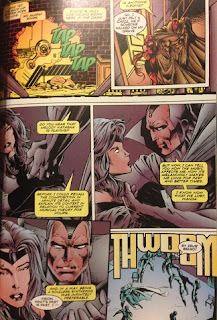 In short, there's way too much going on in the story to be able to fit it all in with any chance at properly executing all that has been attempted.

Do I really have to talk about the art?  OK...but only briefly.  This is quickly turning into a three-cup length review.

It's....OK...for the time...I guess?  I mean, the designs are all on model for what what pretty much Marvel's standard at the time.  1995 was just not the best year for Avengers designs.  As I said before, pouches, chains, spikes...SIIIIIIIIGH.  On a positive note, I am pretty alright with Scarlet Witch's redesign and Quicksilver's costume is still pretty close to what he'd been seen in before.  Many of the others are starting to creep closer and close to Image designs.  But it's not just the costumes.  The hourglass designs of the women quickly turned into the timers from Pictionary.  Such tiny waists with huge breasts and popping booties!  The men are not exempt either.  Their torsos are so hugely massive that I am unsure how their legs support them.

I gotta go back to the plot for a minute.  Iron Man? Killing innocents? Being a complete melancholy millionaire turning asshat?  Ugh!  This is such a crappy twist.  It's interesting, but it's not.

And of course it all ends up being part of this massive crossover.  I'm hoping future Luna appears more in this, but honestly I will never bother to track down the other parts.  The best parts of this were Beast acting like his old Avengers self instead of being the stodgy X-Man and future Luna looking like she could be a great resistance leader.  Oh for what should have been...

The only reasons to pick up this piece of...some sort of comic...would be to either fill in a completionist's gaps or to have a shining (pun intended) example of what the sins of 90's comics were like.  Oh goodness...even if found in the quarter bin this might be something to run from. 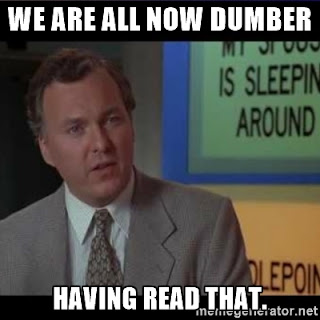 Posted by Clinton Robson at 5:33 AM