SYNOPSIS:
Professor X, Cyclops and Storm have crashed in the Antarctic. Cyclops's ruby quartz visor is missing, Xavier's mental abilities have been pushed to their limit and Storm is beyond exhaustion.  The three have been shot down by the Upstart Sienna Blaze, herself acting as a part in the Gamesmaster's overall scheme.  Bishop and Psylocke mount a rescue attempt, but will the three crash victim X-Men survive long enough to be found or will they fall victim to the elements or Sienna Blaze first?

If you were reading comics around the time this came out, you remember very well how excited X-fans were supposed to be for this new title.  In a time of new #1s popping up just to be snatched up by potential collectors, new characters, new sales gimmicks, etc., oversaturating the market, this one was meant to be on par with Marvel's Todd McFarlane led "adjectiveless" Spider-Man title released in 1990.  I can't speak for a sales comparison, but with no less than five other X-books already on the stands one would think that it wouldn't have fared too well, especially with the $3.95 cover price.  Granted these were extra large stories but still, that was over double the normal price for a comic in the early 1990s.  However, this series managed to last 50 issues.  Not too shabby a run.

If you read X-books in the 90s there were several names you knew by heart--Jim Lee, Rob Liefeld, Fabian Nicieza, Scott Lobdell.  Only one of those is involved in this issue.  The story, done by Mr. Lobdell, is pretty straightforward.  A small group of X-Men is shot down after a visit to the Savage Land.  The will have to survive until they can find a way out or help arrives.  I have no problems with that.  The premise is sound.

Where I find fault is in the details of this story.  Sienna Blaze, a character that has been built up at this point to be a major new enemy for upcoming stories (remember when I said they liked to introduce new characters?), is written to be an insanely powerful mutant yet she claims to have ever only used her mutant ability three times.  THREE TIMES!  How the hell does she even really know for sure what she does and how she does it?!  I mean, yeah "because comics," as several bloggers would tell me, but seriously? Suspension of disbelief only goes so far. 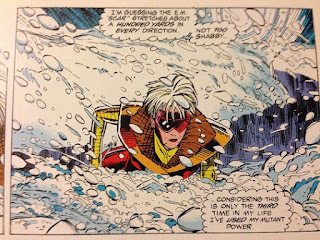 "Hi, I'm a god-level mutant who has used my powers less times than you burp in a given day."

I also take issue with the fact that, while Psylock and Bishop know the others are in the Antarctic, they both take off without any cold weather gear.  Remember, this is Psylocke in her barely-a-swimsuit 90s costume.  A large portion of the issue is devoted to how easily Cyclops, Storm and the Professor will freeze to death, and they are all at least mostly clothed.  What the heck does Psylocke think she's going to do?

Let's discuss the art for a moment and then I will come back to the story.  Trust me, I have good things to say, too.  The art is actually pretty good for the most part.  It's not up to the Jim Lee standard that got established a couple years earlier, but it holds up pretty well.  There are moments of ridiculous faces when they should be serious or surprised, but I assume some panels are probably the result of wanting to rush this book to print.  An X-book starting up with a new #1 was big business in those days, after all.  There are more than a few instances of "angry red eyes of anger" (credit for that one goes to "From Crisis to Crisis: A Superman Podcast") from Cyclops trying to contain his optic blasts, but it doesn't necessarily fit with his powers. I wasn't aware his optic energy could make the wavy energy steam looking stuff. 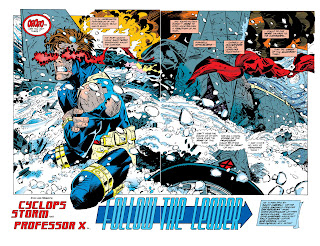 But to be fair, it does help get the point across that he can't just turn it all off.  The art here is used both to help draw in a reader and to reinforce the story points.  And that is where is succeeds.  It doesn't detract from the story, but instead adds to it.  It's almost as if some editor-type person said "Hey guys, a comic book is both story and art. Figure out how to make it work."  Whaddya know?  I guess the farmer and the cowhand can be friends.  (A nice shiny penny for anybody who gets that reference.)

And now, back to the story.
The story itself kind of fails as a big adventure.  However, I'd like to think it serves a different purpose.  This was a #1 in a series that promised mostly one-and-done stories, meaning you only needed to buy that issue to get the full story.  No "To be continued" endings.  You might not have all the info you need without reading other storylines outside of it, but you could at least say your $3.95 was spent on a single story, similar to buying an annual (crossover annuals not included).

Throughout the story, Professor X keeps telling Cyclops that he is only "graduated student" that never says "Charles."  It's always "Professor" or "sir."  Scott tries several times and can't bring himself to say it.  He claims to do it simply out of respect, but it is revealed to the audience that it is more because Scott sees Charles as more of a father than a mentor, Scott having been raised in an orphanage.  There is also the running theme of the Professor showing how much he would sacrifice for his students, as well as casually mentioning the current state of the X-books.  This isn't meant as a story as much for the hardcore X-fan as it is for a new reader.  The story, for what it is, can be enjoyed by either, but a new reader will get 10x more out of this than the experienced one.  After all, this was a #1.  It was flaunted as a "collector's item" but really this is as much a victim of the 90s boom/bust as any other book.  However, it really could have had something on the cover about "great jumping on point" and gotten plenty of readers introduced to the then-current estate of affairs and gotten them curious.  Nothing too major is revealed about Sienna Blaze or Gamesmaster, but enough is left dangling to make readers want more.

All things considered, this issue does hold up pretty well.  It is not nearly as solid as other issues of the series, as they would later delve into things like Magneto's origin, revealing Rogue and Nightcrawler to be more or less step-siblings, etc.  But, it does accomplish hat it sets out to, if you know what to look for in the pages. 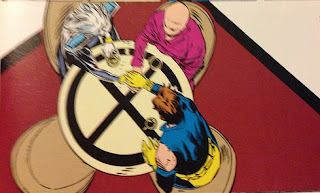 Posted by Clinton Robson at 7:38 AM