NOTE: I must apologize for the quality of the pictures in this week's blog. Scans of the issue are extremely difficult to come by and I am currently in the process of acquiring a new one, so most of the images below were taken with my phone and with my poor photography skills. Please take them with a grain of salt. Thank you.

SYNOPSIS:  A new mutant has suddenly discovered his powers and is causing a large disturbance at a local high school.  Professor X summons the X-Men to help calm the situation and recruit the young mutant for his school.  Magneto is also aware of the situation and takes the Brotherhood of Evil Mutants along with him to sway the mutant to his side in hopes of turning the tide in his war against the humans.  Which side will the young man choose?  And will he make that choice before it is too late? 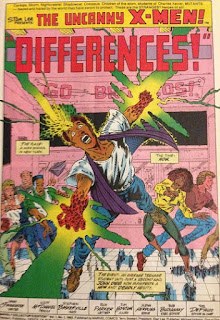 MY THOUGHTS:  OK, so if you were reading Marvel comics in the early 90s, there is absolutely zero doubt in my mind that you know who the X-Men are.  Don't lie.  You know them.  You probably read them, even if they weren't in their own title, because let's face it, they were everywhere--especially Wolverine, because that dude sells books.  I guess that's what he really meant when he said he is the best there is at what he does.

Now, aside from knowing who the X-Men are, reading those early 90s books probably also brought you into contact with a certain ad on the back cover of a lot of Marvel books. 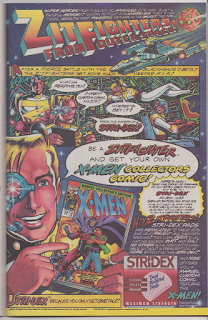 Apparently Stridex had tons of comic book ads back in those days. I guess they figured comics were being read by a lot of pimple-faced teens looking for a miracle cleanse and they saw a mountain of cash just waiting to be made.  Anyway, somebody cooked up the idea of a giveaway comic by sending in a Stridex proof of purchase and one crisp American dollar.  What you got in return was a 20 page comic story which also had a pin-up page and a word search. Take care not to be too excited there, folks.

In all honesty, given the nature of this type of product, it's not an absolutely terrible book.  Is it hackneyed? Definitely. Is it worth a dollar? Eh, probably not really, but it's definitely not the worst comic purchase I have ever made in my life.  Is it fun to read?  Well...that's hard to say.

First you have to consider this is a giveaway comic. It's not really meant to bring in new readers, nor is it exactly a "grand prize" kind of issue.  It is a gimmick and therefore not a lot should be expected of it.  With that in mind, yeah, it's a decent enough book for what was actually invested in it.  Fingeroth writes a fun enough story if all you are really wanting is a throwdown between the X-Men and the Brotherhood.  While we're on the subject, I'd like to take a moment to examine the teams a little. 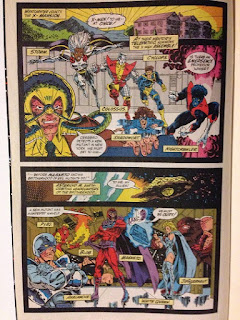 The X-Men in this issue consist of Prof. X, Cyclops, Storm, Colossus, Nightcrawler and Shadowcat.  The Brotherhood is made up of Magneto, Pyro, Blob, Avalanche, Juggernaut and the White Queen.  This does not sync up with either then-current team line-up.  In fact, with a few swaps, it really feels more like the versions seen in the original X-Men animated pilot Pryde of the X-Men. Just a thought, though.  I could be totally off and Fingeroth just went with X-Men he liked best and the villains he saw as most iconic.

The art is...fair.  The cover pretty much sums it up, really.  Full figures look really good, especially if they can be used in a splash page or similar large design.  Crowd scenes (of which there are many in sometimes too-small panels) get much less detail.  In fact, at times the Brotherhood characters seem all but laughable.  For example, gone is the level of detail to make the White Queen a good looking lady and instead she is Random Blonde Woman #3 who just so happens to be a powerful psychic mutant.  I am totally unfamiliar with this art team, so they may honestly have just been some people who Marvel decided to put on this project because they had nothing else going.  Again, I refer back to the fact that this is a giveaway issue that Marvel really wasn't making a huge profit on, so the art will sadly suffer from this.  On the flipside, I remember getting better art from a Spider-man PSA comic.  Eh, tomato, to-mah-to.  It's fun enough art for the time period and what you're getting for your investment.

Don't be fooled by angry Will Smith wannabe on the cover.  He spends 95% of the book scared out of his mind over his mutant powers, as any sane person should be.  This story ends up being a minor introduction to the X-Men world (but then again so were many regular issues around this time) and a minor PSA comic.  John Dee (I guess John Doe or John Smith were too obvious?) is calmed down and saved from causing even more destruction with his unspecified mutant ability by the power of friendship from his multi-culture pals.  This is both a nice touch and a bit forced.  Just roll with it.  You kinda have to just accept the plot as it exists because Pluto could vanish into the holes associated with this one.

In the end, both the X-Men and the Brotherhood respect John Dee's decision to join neither side and instead remain a regular high school student.  They part ways with Magneto vowing that "the cycle of revenge has just begun," saying that John will one day be theirs. (Guess what. John Dee is never seen nor heard from again. Go figure.)  The issue closes with Prof. X saying "I think John and his friends will take their differences and use them to make a better world."  And if that doesn't sum up the point of the story, I'm not sure what else does. 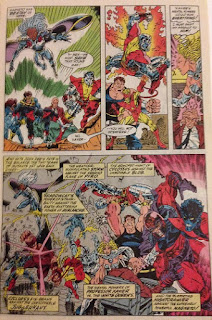 So, in the end, is this a fun story? Yeah, I guess so.  By a 60/40 split, I'd say it is.  It's the perfect read for those times you need to fill 5 minutes. Sure the story and art are kinda cheesy and probably meant for a much younger audience, but keep in mind it was also put out in conjunction with a promo done by a product designed to fight acne.  I suppose that, if nothing else, you can take it as an early 90s X-Men book without Wolverine, Gambit or Cable anywhere to be seen, so that alone should make it rare.

If you find it in some random cheap bin and you feel like a quick one-shot to read between sips of the morning coffee this is your book. If you are expecting anything more, then buy it if you want it. Just don't say I wasn't honest with you up front. 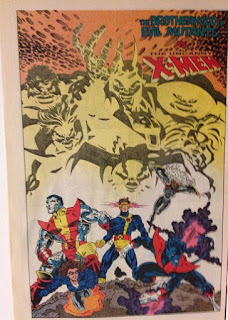 Posted by Clinton Robson at 3:38 AM