SYNOPSIS: "The Grandmaster enters a cosmic wager with Death herself, using Earth's mightiest heroes as his chess pieces! His goal? To return his fellow Elder of the Universe, the Collector, to life! The stakes? Nothing less than the fate of the Earth itself! Now, heroes from around the globe must battle it out in a contest like non ever seen before. Guest-starring...everyone!"
--from the back cover 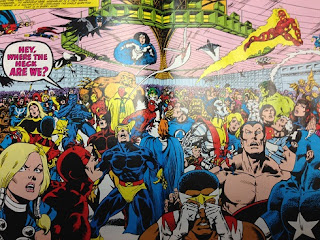 The Grandmaster and Death (who remains cloaked and mysterious for 2/3 of the story) stop time on Earth and transport all of the heroes in the world to compete for the power to return the Collector to life.  They divide the the heroes up, using only human and mutant heroes--no gods or cosmic beings.  The stage is set, the teams established, and the battles commence!  Who will win and what will it mean for the planet Earth? 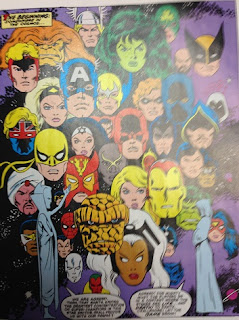 MY THOUGHTS:  This edition collects all three issues of the original mini-series published back in 1982.  I had never read it until recently, and honestly I am sad that I never tracked it down before.  This was an absolute blast!

With the team working on this story, how could it not be wonderful? Mantlo, Gruenwald, Romita, Jr., and Layton alone make this a trade worth having in any collection.  The rest are icing on the cake!  Trust me, if for some strange reason you have never heard of these folks, they are all masters of what they do.  With one minor quibble, but that comes much later in this review.

Where do I begin?  This story is unique because of the way it includes heroes from across the globe. Russian and United Kingdom (amongst other countries) heroes appear alongside American superheroes that are probably more familiar to many readers.  But that's not all.  Many of the American heroes chosen are some of the more underdog heroes--Sue Storm, She-Hulk and even Iron Fist. 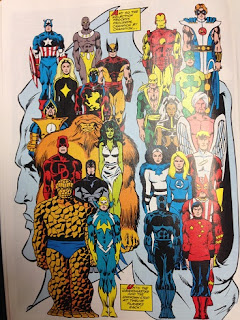 So Grandmaster and Death take their team members and divide them up into smaller teams to search out fragments of an orb to determine winners.  This is all fine and dandy. The battles and challenges in the landscapes are highly entertaining and keep the reader interested.  I really only have one complaint, and that is at the end of the final battle of the "pawns."  Captain America and Shamrock both go for the final piece at the same time.  Cap is on Grandmaster's team and Shamrock is on Death's.  Shamrock gets the piece first, but the story gives Grandmaster the point.  I am not sure if there is a hidden backstory here or not.  It feels like there are two possibilities.  Either the writers simply forgot who was on which team and goofed or this was thought/intended to be a longer series  and this was going to add to a longer plot but got shortened at the last minute.  Either way, the story demands Grandmaster wins so that Death can go through with her plan to trick Grandmaster and make a point that she reigns supreme.  Oh well.  It's not a major annoyance, but enough of a flaw to stick in my mind, especially among an otherwise near-flawless story. 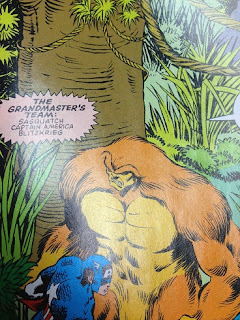 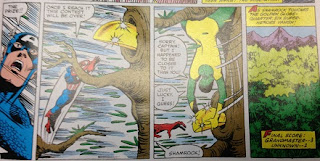 The art outshines the story, and that is no small feat.  This is exactly why Marvel books in the 1980's sold so well. Every panel in this book is a beauty to behold and I am sorry if this is the style that doesn't appeal to you.  It's simply gorgeous.  John Romita, Jr. is well-known for his Marvel characters, and this is the perfect example of why.  Every character feels and looks unique.  The pencils and inks both flow well together.  The colors, while dated and very much signifying the era, are both complimentary to the story while contrasting with color of other characters to help them stand out where they need to. 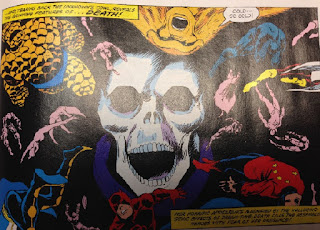 I honestly can;t suggest this comic collection to readers enough.  It collects all three issues, complete with a section on character profiles which gives a brief description of who all these characters where back in the glory days of 1982.  This little time capsule is worthwhile on its own if you are interested in Marvel history.  For example:

Just a small bio and an idea of where to start if they catch your fancy.  No a bad idea, I must say.

So, yes, for the dozenth time, I love this book.  Everybody, stop reading this review (when you get to the end, of course) and go buy this book (or at least track down the old singles, but honestly they are probably the same price).  Hope you enjoy it as much as I did.
Posted by Clinton Robson at 1:39 AM

Email ThisBlogThis!Share to TwitterShare to FacebookShare to Pinterest
Labels: Marvel