SYNOPSIS:  Daredevil has been hunting for his friend Ben Urich, who disappeared several days prior.  Daredevil deduces through a series of clues and encounters that Urich is being held captive by Mister Fear.  It is revealed that this is a Mister Fear long believed dead who has ties to Daredevil's law school days.  The world at this time believes Matt Murdock to be dead and a new Daredevil to have taken his place, but Mister Fear suspects the truth.  He has kidnapped Ben Urich and several law professors to put Matt/Daredevil on mock trial and to find him guilty. Daredevil shows up, but only with the support of Ben Urich do they make it out of the scenario alive.

MY THOUGHTS: OK, several things come to mind.  First, let me address the gimmick.  Over the Edge sold for 99 cents back in 1995. 99 cents!  Over the Edge (and Under a Buck!) the covers read.  This was amazing considering the average Marvel comic of the time was usually $1.50-$1.75.  And these weren't just 12 page issues. You got a full comic for the price.  These were one-and-done stories featuring a rotating cast of characters taken from what was then the "Marvel Edge" line of books--Daredevil, Hulk, Punisher, Doctor Strange and Ghost Rider. In a way this line was something of a precursor to the Marvel Knights line that came later on. Each issue was a story that wouldn't really alter the main book's continuity but instead served as a way to introduce a reader to a character without making it dull, retelling the origin or spending too much time rehashing the recent storylines.  It was more like "Here's an inexpensive story about a character you may not be overly familiar with. Give it a try. If you dig it, he's got a main book you can pick up every month."  Sadly, this book only lasted 10 issues. 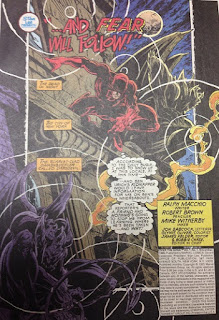 Ralph Macchio (no, not the Karate Kid) tells a great story, with a couple nitpick exceptions that I will address later.  There is not a lot to address about the plot that isn't told in the synopsis.  DD goes from encounter to encounter because Fear places ads in the Daily Bugle and leaves various packages as clues after Matt saves the day by dealing with fear toxined people.  The plot moves along smoothly and quickly going from beat to beat without a drain on the reader.  Exposition between action scenes feels fine for comics of the time, although Mister Fear's dialogue borders on the corny side during the final encounter.  He's a bit of a ham, coming across more as an eccentric actor or guest villain on the 60's Batman show than as a disgraced law student.  I want to praise Macchio for his reference to the Oklahoma City bombing which was something still fresh in people's minds at the time.  Being from Oklahoma, I found it nice to know that Marvel not only recognized our existence but also gave us a little nod that they were thinking of us.

Now to address my complaints.  It seems that we get a little inconsistent with Daredevil's powers. Can he feel printed letters the same way that a non-superpowered blind person reads Braille? It seems that some of the things Matt gets (the newspaper, some of the notes) might have raised lettering or Braille editions or something.  Other things do not.  A college yearbook, for example, and then one note is clearly not in Braille. I honestly think the writer and editor both glossed over that and forgot that Daredevil is blind.  Maybe I'm the one missing something, but oh well.  It's really a minor factor that can be excused by "Because comics" and "The plot must go on." 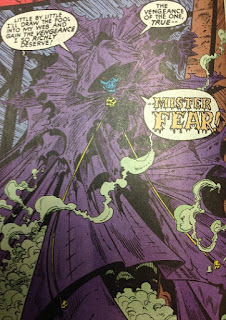 The art is fan-freaking-tastic!  The cover looks a little awkward with linework going around and Daredevil leaping toward the reader. Ignore that. It's not bad, but it doesn't compare to the interior.  Daredevil never looks awkward inside.  He looks exactly like you would expect him to.  All of the action scenes are smooth and can be easily followed without much reliance on the dialogue.  Mister Fear looks incredible and downright creepy.  Much of the time he is covered in shadow and darkness with either his cloak or his fear gas wrapping around him.  Only once does he really make a point to show off his full costume and he is very dramatic about it.  This is an art team that knows how to work from a character-driven perspective, not just being flashy and showing off. 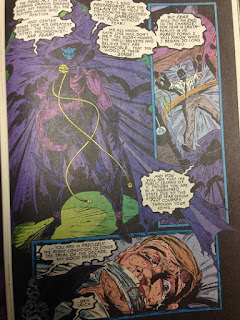 I remember buying this issue when it was new but I barely remember reading it. Maybe once, way back in the day.  I am beyond thankful that I reread it 20 years later for this review.  I have a greater appreciation for it now than I did back then.  Maybe I have a new outlook on these things or maybe I have just matured enough to appreciate where they were going with this.  Either way, this would be an incredible buy for a dollar now and it certainly was back then, too.  I am unsure of the print run of this series, but I'm sure the back issues are out there somewhere just waiting to be found and enjoyed.  If you are a fan of any of the characters used in these various stories I highly suggest getting them if/when you find them.  Hard to go wrong with a one-and-done anyway, but if all the stories are as well written and beautifully drawn as this one you will hate yourself for passing on them. 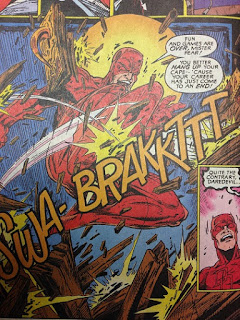 Posted by Clinton Robson at 3:56 AM

Email ThisBlogThis!Share to TwitterShare to FacebookShare to Pinterest
Labels: Daredevil, Marvel, Over the Edge