Superman--My Superman hails from the alternate reality depicted in Superboy Annual #1. This is Connor Kent aka Kon-El, the clone of Superman.  After an alien invasion that was overturned by the Super Seven. The final battle resulted in the original Superman’s death, but Superboy took over the role of Superman to serve as a symbol of hope.  In my version of the story he has since spent time in the 31st century with the Legion of Superheroes and changed his costume before returning to his own time only to be recruited in this multiversal Justice League. 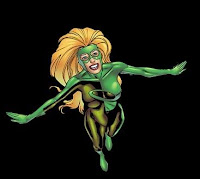 Green Lantern--Alex DeWitt.  Alex is from a reality where she was picked by Ganthet to be the last Green Lantern and Kyle Rayner ended up killed by Major Force. All this was depicted in in the Green Lantern: Circle of Fire miniseries.  Kyle Rayner fans are screaming at me right now telling me how she really wasn’t from an alternate reality, she was just a creation of Kyle’s wish for help.  Well guess what. This is my imaginary line-up of imaignary characters for an imaginary team. Deal with it. 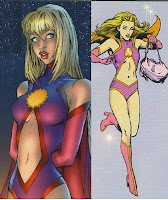 The Flash--Lia Nelson from Earth-9 aka the Tangent Universe.  Lia was the first baby born in space, and as such she gained light-based powers that allow her to create constructs from it and to travel at the speed of light.  On her Earth she was both a hero and a celebrity.  I realize a lot of her abilities make her similar to Green Lantern, but Lia also possess super strength and size manipulation.  She would actually make a great partner/BFF for Alex DeWitt. 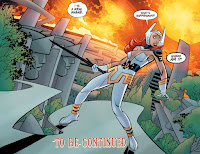 Wonder Woman--Bekka of New Genesis, granddaughter of High Father.  This version of Bekka hails from the world showcased in the animated feature Justice League: Gods and Monsters.  She is  the widow of Darkseid's son Orion, who fled Apokolips for Earth using a mother box-sword after the New God Highfather ruthlessly killed her husband as part of the massacre of the Apokolips royal family.  On her Earth she was a mostly ruthless hero, but after the events of Gods and Monsters she has sought to reform and become a true hero.

Huntress--Helena Wayne.  This daughter of Bruce Wayne and Selina Kyle hails from the Earth-2 that existed prior to the events of Crisis on Infinite Earths.  She possesses the best of both her parents’ skills but has a bit of a problem with her temper.  She’ll serve a purpose as a non-violent conflict within the team, even though deep down she’s actually very happy for a place to belong since the death of her parents.

Robin--Tom Wayne.  In the futuristic Robin 3000, Earth is controlled by despotic aliens. Batman (Bruce Wayne XX) is killed trying to stop them, but his mission is continued by his nephew, Tom (Thomas) Wayne. Tom has to adjust to the 21st century, but being from the far future helps him to be the team’s resident tech expert.  He partners up with Huntress easily enough, especially since they are distantly related, and he can be a friend for Superman as both have experiences in the future (though both very different).

Hawkgirl--Shayera Hol.  This is the Hawkgirl who appeared in the Bruce Timm Justice League animated series.  Shayera has been recruited at a point after the end of the series.  She has decided to embrace some of her potential Egyptian heritage and blend it with her Thanagarian heritage to redesign her costume.  She has finally learned to control her temper and serves as a mentor to a younger generation of heroes. On this team she continues this role, as well as helping the League with interstellar threats. 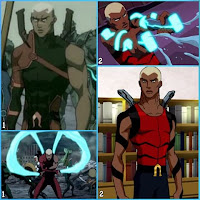 Aqualad--Kaldurahm.  On the animated series Young Justice we are introduced to the young Atlantean Kaldurahm, sidekick to Aquaman.  Throughout this series we learn that Kaldur is actually half-Atlantean and the son of Black Manta.  However, Kaldur overcomes this obstacle and establishes himself as a true hero and incredible leader.  He serves the role of leader on this team, but my version of Aqualad comes from a point further in the future than what we have seen in the animated series.

OK, so that’s my League.  Images to show you the characters and designs I have in mind are on the show’s website coffeeandcomicspodcast.blogspot.com so you can check them out there.  Why did I pick Huntress and Robin instead of an actual Batman? I’m not entirely sure.  Same reason I went with Hawkgirl instead of Martian Manhunter or somebody else.  Honestly, I just like this line-up.  IF I did write this book I would of course rotate characters out for other options a la Marvel’s Exiles series from the late 90s/early 00s (which Marvel recently announced a revival of the series/concept).  But yeah, those are my choices.  Do you agree or disagree with my choices? Do you think I could have picked better? What characters would you like to see here? Let me know with some feedback.
Posted by Clinton Robson at 12:00 AM