SYNOPSIS:
Stephen Strange is awakened one night by a nightmare.  In his dreams he sees glowing red eyes and giant fangs coming from the darkness.  In his home, Strange sits staring at a bottle of vodka.  He ponders over where he has come in his life since he was a vain surgeon and an alcoholic.  The lure of the alcohol is still strong, the temptation calling to him.  However, Strange shatters the bottle reaffirming that he will never willingly walk that path again. 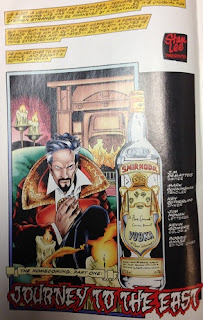 Wong enters and the two discuss Strange's current state.  He has been feeling adrift, as if he is not master of his own life.  Strange decides that he should return to the temple where he learned from the Ancient One in order to regain his sense of self.  Wong declines to go with him, though.  He has been upset with Strange for quite some time over events involving Wong's love Imei.  Strange has been unable to transform her back from the demonic force she has become, and in a rage Wong leaves. 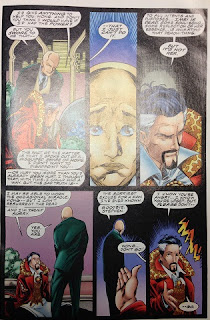 Strange bends the world around him and immediately journeys from New York to the Himalayas.  He has much to ponder and much to re-learn.  He walks through the halls of the temple, remembering who he was then and how events played out.  While lost in thought before the seat of the Ancient One, Hamir, inheritor of the Ancient One's legacy, startles Strange.  The two discuss the Ancient One's teachings and Hamir reminds Strange that it is not so much what you learn, but what you un-learn that matters. 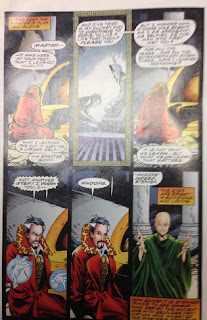 That night, the dream returns to haunt Strange once more.  As he calls out into the night, Hamir draws Strange deep into his own soul.  The two journey to Strange's childhood home.  There, they find young Strange not resting peacefully but instead attacked by a monster.  The young boy is saved by the intervention of the Ancient One, however Strange has no memory of this.  It is revealed that the memory had been blocked, though not by himself nor the Ancient One.  Instead, the memory had been blocked by Baron Mordo. 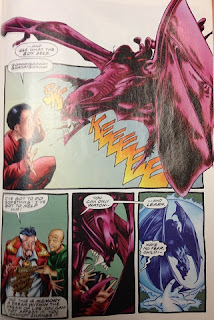 Mordo himself appears before Strange and Hamir, announcing that through his manipulations of Strange's mind that he has proven himself Strange's master.  Strange demands answers, but Mordo says the two shall be dead long before he could explain as several monsters under Mordo's command swarm over Strange and Hamir. 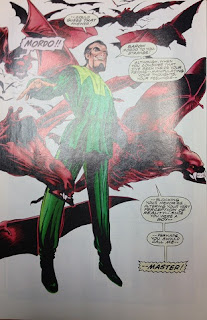 MY THOUGHTS:
This issue served as J. M. DeMatteis's launching point on the book.  Not every writer starts their run on a book by reexamining the main character, but he did and in great style.  Instead of simply retelling the origin, DeMatteis gives up glimpses of key moments in the origin story while giving the readers more of Stephen Strange's emotional ties to these moments than just how they fit into the overall narrative.  Readers feel Strange's desire for a drink, his haughtiness before the car accident, and his desperation to regain what he has lost regardless of whether or not it is something he actually needs in his life.

The plot itself--the introduction of something new to Strange's backstory and potential battle with one of his greatest foes--is a great place for new readers to come onto a book and a good way to spice things up for long-time fans.  It is indeed enjoyable and never feels like it is talking down to a reader or pulling them along to get to the point too quickly or too slowly.  The only part that requires any serious foreknowledge is the plot point about Wong and Imei, but that is explained well enough to get most readers through it.

Art is 90's Marvel without being too extreme.  Really the most 90's aspect here is the fact that Strange is no longer in his typical cloak and puffy sleeves.  Instead, he has fashioned the cloak to look more like a trench coat (because it's the 90's) and he instead wears a white shirt (untucked) with mystical designs all across the chest.  One could say he's trying to be a knockoff John Constantine in his looks, but it honestly doesn't come across as such.  I mean the similarities are almost impossible to miss, but Strange still comes across as more lighthearted.

Maybe lighthearted isn't the right word.  His stories are still serious.  But he just looks...kinder than Constantine, I guess.  Less dark and brooding than a Vertigo title might lend credence to, anyway.

This is a good issue, especially for people who might not have been overly familiar with Dr. Strange.  Is it worth picking up even now?  Yeah, I'd say so.  Especially if you can also get the rest of the story.  The issue makes me want to read more, and that's the real goal, right?  Yeah, it's definitely a magical treat.