SYNOPSIS:  The book opens on Michelangelo pulling back a bow and arrow. 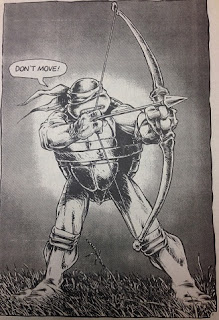 He has been doing his best William Tell impression by shooting apples off Donatello's head.  The two, along with Raphael and Leonardo, have joined Splinter, Casey Jones and April O'Neil for a nice picnic in the woods.  Casey is eager for everybody to hurry up and eat.  He says that after they all eat Splinter is supposed to teach him some "ninja stuff," but Splinter seems a little dubious.

A rustling in the bushes soon turns into a crashing as a man, terrified for his life, bursts onto the scene.  His glasses fall off and one of the Turtles "accidentally" steps on them, causing him to not see any of them clearly.  Casey's anger quickly takes hold as he berates the man for ruining their picnic. 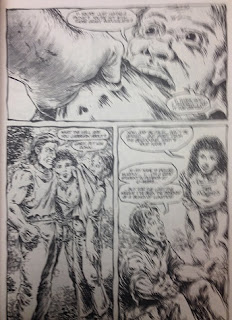 After April calms Casey, the man introduces himself as Michael Murphy and he explains he is on the run from a survivalist group called the Committee to Rebuild American Patriotism (C.R.A.P.).  Michael explains that the group threatened his life in order for him to build them a bomb, complete with a plutonium core.  C.R.A.P. is tired of waiting for American and the U.S.S.R. to start a war so they aim to start it for them.  Mid-explanation, a shot rings out and Michael is hit.  It's not an instant kill, but Leo notes that Michael is losing blood quickly.


Not too far away, the survivalists are congratulating their leader, Skonk, on his shooting skills. Skonk says that he only wounded Michael and that they need to go finish the job.  If it requires taking out those that Michael found to help him, so be it.  Pewk and Chet head one way with Spuds and Bubba going the other. Skonk goes straight up the middle. 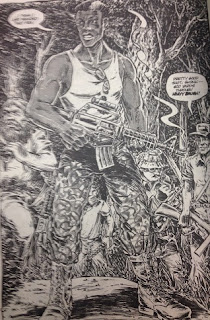 Leonardo guesses the group's strategy.  Casey and April will get Michael to a nearby hospital while Splinter and the Turtles try to take care of the survivalists and their bomb, but only after Raph and Don argue over the best course of action.  Raph and Leo go one way while Don and Mike go another. 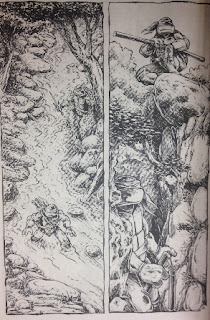 Donatello manages to take out Chet before smashing his gun apart.  After a small moral debate, he decides it is best to try finding and disarming the bomb.  Michelangelo, meanwhile, sneaks Pewk's gun away from him.  Backed against the rocks, Pewk pulls out a set of nunchucks and waves them threateningly at the young Turtle.  Mike is not impressed. 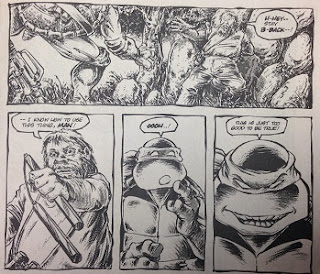 Skonk, picking his way through the forest, comes across Splinter, which leaves the man momentarily in shock.  Splinter attempts to reason with Skonk, but to no avail.  The two clash, with Splinter gaining the upper hand, despite Skonk's above-average physical resistance.  However, Skonk manages to toss dirt in Splinter's face, distracting the ninja master just long enough to make a mad dash back to the the group's secret bunker.

Elsewhere, Donatello has found the group's base.  He sneaks in, avoiding a crossbow trap on the door as he goes.  He find the bomb right where Michael said it would be.

Spuds is starting to have second thoughts about joining this group while Bubba is more than happy to be on this potential killing spree.  As they walk up a small creek, avoiding the water by stepping on the rocks, they fail to see that some of the larger stones are actually Raph's and Leo's shells.  The two Turtles emerge and make quick work of the two men.  Raph holds Bubba underwater long enough to make the man fear he will drown.  Splinter shows up and reminds his young pupil to not kill the man.  Instead, Raphael knocks the man unconscious.  Splinter notices Donatello is missing, and the four go to find their missing comrade.

Skonk has made it back to the bunker and retrieves his remote for the bomb.  Climbing to the top of the small house that serves as their base, Skonk gives a grandiose speech about how America has lost its way, lost its glory. He tells how his actions will make the world take notice.  Donatello comes running out, yelling that they all need to run and duck for cover immediately.  Within moments Skonk explodes the bomb.  It is not to the extent that Michael had said it would be, but the explosion is still enough to destroy the bunker and large amounts of nearby land. 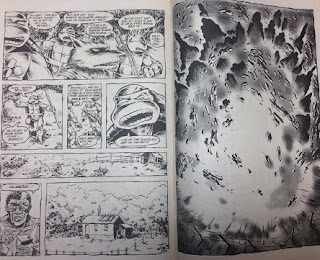 Later on, back at the farm house, Raph and Mike are in the background (playing badminton?) while the others sit on the porch and discuss the day's events.  Donatello had managed to disconnect the plutonium to prevent a large explosion, but it doesn't thrill him.  He still laments the loss of life, even if it is the life of an extremist.  He poses the concept to the others that in such a bleak and confusing world survival is what everybody wants. 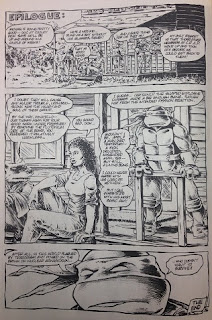 MY THOUGHTS:  Although not necessarily one of my favorite Ninja Turtle stories, this one is still pretty good.  And by pretty good, I mean it's a fun story with a powerful message at the end.  Donatello's musings...well, let's get to that in a minute.

This is art and story by Peter Laird, on of the co-creators of the TMNT.  He and Kevin Eastman were experiencing some minor burnout over the characters and workload at this point so the two had decided to start alternating their contributions from issue to issue, hence why Eastman is not part of the creative team at this point.  This story is something Laird says that he had been working on for a bit anyway, so it seems he was very eager to tell this story.  Even in the late-80's it seems the extreme "America has lost its way" groups were a present problem and weighed on people's minds.  Domestic terrorism in a comic about anthropomorphic animals with a lesson at the end.  Post-modern animal fable, perhaps?

OK, I know Laird's art is not for everybody.  It is pretty "indy" at times, especially on how some of the humans are drawn.  It varies a little throughout the issue.  Casey looks like the traditional overgrown meathead who is overly topheavy, but that's kind of Casey's thing.  As I said, Laird helped create these characters, so he darn well knows what the models are.  The Turtles themselves all look AMAZING.  This is easily some of the best they have ever been drawn and should be held up as a prime example of what those characters are supposed to look like.

So, Donatello.  While all the characters get their moments, Donatello is easily the main focus of this book.  He gets the most characterization.  We get to see early remnants of what will eventually develop into Donatello's strong proclivity toward pacifism.  His reluctance to take an active role in dealing with the bomb as well as his reflections at the end of the story show Don's stance on the issues.  As much as people tend to think of Leonardo as the polar opposite of Raphael's hotheaded behavior, stories like this one put Donatello in that position instead.

It should be obvious, I have no real qualms with this comic.  If anything, I could argue about the way humans are drawn, but really that is as much style here as it is detriment, so it's hard to be annoyed by it.  Besides, it doesn't detract from the story enough to be annoying anyway.  There is enough humor to balance out the seriousness of the story and the action beats flow smoothly.  The only honest regret I have is not getting to see Michelangelo school that one guy in how to use those nunchucks.