GUEST BLOG: TARZAN AND THE GODS OF OPAR

[THANKS TO DARRIN & RUTH SUTHERLAND OF WARLORD WORLDS, TREKKER TALK AND XENOZOIC XENOPHILES.]

Tarzan swings back onto the silver screen this summer in a brand new big budget film. So, this is the perfect time to revisit Tarzan in comics. If you are interested in reading some excellent Tarzan stories, you need look no further than Dark Horse Comics. They have published some beautiful Archive and Omnibus collections featuring artists like Joe Kubert, Russ Manning, and Jesse Marsh and this summer they will be publishing the Tarzan Sunday comic strips written and illustrated by Mike Grell from 1981-1983.

Today, we take a look at "Tarzan and the Gods of Opar" which is a 24 page story written and illustrated by Mike Grell that was published in Dark Horse Presents  issues 8, 9 and 10 in 2015. The story follows the events featured in the novel "Tarzan and the Jewels of Opar" written by Edgar Rice Burroughs in 1916. We hope you enjoy it.


On Lake Victoria in Africa a ship cruises along the shore line where elephants are grazing in the distance.

From the deck of the ship, Sir Richard, Miss Elizabeth Parker, and their safari guide Wilson are watching the elephants with binoculars as they discuss plans for the hunt. Sir Richard is keen to track down and shoot Bomani, the largest elephant known in the land. They plan to use a hydrogen balloon to spot the direction of the herd and then make their way by land to find the prize elephant.

Overhearing their plans, a tall and distinguished looking man wearing an expensive Saville Row suit comments that it is not a "fair chase". He then guarantees them that there will not be any elephants within 50 miles of them by tomorrow and he walks away. As the tall man walks away Sir Richard and Wilson are told his name is Lord Greystoke.

Miss Parker follows Lord Greystoke and attempts to apologize for Sir Richard's and Wilson's rudeness. She explains she is Sir Richard's biographer documenting his hunting expeditions. She is quite unhappy in this role, but has no money for a ticket home.

The next day, Sir Richard and Wilson ride up in their hydrogen balloon as planned even though a storm is approaching. However, they've anchored the balloon in place and they know they just need to gain enough altitude to find the elephant herd, but they are shocked to find that just as Lord Greystoke promised, there are no elephants in sight in any direction.

Watching from the ground, Elizabeth Parker is shocked to see the balloon break free from its tether and in the storm it is quickly blown away toward the mountains.

Fifty miles away a man is riding the giant elephant Bomani. While he might be known as Lord Greystoke by some, here in the jungle he is known by the name Tarzan of the Apes.

He spots the balloon flying fast across the sky, propelled by the winds of the storm. He is instantly concerned because they are headed over the Mountains of the Moon into the uncharted lands where Tarzan knows there is the Lost City of Opar. Whether he likes the men or not, he knows he must try to rescue them.

In the balloon, Sir Richard and Wilson are finally able to gain control as the winds subside. They spot the city in the mountains and descend in the hopes of finding a guide to take them back.

As they land they realize the city is ancient and are greedily excited to see gold domes on many of the buildings. Just then a group of primitive men rush them with clubs in hand. Wilson shoots one of the men with a gun and Sir Richard shoots a flair gun into the chest of another and the man bursts into flame. The other men drop their clubs and bow down to the new Gods of Opar. 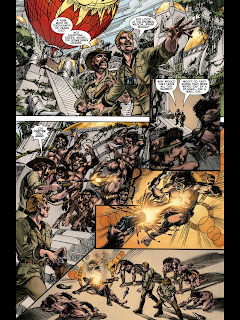 Swinging through the trees on vines Tarzan finally sees the City of Opar in the distance. It is late at night and he is surprised to see a woman sneaking outside of the city wall just as a huge panther leaps toward her. Tarzan swings down and jumps on the back of the panther with knife in hand and saves the woman. 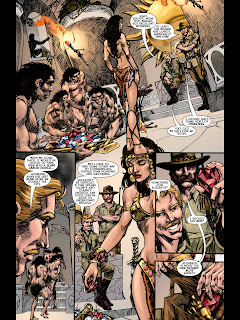 Her name is Oona and he asks her why she is outside the safety of the city walls and night and she tells him about the new gods. One of them wants her, but she wants nothing to do with him so she was trying to escape in the dark.

With this new information, Tarzan makes his way into the city. He hides in the upper window of the great hall where he listens in on a conversation between Sir Richard and Wilson. They are freely speaking in front of La, the priestess of Opar since she doesn't know English. They are amazed at all of the gold and jewels in the city. They plan to leave in the balloon with what they can carry and then return with well-armed men to capture the city and turn the population into slaves and take all of the treasure.

Tarzan surprises them when he jumps from the window. They quickly recognize him as Lord Greystoke, but are shocked to learn he is also the legendary Lord of the Apes. Tarzan turns toward La and begins speaking in her language.

Tarzan then turns and tells the men that this was once an outpost for the ancient city of Atlantis. It was populated by tall and beautiful priestesses and strong and sturdy miners who were there to dig for gold and jewels that would be delivered to Atlantis once a year, but that was all long ago before the city of Atlantis disappeared into the sea. 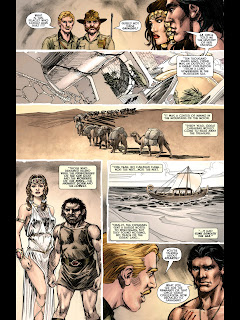 Tarzan tells Sir Richard and Wilson that they should follow him quickly and leave behind all of the treasure if they value their lives, but they have no plans to listen and when Tarzan turns to leave Sir Richard hits him in the head with a gold scepter.

Days later, the District Commissioner tells Elizabeth Parker the search for the lost men has been called off and that she should book passage back to England, but she explains that she has no money and walks sadly away.

Back in the Lost City of Opar, Sir Richard and Wilson are preparing their balloon for departure and have loaded the basket with some gold.

Tarzan's hands are bound by ropes and he is being lead to the alter near the balloon where the Priestess La plans to sacrifice him by cutting out his heart because he refuses to love her.

Sir Richard is there making a speech to the crowd gathered around the balloon, even though they can't understand a word he is saying.  He is even arrogantly telling them of his plans to return and take all of the treasure.

As they pass by, La asks Tarzan what is being said. As he translates, Oona, the woman he saved outside the city wall, overhears him and she secretly hands him a knife while La is distracted.

Tarzan calls out to Wilson to explain that due to the extra weight of the gold, they will need to drop a lot of extra ballast to get the balloon off the ground. Seeing that Sir Richard is already in the basket, Tarzan knows that he has already thought of that fact.

Wilson turns to find Sir Richard has a rifle pointed at him, but Wilson is quick and grabs the rifle and uses the stock to knock Sir Richard out of the basket. He face is covered in blood when he hits the ground and the gathered crowd now know they are no gods. Wilson pulls the release lever to drop the sand ballast and the balloon begins to float into the sky. 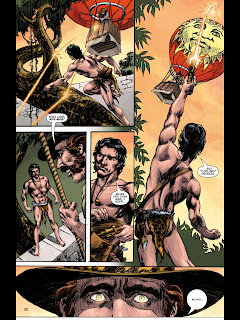 Tarzan uses the knife to cut free from his ropes. He knocks his guards out of the way a grabs the satchel from Sir Richard and leaps into a tree. Wilson begins shooting at him with a rifle as Tarzan pulls the flair gun from the satchel and fires. The flame hits the hydrogen filled balloon and it bursts into flames. 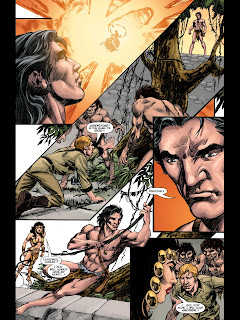 As Tarzan leaves, Priestess La decides she will now use Sir Richard as her sacrifice.

Back at the shore of Lake Victoria, a satchel is delivered to Elizabeth Parker. It includes a note from Lord Greystoke that simply says "Go home" and inside is giant red ruby cut into the shape of a heart.

We're long time fans of Tarzan and Tarzan by Mike Grell is a bonus. This is a great action adventure story complete with wild animals, jungle scenes, danger, and the bad guys got what they deserved in the end.

The art is gorgeous throughout with dynamic layouts and lush scenery and the period clothing and details are excellent.

The pacing of the story is excellent and the cliff-hangers used to divide the story into three chapters are exciting.

Jeremy Colwell's colors are wonderful as usual. He is one of our favorite colorists and here he helps create the wonderful atmosphere and tone of the book. Jeremy occasionally does colors for Ron Randall for his excellent sci-fi action series Trekker featuring bounty hunter Mercy St Clair.

The entrance of Lord Greystoke is classy and he looks dashing in his expensive suit. His figure fills the center of the page diving up the other panels on the page. 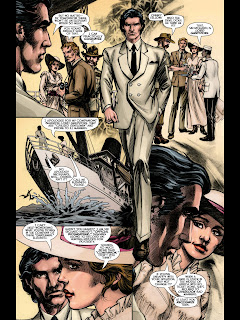 Mike Grell has a wonderful technique where he shades an area and then uses an eraser to create delicate designs. We've seen him use that technique on commissions and you can see an example of it around the head and hands of Tarzan on this page.

The scene of Tarzan riding the elephant with the herd in the background and the balloon being blown across the sky in the distance is terrific. I really love the perspective on that page.

The scene of Tarzan swinging through the jungle is stunning. The figure is drawn in a way that easily conveys his strength and the fast movement. 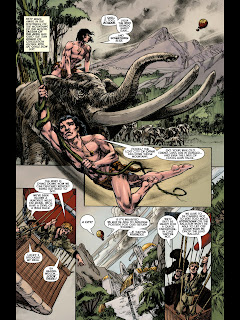 There are several dramatic splash pages including the page of Tarzan tackling the panther. That page has a classic feel to it.

Mike Grell uses a clever technique on the last page where he used the view of the heart shaped ruby in Miss Parker's hand to overlay the real bloody heart of Sir Richard being held by the Priestess La in the final panel. 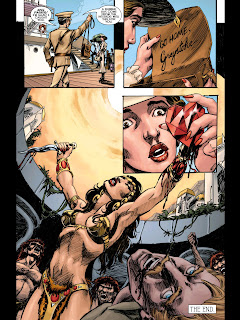 A truly excellent adventure that should satisfy any fan of Tarzan or action comics in general.
Posted by Clinton Robson at 2:00 AM