SYNOPSIS:  Our story begins "before the end of the world."  Phil, not quite Solar at the moment but instead a being of pure energy, stands before a woman who readers will recognize as Gayle, Phil's love interest.  He asks her to take his hand and experience what he is feeling.  Gayle runs away in fear, but Phil recounts that another woman, Erica Pierce, took his offer before later betraying him.  Phil also relates how he "consumed" a star and how he eventually tracked down Gayle again.  However, Phil's intense radiation is so overpowering that it literally destroys Gayle. 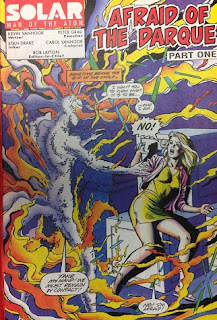 Turns out, Phil has been relating all these events to his therapist while under hypnosis.  Phil gets upset by realizing how upset Gayle, not the Gayle he killed, has gotten over being shown Phil's memories of the old world--the world that he apparently destroyed with his powers before bringing about a new world populated by recreations of the people from the old world. (For a better recap, read issues 1-20, apparently)  The upset Phil transforms into Solar and flies off.

Meanwhile, in a private sanctum, Master Darque meditates.  He speaks to his companion Sandria that he has discovered a source of massive death and necromantic energy. He refers to Solar as the Sun-God, and he intends to eat said Sun-God's soul. 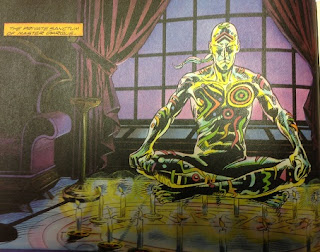 Cut to space, just outside of Earth's atmosphere.  Solar laments all the problems and pain he feels he has caused ever since gaining his powers.  As he opines he drifts toward the moon, recalling he hasn't been there since he slaughter the Spider Aliens. Thoughts of whether what he did was murder or defense of humankind fill Solar's head before he destroys what remains of an empty base and alien corpses on the moon. 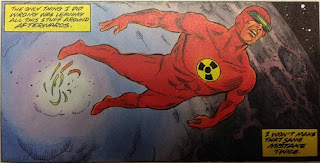 In California, Gayle and her friend Sarah discuss Gayle's current situation with Phil.  Gayle describes it as though Phil is using her to relive an old romance with a different woman who is similar to her as opposed to him trying to relive a romance with her because they are more or less the same person.  Phil surprises Gayle at work. He appears, not as Solar, looking disheveled and unkempt.  He begs for Gayle to take him back and come back home. She says that she isn't sure she wants to and comments on his appearance, to which he replies that he looks how he feels. However, Phil uses his powers to clean up his appearance just as Sarah reenters after having left the two alone to talk.  It feels like a page or a few panels are missing because next moment Sarah is gone again. Gayle says Phil isn't acting like himself and he bounces between feeling like somebody is controlling him to blaming everybody but himself before storming out of the room. 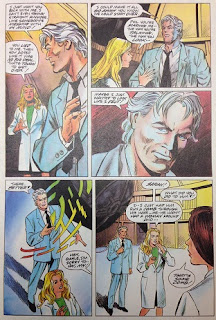 Later that day, Phil is lost in thought at work and nearly causes serious damage. A colleague yells at him to which Phil responds physically before calming himself and excusing himself for the rest of the day.

That night at home, Phil chides himself over his increasing paranoia.  He begins to slowly realize that the Gayle he loved is not the Gayle that he recreated and the romance has left their relationship. John the psychiatrist calls.  Phil says that he is starting to get over Gayle while in reality he is projecting images of them together as a loving couple.  Phil ponders how easy it would be to give life to one his illusions, complete with infinite infatuation for him, but he decides he is done playing God.  However, his illusion begins to discuss this idea with him, insisting that he has both the power to create and destroy. This voice is created by Master Darque.  Darque reveals to his sister that he wishes to use the death energy to open a gateway in the Bayou in order to obtain even more evil powers. 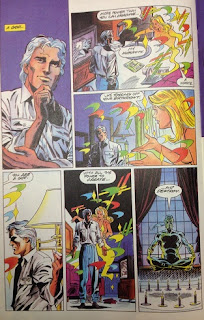 Two days later in Oregon and SUV approaches a small home deep in the woods.  Gayle gets out of the vehicle, pets a cat, and knocks on the door to the house.  An older woman answers.  Gayle addresses her as Mom and says "It's happened again." 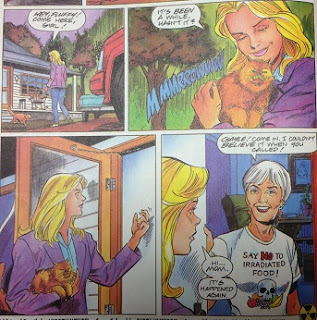 MY THOUGHTS:  For those unfamiliar with the story of Solar, this issue is a little bit of a tough time to come on.  My reading of Solar is spotty at best, so I only know the cursory details. Most of my reading actually comes after this point, so I might only be slightly less confused than somebody who never read any of it.

As you can probably tell, this is an exposition issue that furthers the subplots of our protagonist and his supporting cast.  The relationship between Phil and Gayle really is the driving force behind a lot of the events throughout Solar Man of the Atom.  As much a reader might want to jump in and see a guy with extreme powers like Solar fight off swarms of Spider Aliens and the like, as often as not time is spent focusing on Phil/Solar and Gayle as they go about their lives.  However, this issue we also get to see Master Darque, who is primarily a character from books like Shadowman and The Second Life of Dr. Mirage.  This is a character who had his own sub-plots moving in and out of other books, so the connection to the overall Valiant universe of books is appreciated.  I also enjoy the contrast between Solar and Darque as symbols of light and darkness.

The story itself is well-written, if just a tiny bit hamfisted in its treatment of Phil's growing paranoia.  When it is revealed that Master Darque has apparently been helping further Phil's mental instability, many of the forced moments make sense.  I enjoyed the fact that Gayle is smart enough to take action to get away from her bad situation with Phil.  While the comment to her mother isn't elaborated on this issue, readers can assume that she's referring to her relationship with Phil and that something like it (abuse, obsession, etc.) has happened before.  She may be referring to tracking her down like Phil discussed at the first of the issue.  As I don't have issue 22 I honestly don't know.

The art is wonderful.  I have always enjoyed Solar's design. His costume is Silver Age simplicity at its finest. In true Valiant style, though, the art team gives Solar's powers special effects that set it apart from other characters. The colors and designs draw a reader in and hold interest, easily selling the book on those aspects alone.

The colors on everything else, though, seem a bit muted compared to other comics coming out in the same time period.  Where other books had pages bright vivid colors, Solar's panels are a throwback to the color schemes present in comics more from the 70's and early 80's.  However, this isn't necessarily a terrible thing.  Solar feels like a mix of 1960's designs with colors from a 1980's independent publisher with a 1990's story that doesn't quite get too extreme.

All in all, this isn't a bad issue.  It's just a poor jumping on spot for a book.  While it is the first part of a new storyline, it relies too heavily on previous events to be able to effectively keep a new reader interested for long.  Hardcore Solar fans were probably on pins and needles trying to find out if Gayle and Phil were truly over as a couple, but casual fans like myself would need to get caught up on what happened before for it to be truly meaningful.  In the end, however, this is a lot of story packed into a single issue and pretty decent for a casual read, if you can forgive wandering around lost for a little bit. 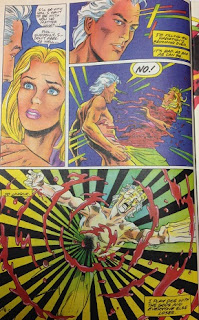 Posted by Clinton Robson at 3:31 AM