SYNOPSIS: Arcadia, a city where, if you don't play by the rules, you might be the next corpse. X is a vigilante who warns with a single mark. If bad guys don't take the hint, he makes the second mark in the most extreme ways possible.  Daring to do what he deems necessary to clean up the city of Arcadia, X is prepared to wage his one man war against the corruption running rampant.


MY THOUGHTS: Comics' Greatest World was Dark Horse's attempt to move into a somewhat more traditional superhero market while keeping the edgier Dark Horse approach.  In this line, there were multiple story arcs. They were generally four issues long with each arc set in a different fictional city in the Dark Horse universe.  Essentially, these stories featured characters and settings in what were more or less pilot episodes for potential series.  Several characters were given ongoing series to varying degrees of success, including X, Ghost, Titan and Barb Wire. 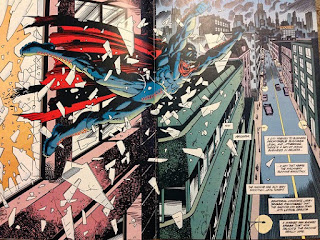 The book opens with a prologue about an alien encounter, which I presume runs throughout the CGW books as a subplot tie them all together somehow.  Turn the page and we immediately cut to a two-page spread of X diving out a window several floors above the street.  The issues continues with X's attempt to escape capture by police and SWAT officers after the murder of a criminal.  He continues to elude them until a minor confrontation is inevitable.  After fighting off the officers and disappearing, the Arcadia police force asks to call in the specialist team known as the Pit Bills.

Prosser writes a great story without complicating matters here.  This is a story that isn't meant to tell an origin but instead present the reader with a series of action beats that will easily let the audience know what to expect from X's adventures.  X is a character who wavers between vigilante and anti-hero.  It is very clear from Prosser's story that X is very serious about cleaning up crime in Arcadia, but not necessarily in the way somebody like Batman would.  X is closer to a character like Grendel, but not quite to that extreme nor quite that manipulative. There are only about 15 pages of story here, but all of them are used to their fullest to draw a reader into the action-packed world of X.

As fun as the story is, Warner's art sells it even more.  Nowhere throughout does the art waver in quality or consistency. The art is the traditional superhero fare but with 90s Dark Horse quality and refinement.  It is enough to draw a reader in and keep him/her hooked, yearning for that next page to appear. 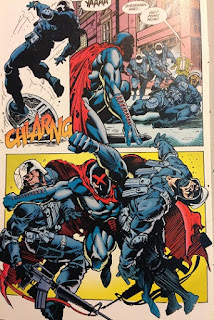 X's design should be addressed.  At first glance he's simply a two-tone superhero with a catchy gimmick with the x on his mask and only one eyehole.  However, there's more to it than that.  The lacing on his boots, arms, torso...all red x's.  It may be a bit of overkill, but honestly it is subtle enough that it took me several examinations to really catch what was going on.  Consider it a subliminal advertising tactic.  On top of all this, X's costume design is more or less grounded in a realistic design. His costume is essentially made up of stuff that can be purchased in a department store with a few adjustments and alterations here and there.  It is the simplicity that makes his appeal complex.

There's not much else to really say about this book.  Fifteen ad-free pages for a single dollar in 1993 was pretty good, especially coming from Dark Horse.  It ends on something less than a cliffhanger and more of a "To be continued" from a weekly TV show.  Gotta admit, I regret not having the next issue. 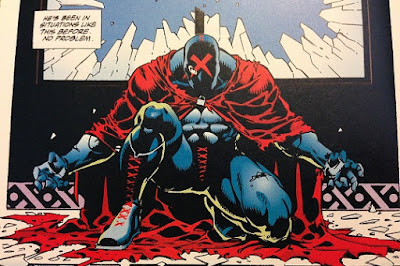